Arjun Sengupta, economist and former member of Parliament, famously dubbed Yashwant Sinha the “original reformer". It is a tag that would baffle most, especially those fed on the steady chorus of self-appointed cheerleaders of Manmohan Singh, who delivered the epoch budget of 1991.

Nonetheless, it is a fact that the Congress, under the leadership of Rajiv Gandhi, had pulled the rug from under the minority regime headed by prime minister Chandra Shekhar by withdrawing political support, forcing the government to opt for an interim budget in March 1991. Though constrained, Sinha, then the finance minister, had given glimpses of the far-reaching reforms being considered by the establishment to deal with what was a full-blown economic crisis in the making. Significantly, the key man, Singh, was an adviser in the prime minister’s office at the time and had a bird’s-eye view of what was unravelling.

If nothing, it laid down the principles—the need for fiscal discipline, including targeting and cutting subsidies, introducing the concept of fiscal deficit as the metric to measure fiscal discipline and divestment of up to 25% of equity from select public sector undertakings—which formed the basis of the benchmark budget presented later in July by Singh and the new mantra for economic policy thereafter. 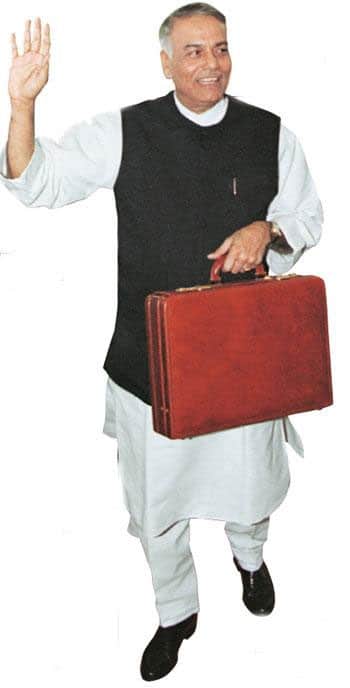 This slight has always irked Sinha, and has been articulated in a tell-all biography of his years at the helm in North Block (Confessions of a Swadeshi Reformer, published in 2007). Understandable for someone who made it in the murky world of Indian politics without any established pedigree or familial connections, and went on to be the first non-Congress finance minister to present five Union budgets. Maybe it was the lack of political background that came in the way: In politics it is not what you do that is important, instead it is what you are seen to be doing.

Sinha had come close to quitting the Indian Administrative Service (IAS) seven years after he joined the service in 1960. This was after a run-in the young district collector had with the then chief minister of Bihar, M.P. Sinha. He promptly approached Jayaprakash Narayan, social reformer and his idol, for counselling.

Convinced that it was too early in his career, Narayan advised him against joining politics. However, 17 years later, he took the plunge and quit the IAS, 12 years prematurely. Mentored by Chandra Shekhar, he joined the Janata Dal headed by V.P. Singh. 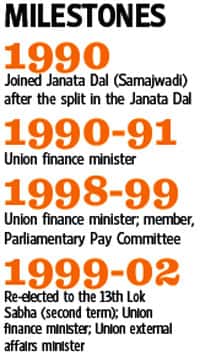 In 1991, the country’s balance of payments crisis worsened so dramatically that it was at risk of a sovereign default. This would have been disastrous. Eventually, to avoid a default, it was decided to mortgage 20 tonnes of gold with the Bank of England to raise $400 million (around 1,800 crore now). It was a politically tough decision: akin to mortgaging the family silver. According to Sinha, this decision haunted him for the next 10 years, with his political opposition always targeting him for the deed. “It was my most important achievement to prevent India from defaulting on its foreign loan commitments," recalls Sinha.

His next stint in office, in 1998, was as a member of the Bharatiya Janata Party (BJP), the leader of the National Democratic Alliance (NDA). Not only was India recovering from the currency meltdown in South-East Asia in September 1997, its decision to go in for nuclear tests invited global economic sanctions. Once again, the country’s foreign currency reserves were under siege, provoking Sinha to launch the Resurgent India Bonds in August 1998—they raised $4.3 billion.

A year later, with the NDA facing a fresh election challenge after losing a vote of confidence in Parliament, the country was caught up in another conflict with Pakistan in Kargil. Sinha’s third stint in office happened against this backdrop; and, then, the crisis involving the Unit Trust of India. “Not one (budget) year was a normal year," Sinha says.

If there is one thing the middle class has loved about economic reforms it is the unbridled access to consumer goods—at least till resurgent inflation started eating into this dream over the last two years. This was made possible by Sinha’s politically bold decision to reduce administered interest rates—read this as those guaranteed on Provident Fund investments and small savings. Between January 1999 and March 2002, this rate was reduced from 14.5% to 10.5%; this was reduced further to 9.5% by Jaswant Singh, who succeeded Sinha.

This led to the softening of the interest rate regime and created the basis for the consumer credit revolution that was to follow in the new millennium. Alongside, Sinha introduced tax breaks on loans for housing.

These two measures triggered an unprecedented investment boom in

the real estate sector. It also changed the age profile of the investor (making him younger), stoking aspirations. As Sinha puts it, “There was a mindset change from saving and buying (an asset) to buying and saving."

While sections of the new middle class loved it, Sinha’s own constituency Hazaribagh, populated by coal industry workers, took adversely to the clampdown on interest rates on their savings—a political price he would pay in the 2004 general election.

By the time Sinha returned to North Block in 1998, the economy was recovering from the crisis. To the credit of two finance ministers, Sinha himself and P. Chidambaram, they continued to push the envelope on reforms. The difference from 1991 was that this was not reform happening due to desperation; instead, it was through a modicum of consensus. The effort to dismantle the stodgy tax structures began in 1991, but was accelerated in the mid-1990s. This largely involved reduction in steep import tariffs, rationalization of excise levies and the bold move to cut direct tax rates (Chidambaram).

Riding on this success, the time had come to move on to the next stage of indirect tax reform: introduction of the value added tax (VAT). Since the participation of states was critical to productionize the plan, Sinha set up an empowered group of finance ministers, something that has endured and is now playing yet another pivotal role in preparing the country for the final stage of indirect tax reforms—introduction of a single goods and services tax.

Similarly, it was Sinha who set up the National Statistical Commission under the chairmanship of former RBI governor C. Rangarajan; eventually this led to the creation of an independent statistical authority. The decision to bring the country’s regulatory system up to speed with the rest of the world through a new competition policy was also initiated by him; eventually the Competition Act was notified in January 2003 and the Competition Commission in October of the same year.

Somehow, despite these accomplishments, Sinha has never got his due. More significantly, the BJP failed to monetize these into electoral gains or in repositioning itself. Interestingly, he was shunted out midway through his third stint in North Block. A moment that he recalls with disappointment: “As Mr (Atal Bihari) Vajpayee told me you have done good work in finance. But the perception does not match."

It is not surprising that in a party with an overt Hindutva tilt, Sinha, with his socialist roots, would have been out of place. Presumably, it was his anti-Congress sentiments that drove him to the BJP. “It was not just blind anti-Congressism that drove me to JP, Chandra Shekhar or BJP. Since I dealt largely with the economic portfolio, I had little do with the socio-political decisions, there was no problem working in the BJP. And I had the complete support of the PM (Vajpayee)."

It only hurts that much more. On the one hand, the party’s subtle rejection rankled and on the other popular, history has ignored Sinha’s legacy. It is a tough place to be in. So looking back, would he rather have gone the populist route and avoided politically unpleasant decisions?

“Will I make that same mistake again? No!"