Ahmedabad to Udaipur: City and the lake

The challenge of planning our annual get-together is always mine. Last year, in a “pin the tail on the donkey" manner, I put my finger on Rajasthan, and found befuddled faces staring at me. It was the monsoon season, and while the desert state is considered to be the perfect winter destination, we were not sure about a rain-soaked Rajasthan.

Udaipur, we discovered, was delightful in early August. The crowds are thin and the Aravalli range is verdant.

The four-and-a-half-hour drive passed by in no time—the highway connecting the two cities is smooth. You can easily spend a week exploring Udaipur and its surrounding areas, but three days are sufficient to see the highlights and immerse yourself in the city’s many charms. The narrow lanes of Udaipur are densely packed with numerous heritage-themed hotels, temples, markets, and the star sight—the City Palace. The craggy Aravallis enclose the city in a protective embrace.

From Udaipur’s array of accommodation, we chose a base close to the old city, home to all the action. The first day, we stayed indoors to escape the muggy afternoon heat, heading to Bagore Ki Haveli in the evening to watch a music and dance performance. The open courtyard of the waterfront 18th century home doubled up as a stage where local men and women dressed in colourful clothes twirled and whirled to the sound of folk instruments.

Come night and Udaipur turns into a canvas of twinkling lights, a sight we enjoyed from the breezy Gangaur Ghat, the main stepped edge of Lake Pichola. It was from the roof-top dining area of Lake Pichola Hotel’s Upre restaurant that we first caught sight of the City Palace. It stood resplendent and luminescent, such a magnificent sight that it was hard to take our eyes off it. 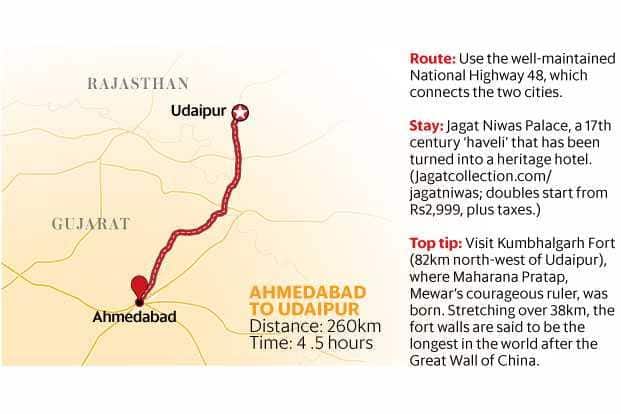 The next morning, we headed out to visit it. The palace is an amalgamation of buildings constructed over four-and-a-half centuries by rulers of the Sisodia clan, but the architectural elements come together seamlessly to create one breathtaking structure. The Mardana Mahal and Zenana Mahal, restored painstakingly, offer a wonderful glimpse into the life of the Mewar dynasty. We climbed many narrow, winding staircases that open into large courtyards, and walked through gorgeous rooms filled with artefacts, miniature paintings and weaponry.

One highlight of the palace is the Crystal Gallery, with its collection of exquisite crystal objects, including tables, chairs and a bed. In 1877, maharana Sajjan Singh commissioned the Birmingham-based F&C Osler Company to create custom-made crystal objects for his personal use. Unfortunately, the maharana died before the consignment arrived and the shipment lay forgotten, until it was opened and displayed in 1994.

Outside the palace, the old city thrives in packed alleyways and busy bazaars. To find a patch of quietude, we climbed the flight of steps leading up to Jagdish Temple. Built in 1651, the intricately carved temple, made of white marble, is dedicated to Lord Vishnu. Locals still flock to the temple where the evening arti drowns out the sounds of the chaotic marketplace and traffic, creating a surreal experience.

But it was on a boat ride later that evening, somewhere in the middle of Lake Pichola, that I found the ideal spot, the spot from where Udaipur shone in all its glory, truly the city of fairy tales.

Weekend Vacations offers suggestions on getaways that allow for short breaks from metros. The author tweets from @07Chaitali.