The carb lovers guide to ‘khichdi’

There is an amazing variety of regional takes on the 'khichdi'; from bisibelebath to a Parsi version with prawns. Where can you get them?

It may have been popularized through the Mughal courts and subsequently fallen from grace, but nine out of 10 people will probably name khichdi as their comfort food of choice. A versatile dish, it can taste as gentle or as raucous as you like, be eaten plain or with a variety of accompaniments, work as a quick carb-protein solo meal or a labour-intensive spread fit for kings—or guests. When it comes to khichdi, the whole is always greater than the sum of its parts—and that’s no mean feat when every part of the country has its own unique take on the dish.

The most intriguing interpretations of the Indian staple, and where you can sample them: 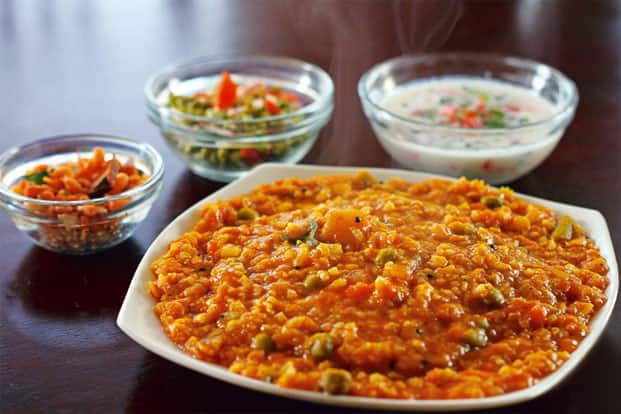 In Jiggs Kalra’s book Daawat, Welcomgroup chef Praveen Anand writes, “(Pongal) the harvest festival accords top priority to feasting and pongal is cooked both sweet and savoury, leaving a lingering aftertaste." Pongal has always been prepared in temples, consecrated by prayers and then offered to devotees as prasad on festival days. Nowadays though, savoury pongal has transcended religious connotations to become a popular breakfast dish.

And so you have ven pongal, made with husked moong dal and rice, drenched in ghee, and flavoured with pepper, chillies, cumin and curry leaves. It is often eaten with kozhambu, a light vegetable and lentil stew.

So popular is pongal that its long fingers have even made their way into Kellogg’s, which recently introduced Simply Pongal Oats, blended with moong dal, curry leaves, cumin and pepper.

The basic Gujarati khichdi is a mix of moong dal and rice, cooked with turmeric and salt until soft and runny. A simple, moreish dish, it can be eaten as is or with accompaniments. “At Agashiye (a restaurant), we serve this plain khichdi with vaghar, which is garlic and onion sautéed in ghee. It is eaten along with papad, and sweet and sour kadhi made of besan, and curd. Khichdi can also be eaten with rasawala bateta (curried potatoes), baflo (a preparation of raw mango) and mango pickle," explains Niti Mehta, nutritional consultant at The House of MG, a boutique heritage hotel in Ahmedabad.

A rainbow of khichdis has followed this basic dish: ram khichdi, a vegetable-laden version; Swati Snacks’ wildly popular baked masala khichdi, made with rice, chawli and whole moong; Soam’s vaghareli (fried) khichdi. Achaya, in The Story Of Our Food, writes about a type of Gujarati khichdi called lazizan, suffused with pistachio, raisins and spices, and apparently a favourite of emperor Jehangir.

The Parsi take: Parsis have borrowed many khichdi dishes from their Gujarati brethren, but they take it a step further. The Bharuchi version of the vaghareli khichdi has rice and four types of dal (toor, chana, masoor and moong), cooked with masala-slathered and fried Bombay duck. There is also the felicitous Parsi coupling of khichdi with prawn. But most popular of all are khichdi patio (the patio made of prawn or fish cooked in a tomato-based gravy) and khichdi saas (seafood cooked in a glutinous, sweet-and-sour white sauce).

At Ratan Tata Institute outlets, across Mumbai (they have a daily menu, so call ahead to check availability); and Rustom’s, Adhchini, New Delhi.

The most basic Maharashtrian khichdi is the moong dal khichdi, so liquidy that it runs to the rim of the plate. The mugachi khichdi is flecked with goda masala, a dark-hued Maharashtrian mix made of powdered coriander, cumin, sesame seeds, asafoetida, cloves, chilli, turmeric, cardamom and coconut. Sabudana khichdi, usually regarded as fasting food, does away with rice and dal, using sago seeds as a substitute. The pity is that Maharashtrian cuisine is almost impossible to find outside its home state.

Come October and Durga Puja pandals pop up across localities, each serving the simple Bengali bhog. The must-have is the creamy Bengali khichuri, simmered in huge handis for hours. Although most Bengali caterers are loath to reveal their exact recipe, home-made khichuri is easy enough: rice and moong dal cooked in a pressure cooker with ghee, ginger and whole garam masala, and usually eaten with bhaja (fritters of potato, brinjal or squash).

Sometimes, the khichuri itself comes studded with sautéed vegetables like cauliflower and carrots, a delicious one-pot meal. Khichuri is also an inseparable part of the monsoon in Bengal, when it is invariably paired with crisp-fried hilsa, just coming into season and heavy with roe.

So insidious is the reach of the khichuri that Swami Vivekananda is believed to have concocted a non-vegetarian version, with eggs, peas and potatoes, according to biographer Sankar’s Monk As Man: The Unknown Life Of Swami Vivekananda.

Synonymous with lavish repasts, the nizams are supposed to have created the kheema khichdi with lamb mince, basmati rice and masoor dal, although some recipes don’t bother with the lentils at all. The mince is spiced and cooked with the dal and chawal in a sealed pot. When it emerges, each grain of rice should be fluffy and separate. The khichdi is eaten with khatta (tart chutney made with tamarind), papad and pickle. It’s not easy finding an authentic version outside homes today, so try it before it is swept off the table in the juggernaut of modernity.

There are other khichdis, of course—the Sindhi patri khichreen, the Anglo-Indian kedgeree, the Bihari arhar dal ki khichdi, to name a few—but to taste them, you will have to invite yourself to someone’s home. They are rarely seen on restaurant menus.

What to eat at Mumbai’s Khichdi Samrat

Any eatery with ‘khichdi’ in its name deserves an honorary mention here. Ignore the extras at Khichdi Samrat, a tiny eatery in Mumbai’s CP Tank area, and go straight for the ‘khichdi’ section. Almost every ‘khichdi’ at Khichdi Samrat is a fancy version of the plain ‘khichdi’ that they also serve.

Try the Hariyali Khichdi, a deep green-coloured dish that is thick with spinach, garlic and mint. Or the Special Vrindavan Khichdi, a testament to the owners’ origins in Mathura; it is tempered with tomato and peas. There is also Makai Khichdi, a Cheese Khichdi, and to sweeten your mouth, a Dry Fruit Khichdi. Mix and match with the various ‘papads’ on offer. Then, wash it all down with Samrat’s ‘chatpata chhas’: It is famously served in a beer bottle!