From gin and tonic to vodka punch, the best summer spirits

As the sun begins to turn up the heat, I turn my thoughts to the best drinks to quench the thirst that starts to arrive just as the working day comes to a close. It is the best time of year to be playing with neat spirits, mixing cocktails or throwing together a cooling punch. In fact, there is a real move to the super-punch, as I like to call it: pre-bottled, pre-batched cocktails, ready to pull out of the fridge (or the ice bucket) whenever the mood takes you. 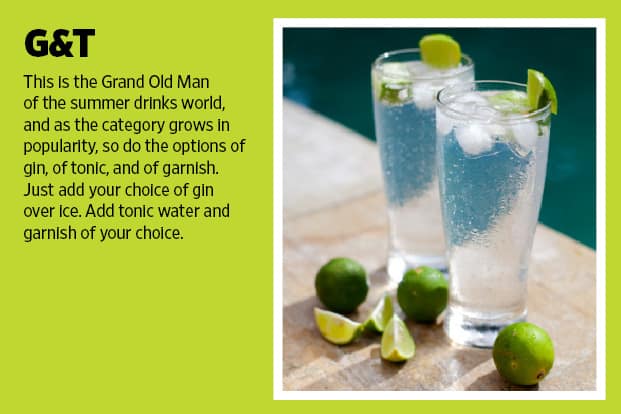 There are wonderful, more complex cocktails to make that will give you a glow the sun simply can’t, and refresh places where water can’t reach. But then there are also easy-to-make drinks that take little preparation and, with a small amount of forethought, can be the jewel in the crown of any summer party.

So, let’s start with some basic rules of drinking in the summer:

Rule one: You’ll need good glassware. A summer drink is mostly about fun and, therefore, it is about drinks in long glasses or tumblers, something that a solid base is preferable. These, along with pretty much everything else, should be stored in the freezer.

Rule two: Ice. You’ll need ice. Lots of it. Far more than you’d ever imagine. How you do this is up to you, but I like to buy bags of ice. At the end of the day, it won’t go waste so it doesn’t matter if you don’t use it all. But it does matter if you run out of ice. That’s game over. An alternative to buying in, and my safety net, is to fill Tupperware boxes with filtered water. When they freeze, you can simply chop off shards which look very cool in a G&T or Negroni. Last summer, I was at a party where they ran out of ice. I ended up saving the party by making cocktails using the children’s ice lollies from the freezer, chopping them up to use as an ice/juice substitute. Don’t let this happen to you. I won’t be there to save you, and your kids will wonder what has happened to their weekend treats.

Rule three: It’s summer, so you’ll need a garnish. Pre-chop some lemons, some limes and some orange. If you like, you can keep these in the freezer, too. That way, they act to keep the drink cool along with the ice. It’s a win-win situation.

Rule four: As with ice, don’t run out of mixers. Some people love strong cocktails where the only mixer is ice. Others simply like a drizzle of tonic with their gin, but most will want a fair amount. So again, don’t run out. Oh, and if you can, don’t buy big bottles, use small cans. These are automatically fresh. There is nothing more depressing than the dull ‘fuff’ of a bottle of soda water that has been open for a week.

Rule five: Have lots of water handy. It’s hot. That’s why you’re making these damn refreshing cocktails. But make sure there is a lot of water about. When it is hot, people want to drink. And if all they are drinking is cocktails, you’ll find people passing out left, right and centre. And this applies to yourself as well. So just make sure you have some nice, iced water with either cucumber or mint in it, always topped up. If nothing else, you can substitute your vodka and soda for water, giving the impression of keeping up with your friends, but maintaining the balance of sobriety and hospitality which any good host should have. This goes for your guests as well.

So, these are the five rules of summer drinking, but how best to apply these to actual drinks?

Let’s start with one of the greatest drinks of all time: the gin and tonic. I have previously written in these pages that understanding your choice of gin is the key to ordering a good G&T, and my stance has not changed since I last mentioned this. In fact, my position in this regard has strengthened, partly due to the importance of showing the bartender that you have at least a basic grasp of different spirit brands. (You don’t just drive a car, do you? You drive a Mercedes or an Audi. In the same way, you don’t just drink a gin. You drink Beefeater 24, or Tanqueray 10.) But mostly because the number of gins being developed and produced around the world at the moment is simply mind boggling. If you don’t order the one you want, you’re leaving yourself open to the gin-lottery. And, as anyone who has played the lottery will know, you don’t often win.

In terms of drinking out, that’s about the only rule to remember: know your gin. At home, however, it is a different story. The way you serve your humble G&T can speak volumes about you, so be prepared and the first four rules that we discussed are very much the key to this. With specific regard to rule number one: I like a tumbler (the Old Fashioned glass as it is known) rather than a tall glass for my G&T, but this really is up to you. One simple reason is this (and it is a great trick to know): if you are keeping your glasses in the freezer, you can simply pour a small amount of water in the bottom of each one first. This freezes at the bottom and when you add your gin, it will slowly release the iced section, giving you instant ice in your G&T. No need to touch the pre-made stuff, which you can use later on. Simple! 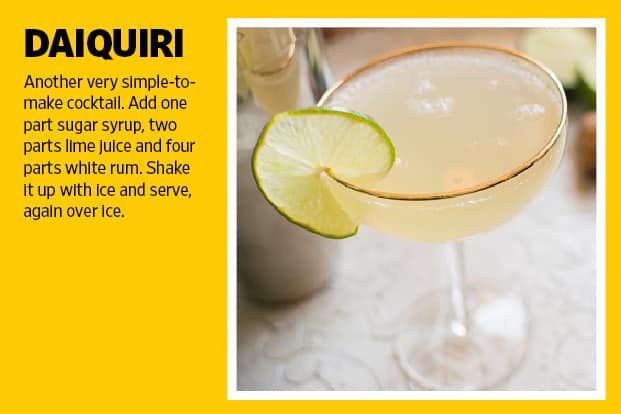 This drink is so simple that I actually made one in an airport lounge a couple of weeks ago. Ignore the fact that the local time was 5.30am (it certainly wasn’t on my body clock), I made the sugar syrup using the white sugar destined for tea and coffee with some bottled spring water, squeezed a whole lime into a glass and topped up with rum. After adding ice, I stirred it down and did my best to ignore the rather strange glares from the red-eyed business travellers in suits, clearly jealous of my ability to whip up a cocktail at a moment’s notice. Either that or, more likely, simply jealous of me not heading to a major meeting, as they were... Lots of vodka. This, I find is the most effective use for the clear distillate, when it comes to summer drinks and employs all the rules stated above. If you are brave and like what you have created, you can make your punch posh by pre-bottling it into nice bottles and serving it as a ready-made drink, with a straw. Much less hassle than dribbling your concoction all over the table with a poor ladle (becoming increasingly more wobbly the more you drink).