The temporary state of retirement

The temporary state of retirement

At the All England Lawn Tennis and Croquet Club, one of the best places to spot a former player is outside the press centre that also hugs the Members’ Enclosure on the first floor opposite Centre Court. At the building’s entrance below, it’s not uncommon to see Chris Evert, Lindsay Davenport, John McEnroe and the like storm in and out of this building.

But what’s the hurry, you wonder? Aren’t they supposed to be retired?

Think of retirement and you visualize going on a holiday or perhaps even going to Wimbledon to spend a day. But don’t expect to spot Steffi Graf, Evert or McEnroe on a seat next to you in the stands munching popcorn. So what do former Wimbledon champions do once they retire?

Different players walk different paths. One of the most popular occupations is commentary. Apart from the familiar Vijay Amritraj on ESPN-Star Sports, the likes of McEnroe, Boris Becker and Martina Navratilova do commentary through the two weeks of Wimbledon. The 1991 men’s champion, Michael Stich, was a TV expert for the BBC till about two years ago. 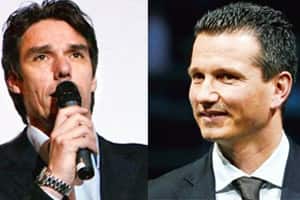 “Commentary is not easy," says 1997 champion Martina Hingis, over email. “I have done a bit (for Eurosport and Channel Seven) and it was a good learning experience for me." These days, apart from playing seniors events and exhibition matches, she guides players on the juniors’ circuit at the Mouratoglou Tennis Academy (MTA) in Paris.

“I enjoy watching them progress and it’s important to give back to the sport that has given me so much," she says.

Conchita Martinez, the 1994 champion, says she enjoys both commentary and coaching. “It is a good combination, it makes me stay current," she says.

“It works differently as to what s/he wants to do after retirement. Carlos Moya (former French Open champion) has won seven straight tournaments on the ATP Champions tour," says Leif Shiras, a broadcaster for Sky Sports and a former pro.

Managing tournaments can also be a full-time job. Richard Krajicek has been the tournament director of the ABN Amro World Tennis Tournament in Rotterdam, the Netherlands. “The first six months of retirement were tough," says Krajicek, the 1996 champion who retired in 2003. “For the first two or three months, it was a relief, like a holiday, as if the burden and stress of watching my diet had gone. But after two or three months, I really started to miss the competition. They talk about the ‘black hole’ into which athletes sometimes fall, and I really was in a black hole," he told the BBC in 2004. Krajicek is a regular on the Champions Tour.

Stich is the tournament director of two events in his country, Germany: in Hamburg (Bet-at-home Open) and Braunschweig (the ATP Challenger event).

Some get associated with social causes. The Andre Agassi Foundation for Education runs a school in 1992 champion Agassi’s home town in Las Vegas that gives opportunities to children from economically challenged backgrounds. The Michael Stich Foundation focuses on children with the human immunodeficiency (HIV) virus; it helps them with treatment and rehabilitation. “We have a long way to go as a society to get there but I’ve been doing this now for 18 years and have a vision where I want to be in the next 20 years," Stich says.