Mark Henderson’s professional credentials—director, the Walpole British Luxury group, deputy chairman, Gieves & Hawkes, and chairman, Savile Row Bespoke—are as impressive as his suit. “A bespoke Gieves & Hawkes, unsurprisingly," he says of his impeccable blue single-breasted complet, matched with a blue-and-white striped shirt that can only be described as natty, and a bottle-green knitted tie; the beautiful, if niche red-carpet choice for edgy young British actors, and perhaps one of the most pleasing of the 1970s retro trends that have shown up increasingly over the last year in British design. “The texture of these really makes all the difference," he says. 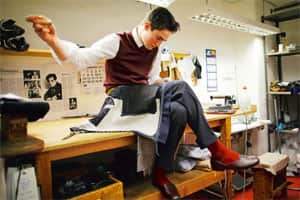 It is an excellent time to reflect on what makes classicism and quirkiness two contrasting, but oddly harmonious hallmarks of British fashion. “There is something comforting about heritage, in luxury in particular," Henderson says about the British aesthetic. “The Savile Row suit has lasted 150 years. (But) if you go to some of the classic British social scenes, Henley or Ascot, you see that there is an eccentricity to the way we do things."

Winningly, British designers have used that heritage in a way that still seems unthinkable in France or Italy, where, for all its flair and craft, fashion remains in deadly earnest.

How does all this dialogue translate to the suit? We have seen them tend to extremes in recent years. Classic three-piece and double-breasted outfits having made a terrific impact on runways and red carpets alike. At the same time, silhouettes have been compressed from slim to terrifyingly slim. Italian outfitters have superb traditions working with both those aspects. But Savile Row has had a good decade in the critical eye, and, thanks to designers like Richard James and Ozwald Boateng, is not just a place to indulge in the “experiential" quality of British luxury, to quote Henderson, with the tailoring and the bolts of cloth and so on. It’s also sharp and fun.

“Forget the label," Henderson says about having a suit made. “Suits are investment garments, and I hate to see people who’ve bought something just because it’s fashionable. There’s always a roundabout going as far as fashion is concerned. ‘Are double-breasted suits in? How wide or narrow are the lapels?’"

“We’ve just had two seasons when three-piece suits have been extremely strong. Everybody is wearing evening wear. So you can have dinner jackets or tuxedos, but not necessarily with the classic bow tie. You might just be wearing a black shirt, or a white open shirt, and it will look fabulous. But the key thing is the fit of the jacket."