No head, no head! Pat on back," our safari guide Stephan, a handsome Creole man, instructs a motley group of 11 tourists who are walking with lions at the Casela Nature Park on the west coast of Mauritius. Instructions are necessary: None of us have done this before.

The two lion cubs we are walking with—each one-and-a-half-years-old—are a temperamental duo. One of them, Lundy, parks herself on the grass barely 5 minutes after we have started. Stephan tells us that the walk can last for anything between 20 minutes and an hour. “It all depends on her," he says, as he plays with Lundy, holding up a piece of meat to distract her from pouncing on a bird. 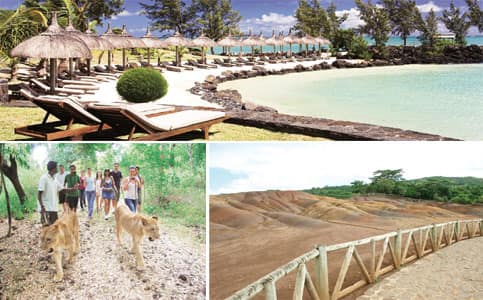 What made my first big cat experience even more exciting was that it was happening in Mauritius, an island I had put down as “lazy honeymoon fare" for schmaltzy couples. Without doubt, its luxury resorts, associations with French finesse and its sheer indolence-encouraging beauty, do make it an ideal getaway for the newly-wed. But the sense of impending doom that the Air Mauritius flight from Delhi had instilled in me—sandwiched as I was between three sets of honeymooners—was fast vanishing. We had already quad-biked through a section of the reserve, spotting zebras and ostriches along the way. Now, I was being photographed with a lion, while composing smug Facebook captions in my head. And this was just our first day.

Up next, some relatively quiet sightseeing in Chamarel, which translates to “coloured soil" in Mauritian Creole, the French-based Creole that is the lingua franca of Mauritius. A hillock of seven-coloured soil of volcanic origin, it is a potent metaphor for the “rainbow" nation where Hindus and Muslims of Indian origin and the French, African and Chinese coexist in a unique fashion. Almost 60% of the population is of Indian origin, descendants of indentured labourers who started arriving in the 1850s to work on sugar-cane plantations owned by the French and English.

Going out of our way, we visit the Aapravasi Ghat near the capital city of Port Louis, a historical immigration port declared a Unesco world heritage site in 2006. The island’s other world heritage site is Le Morne mountain, which was used as a shelter by runaway African slaves through the 18th century, when slavery was still prevalent on the island.

One would think that 150 years in a country with a population less than 1.2 million would prompt ethnic intermingling. But not only is intermarriage among different ethnic groups still taboo, Mauritians continue to abide by Hindu caste distinctions. Ganga Talao, a namesake of the Ganga, is crowded at all times. In the local markets, one overhears snatches of Bhojpuri and Tamil. Curries and tikkas—often bearing no resemblance to what we in India know as curries and tikkas—are ubiquitous on restaurant menus.

The country is strictly striated across ethno-class boundaries. The service sector, for instance, seems to be the prerogative of the large population of Indian origin. The Franco-Mauritians and the small Chinese population (less than 3%) control all the businesses. This is a point of departure for local politics: The general election is held while we are there, and we are amused to learn that the leading political coalitions—L’Alliance de l’Avenir and L’Alliance du Coeur—are divided along conservative Hindu and secular lines.

But even that isn’t enough of an indication of how much of a mini-India this rum-drinking, French-speaking island nation is.

One day, we take a steamboat to Ile aux Cerf, a beautiful lagoon-rich island 20 minutes from the mainland. The attendant who comes up to charge us for the sunbeds is Dev Anand, named after the Hindi film hero. On learning that we are Indians from India (Mauritius has a huge influx of South African tourists who’re often of Indian origin), Anand gives us a little discount. Like the many other Mauritians of Indian origin, he has never been to India and probably never will. But he watches every new Bollywood release and can rattle off the names of every Miss India over the last 10 years. To him, India is the hypothetical motherland.

All this makes Mauritius a holiday richly mired in history, social dynamics and yes, culinary fusion. While we are surrounded by Creole boatsmen and Indian vendors during the day, our evenings are sunk in gastronomic concoctions of strawberry gazpacho, lobster bisques and the high-nosed Sot-l’y-laisse, a dish made with chicken “oysters" (the juicy nugget on top of the bird’s thigh). In French, the dish literally means “only the fool would throw", referring to the rest of the world, which junks this portion.

We also have an exotic signature dish peculiar to Mauritius called the palm-heart salad, made with shavings of the palm heart found in six- to eight-year-old trees. Each tree yields three salads, but the dish loses its appeal when I learn later that the entire tree has to be hacked to extract this culinary gem.

There isn’t much one can carry back from Mauritius other than bottles of spiced agricultural rum, a souvenir of the island’s sprawling sugar-cane fields. I do bring back saffron, vanilla and herbed sea salts. Now, I often stare at the bottles on my kitchen shelf, hoping they will help me recreate the wonderful week again. At least on my dinner plate.

Very young children will not be able to participate in water sports and safari adventures. On the flip side, most high-end resorts have all-day childcare.

The writer visited Mauritius on a familiarization trip organized by the Mauritius Tourism Promotion Authority for journalists from across the globe.