Faces in the dark

Faces in the dark

On the evening before the inauguration of her exhibition on 17 February, photographer and film-maker Natasha de Betak is a livewire, constantly moving between spaces, exchanging hellos and hugs among visiting friends, munching on a kathi roll, stepping out for a smoke and keeping an eye out for last-minute glitches in what seems to be a well-orchestrated show. 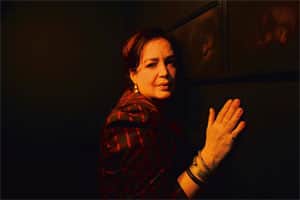 Later, facing the screen on which a series of her photographs is being projected, she lies down flat on the bare floor (“a little dusty, but…") and eggs one to do the same. The idea, she says, is to feel. “Look at this," she points to a frame from her series, Impulse. In keeping with the series, the photograph is compelling in its abstraction, a dark visualization of the photographer’s mind. “Can you see those faces? Those are spirits," she says. I believe in the kind of motion-blurred ingenuity that extreme low-light, hand-held photography often conjures. The photographer, though, believes in spirits.

But in her first solo exhibition in India, where she has worked for 15 years, de Betak is understandably reluctant to detail technique; it’s more about the photographs’ emotional core. Impulse, shot consistently in light-deficient conditions, is a state of mind—a photographic rendering of human delirium, where objects lose their contours only to gain newer, surrealistic identities. Overhanging branches of trees here can seem like stricken hands suspended in the air, intertwined vines could be the wet strands of a girl’s hair, a lady in a meditative pose gains spectral contours, and there are frames which even seem like indeterminate portrayal of television doomsday grabs.

While at one level Impulse has an avant-garde cinematic rawness—de Betak claims inspiration from Russian cinema legend Andrei Tarkovsky, her documentary film work has made it to the Sundance Film Festival, Amsterdam’s International Documentary Film Festival and Paris Film Festival, and she has made documentaries on film-makers like Pedro Almodóvar—the photography is unbridled and aspiring, despite the needless obfuscation of a few, of the creative licence exploited by a watercolourist. In Impulse, she uses the camera and the post-production stage to hypnotic effect, freeing the camera from its conventional attachments in return—here, apparitions too can be shot and the lens can craft fiction. It is like looking into a well, says photographer Dayanita Singh who was present at the exhibition’s opening: “You can go really deep."

Nightshade, the other series at the exhibition curated thoughtfully by Aveek Sen, which also lends itself to the title of the exhibition, is less experimental but scores higher on the aesthetic and compassionate scales. She is a very one-to-one person, de Betak says leaning forward, kathi roll breath and perfume in the air. Not for her the short cut of the telephoto, de Betak prefers the macro lens, the shooter and the shot close enough to touch, barter breaths.

In Nightshade, she “steals a moment" from sleeping people, a private act that millions in India are compelled to carry out in public. Nightshade, though, is not about romanticizing or documenting the plight of the homeless. Instead, she catches people at their sublime best—children, sadhus, women, vagrants, migrants, travellers, drug pushers, all found in moments of supreme static having overcome their daytime rigours for hours of serenity. The photographer makes a wonderful blend of light and colour tones and the macro lens creates a delightful indistinctness to background details: as if to lay emphasis on that “in-between moment between life and death". The result is dreamlike.

Nightshade is on till 31 March at Experimenter, 2/1, Hindusthan Road, Gariahat, Kolkata.