Where do crime writers get their crimes from? Although it is safe to assume that Agatha Christie never really bumped off Roger Ackroyd, there are writers whose lives have been marked by actual crime. Perhaps the most interesting case is James Ellroy’s, the hardest-boiled crime writer alive.

Ellroy was born in 1948, grew up in Los Angeles, “the film noir epicentre during the film noir era". His folks split when he was 7. Dad purportedly bedded the movie-star pin-up Rita Hayworth; mom drank bourbon highballs, dated men who all seemed like film noir psychopaths and sent the kid to church while she nursed hangovers. “I hated her and lusted for her," he writes. 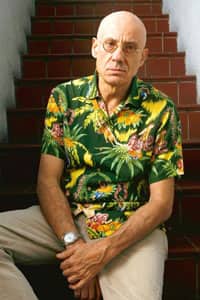 Four years later, the case was filed away as unsolved. Dad died, leaving the teenager orphaned. Last deathbed words of wisdom: “Try to pick up every waitress who serves you."

No wonder our acne-afflicted hero had a mental breakdown, stalked women and stole their underpants, burgled medicine cabinets in their houses to get high, and, in a grotesque case of transmogrification, got obsessed with another unsolved LA murder, the “Black Dahlia", about a wannabe actress who’d been tortured, mutilated and cut in half. “She was my invitation to mourn once-removed and my beckoning to all-time obsession," writes Ellroy. He visited the Dahlia dump site and “majored in crime and minored in vivisected women".

These two sex-murders combined became the central myth in his writing career: featuring in Clandestine (1982) and The Black Dahlia (1987)—made into a major film by Brian de Palma in 2006. In Ellroy’s novel, the unsolved is solved. “I saved her from a life of promiscuity. I tracked down her killer and executed him." And it may have ended there.

But then he agreed, against the advice of his agent—“it will dredge up a lot that I don’t think you want to confront"—to write a non-fiction piece for Gentlemen’s Quarterly called “My Mother’s Killer". He hired an ex-homicide cop to reinvestigate his mother’s last night. But almost 40 years later, the nightclubs she frequented weren’t there any longer and it was hardly surprising that the 15-month investigation didn’t solve the murder.

Instead, it unravelled something in him. Expanding the failure into the memoir My Dark Places (1996), he created the essential read for anybody aspiring to understand crime fiction, the most ruthless narrative of the tormented writer picking at the scabs on his wounded psyche. “I wanted to write a book and give my mother to the world."

It took him seven months to put together this final “negotiation" with the dead. “The woman refused to grant me a reprieve. Her grounds were simple: My death gave you a voice, and I need you to recognize me past your exploitation of it." There are three layers here—the existential angst of the orphaned teenager; the guilt of the grown-up who mines his mother’s tragedy for literary material; and the sincere hope that some reader somewhere will feel guilty enough to step forward and…confess.

There have been academic discussions suggesting that the slaying of his mother made Ellroy determined to, albeit fictitiously, perpetuate all forms of brutality on women: a feeling of betrayal which turned into extreme misogyny. There is less discourse around his fixation with male reproductive organs, but a close reading of his novels would show plenty of men hung like donkeys or like a cashew.

In the end, no matter what strange conclusions we may draw from his autobiography, Ellroy’s success must be attributed to his punishing schedule: He gets up early, spends 10 hours writing every day, and his elaborate plot outlines are said to be about as long—if not longer—than his novels. In that sense, one might say that this writer certainly isn’t a cashew.

Zac O’Yeah is a Bangalore-based Swedish author of crime novels.