A duet that dazzles

A duet that dazzles

The streaming notes of the accordion marry staccato lyrics, coming together in a manner that makes Dil to bachcha hai ji (My heart is a child) from the soundtrack of the forthcoming film Ishqiya almost organic—a song born, not composed. 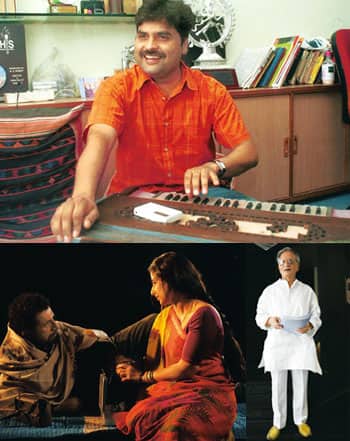 Partners: Bhardwaj (above) sees Gulzar (far right) as a mentor; and a still from Ishqiya. Girish Srivastva/Hindustan Times

Gulzar started his career as a lyricist in 1963 with Bimal Roy’s Bandini. He already had a 33-year career behind him when he first asked Bhardwaj to compose for a film. Since then, he has lent his poetry to several of Bhardwaj’s scores. In the course of the partnership, Gulzar has often surpassed himself, trading his Urdu-specked verse for rustic folk lingo in songs such as Beedi and Namak (Omkara, 2006) and for the entirely and refreshingly unexpected in Dhan te nan (Kaminey, 2009).

A few months ago, when Gulzar was felicitated with the lifetime achievement award at the 11th Osian’s Cinefan Film Festival, he gave his protégé a most precious gift. He called him an extension of himself. “He is doing whatever I have left unfinished," Gulzar announced to audiences who were perhaps pondering what tied the 73-year-old to the 49-year-old, one born in pre-Partition Pakistan and the other in Uttar Pradesh’s Bijnor district.

Bhardwaj, born to poet-lyricist Ram Bhardwaj, had idolized Gulzar even in his teens, when he harboured dreams of playing professional cricket rather than a career in music. Later, as an aspiring musician frustrated with his role as an artist management executive, Bhardwaj used to set to music Gulzar’s poems in his free time.

Their first meeting, a little more than 20 years ago, didn’t come about by happenstance. Bhardwaj had orchestrated it. One evening, circa 1989, Bhardwaj was overseeing the production of a couple of Doordarshan soundtracks in a Delhi studio. On learning that Gulzar was to come to the same studio for a recording, he stayed back hours after he was finished. But things didn’t go according to plan. Gulzar lost his way and phoned the studio for directions. “I happened to answer his call and went to pick him up at a mithai (sweets) shop that he was waiting in," recalls Bhardwaj.

The meeting was a turning point for Bhardwaj. He had been struggling, playing the harmonium for little-known ghazal singers, trying his hand at the executive job. But in that short window of time in the mithai shop, when the 20-something Bhardwaj told Gulzar he wanted to work with him, his life changed. Gulzar was gracious enough to consider the novice’s request. He asked him to look him up if he came to Mumbai. The duo first worked together on a Doordarshan serial called Dane Anar Ke (on the song Kissa hai, kahani hai, paheli hai). That led to other television anthems for serials such as Jungle Book (Chaddi pehenke phool khila hai) and Alice in Wonderland (Tup tup topi topi).

Chaddi actually forged their bond. When Gulzar had penned the lyrics for Chaddi for the National Film Development Corporation (NFDC)’s children’s serial, everyone had reservations. But Gulzar believed there was no better way to describe Jungle Book’s Mowgli, who was after all found among flora wearing nothing but a chaddi (briefs). “The folks at NFDC thought it was vulgar," said Gulzar. But Bhardwaj had joined in the protest to let it stay, and at Jaya Bachchan’s prompting, the NFDC authorities finally relented, making Chaddi pehenke phool khila hai a household anthem in the early 1990s.

For Bhardwaj, Gulzar is a mentor, lucky mascot, work partner and friend, all rolled into one. Bhardwaj equates him to the father he lost right before they met. They take up each other’s causes. Last month, Bhardwaj and his wife Rekha joined Gulzar on a march in Old Delhi to commemorate Ghalib. Gulzar has penned the words for both Bhardwaj and Rekha’s non-film albums, Boodhe Pahadon Par and Ishqa Ishqa.

Rekha, a trained classical singer, calls Gulzar her sufi saint. “He showed us the path. I really don’t know where we’d be without him today, both in the music industry and outside of it." Rekha has sung two Gulzar-Bhardwaj compositions for Ishqiya—the ghazal-based Ab mujhe koi and a semi-classical song based on raga Lalit, Badi dheere jali.

Abhishek Chaubey, the director of Ishqiya, has worked with both Bhardwaj and Gulzar from the start of his career. “I’m ecstatic that I have two such greats collaborating for my debut effort," he says, equating Gulzar and Bhardwaj’s partnership with the likes of the legendary Sahir Ludhianvi and S.D. Burman. That harmony had ended bitterly, over issues of fame. This one, as the second line of Dil to bachcha hai ji goes, Daant se reshmi dor kat ti nahi, is hopefully like a silken thread that would be difficult to cut.

Ishqiya releases in theatres on Friday.