I would have to say that the most romantic story is my own. I was brought up in Mumbai, studied in a convent school and had led a sheltered life growing up in a joint family. I started singing in 1969, and after an assignment each in Chennai and Mumbai, I got my third at a nightclub called Trincas on Park Street in Kolkata. 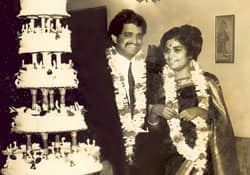 In tune: One of the first promises Jani made to Usha was that he wouldn’t get rid of his moustache.

I started with Fever, finished a couple of jazz standards, moved on to Hello Dollyand Rain; all in all, it was a good set. In those days, one needed a licence to sing. You had to sign a document in which one clause was that singers could not solicit or even sit at the tables in the nightclub. So after the show, I was in the anteroom when a dashing man walked in. When I passed by him, he said, “Actually, you were super tonight." That was it. I turned weak-kneed and bleary-eyed, especially when he asked, “Would you sing Matilda for me?" I told him to come the next time I was singing and when I rehearsed next, Matilda was at the top of the list.

When I went on the floor the next time, I said, “The next song is dedicated to the person who thought I was super that night." Everyone loved the song and it was the first time I did my trademark act and got the audience involved. After the show, I waited for him to show up. He did not, and I was miserable and heartbroken for the next three days.

A few days later, I was in the anteroom again and he walked in suddenly, without a moustache. My first reaction was to ask him what he did to the moustache, and then I demanded to know where he had been. “I sang Matilda for you on Saturday as I had promised," I said. I think that was too much for him to digest; he couldn’t believe someone could feel so much for him after one meeting. But he did promise that he wouldn’t get rid of his moustache again.

He then started coming regularly and would send me these notes with lovely requests, such as Scott McKenzie’s San Francisco and Satisfaction by the Stones. I wonder why he has stopped sending me those now. When no one was left at the restaurant, I would sit at his table and we would talk. That was when I got to know his name—Jani Uthup. When I asked him the name of the company he worked with and said I had never heard of it, he only said, “We don’t advertise." I thought then, “God what a stylish man he is."

It had never struck me to ask him his faith. I later learned he was Christian—I was a Brahmin Hindu. I once asked him, “How will we bring up our children?" I meant which faith would they follow. He just said, “We’ll bring them up like children."

I remember he took a loan from me to buy my engagement and wedding rings. He did pay me back though.

Our entire romance was so torrid. Meeting someone at a nightclub was unthinkable in those days. But I took it for granted that we would be married. That was the only scandal I had and I married it.

My favourite family love story is ironically my parents’. They met at Mumbai’s St Xavier’s College because they both had a common link—a love for theatre. My father Alyque Padamsee fell in love with my mother, Pearl, but before he could make a move, she left for Australia to study archaeology. 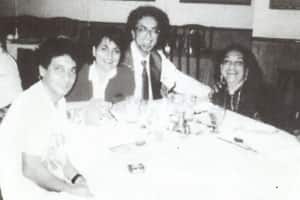 By that time, my mother was back in India, married and in Delhi. When dad returned and learned of this, he was totally heartbroken. But they met again six years later; she had moved to Mumbai with her two children after separating from her husband. While in college, they had set up “The Theatre Group", which had a bunch of close-knit people. Pearl was working with Adi Marzban at that time and that’s how she and dad met again. This time around, they managed to get together after being like two ships that keep passing each other in the dark.

But the struggle wasn’t over. My father was almost disowned for marrying her, because marrying a divorcee with two children was “frowned upon". But they both worked against the odds and were married for 15 years.

My favourite story is about the time dad summoned up the courage to ask her out to a movie while they were in college. He was quite shy then, so he had to pluck up the courage to do this. Pearl agreed, and asked him to buy three tickets. Dad wondered why, and when they met that day, there was this large English girl that mum had brought along. Dad was quite dejected, because she sat between him and mum through the whole movie.

What I remember most about their relationship was that they were best friends. They shared so much history and both had a wacky sense of humour. When my mother was house-bound for the last two years of her life because of an illness, dad would come over almost every day and they would joke and laugh with each other.

I have always been a great romantic. I remember going to Fatehpur Sikri when I was 16 and tying a dhaga (thread) on Salim Chishti’s Dargah while wishing for a good husband who would love me.

We were shooting the war scenes for Junoon with a regiment in Jaipur in 1978. My to-be brother-in-law happened to be the commanding officer of the regiment, and I made friends with the officers and their wives. A little while later, I attended a horse show and a polo match in Kolkata and the regimental officers and their wives happened to be there. And so was Pickles Sodhi, who very conveniently got himself introduced to me, with a little help from my sister-in-law, who tried to set us up. 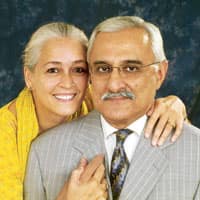 Playing the field: Nafisa and Pickles went to a movie with 10 other friends for their first date.

I was the one who proposed to him. We were having dinner at The Oberoi in Kolkata. I sent a request to the crooners in the restaurant and soon, between songs, they announced, “Congratulations to Pickles and Nafisa on their engagement." Pickles was stunned. “What!" he said. I casually told him, “Let’s get serious." He was 14 years older than I was and it was about time he got married anyway.

The moment I set eyes on him I knew he was a good human being. He has that old world charm; he still stands up when I walk into a room. I think it’s an advantage to marry someone who has seen life. His mother and my father were both apprehensive when we got married, but we’ve fitted in very well with each other’s families. I had only two conditions: that I would not cook, and that he should make me a bolster, because I’ve always had one when I went to sleep. The one we got was 6ft long, so we had it halved— after 28 years, we both still use one half each. My grandmother, Allanmai Damri, was the daughter of the diwan of Gondal, which was part of princely India. She was a little under 5ft tall, and had been home schooled. My grandfather, Hormazdji Spencer, was a lawyer who had been brought up in Mumbai in the time of the British Raj; he had studied at Wilson College. Their marriage was arranged by his brother and her parents, at the time of the freedom movement. They were two differently raised people from the same community, living in what was a very exciting time for the nation.

After they were married, they lived on Laburnum Road, in a house next to Mani Bhavan, which is close to the Gowalia Tank Maidan, now the August Kranti Maidan, which was the site of many rallies.

My grandmother got involved in the freedom movement and often gave protection to any freedom fighters who came seeking refuge to escape the lathi charges. The day the Quit India Movement was announced, there was a huge rally, after which there were repercussions. That evening, Allanmai sheltered everyone in her huge kitchen. Through all this, my grandfather, who was one of the public prosecutors of Mumbai and worked for the establishment, didn’t once try to stop her. He probably did not approve; it was very dangerous for him and he could have lost his job, but he turned a blind eye. I don’t think she really knew what she was doing, it was just out of the kindness of her heart that she gave those people refuge. And maybe he knew that.

She passed on one valuable piece of advice to my mother— never go to sleep with a fight on your hands. My mother lived by that and has passed that on to me, and it’s an enduring part of my own relationship with my husband Jamshyd. I think it’s a message that’s valid for any generation. What made it even more so was the way he proposed to her. He’s a superb violinist who has studied at the Juilliard School of Music. While she was out one day, he sprinkled the whole floor of one room in the apartment with white feathers and flowers and lit white candles everywhere. When she walked in, he played her a beautiful piece on the violin, got down on one knee and proposed. With a diamond, of course. He had hired a private chef to prepare a multi-course meal with decadent foods such as oysters, caviar and lobster.

They also had a very private ceremony only for close family and friends at a beach resort in Phuket. It was a Buddhist wedding, all of us were wearing white and there were these white-clad monks chanting all through the ceremony. That was very beautiful.

Gitu and David have two children now. I have never asked her what exactly they talked about that day in the elevator.