The international auction house Sotheby’s has just announced the sale of an important group of works by the celebrated Bengali artist and poet, Rabindranath Tagore, in its annual sale of Indian Art in London on 15 June. The auction announcement comes close on the heels of Tagore’s 150 birth anniversary that was celebrated earlier this month in India. Parul Dave-Mukherji, professor at the School of the Arts and Aesthetics at Jawaharlal Nehru University in New Delhi, says she is not surprised at the timing of the auction. “This is a trend one can observe over the years of selling bankable works by Modern artists—who’re safe bets—when a topical peg arises," she says.

Tagore was the first non-European to win the Nobel Prize in literature. As a poet, novelist, musician and playwright, he reshaped Bengali literature and music in the late 19th and early 20th centuries. This group of 12 paintings are from the Dartington Hall Trust, a charitable organization based in South Devon in the UK. The trust was founded in 1925 by the couple Leonard and Dorothy Elmhirst. Leonard became a close friend of Tagore after the pair met in the US, while Leonard was attending Cornell University. After graduating from Cornell in 1921, Leonard even travelled to India to work as Tagore’s private secretary.

An official release from Sotheby’s states that it is not clear exactly when these paintings arrived at Dartington, but that it is probable that they were a gift from Tagore to Leonard. The proceeds from the sale of these paintings will be an integral part of the charity’s ambitious expansion plans.

Tagore started painting relatively late in his life, but this did not prevent him from becoming one of India’s most esteemed Modern artists. Sotheby’s has a track record of selling works by Tagore. In May 2008, the auction house set a record for the highest sale price of a Tagore work by realizing £120,000 for a painting called Death Scene (from the collection of W.G. and M. Archer). 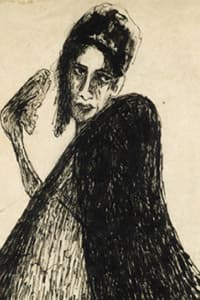 This, according to Dave-Mukherji, has to do with the fact that the largest Tagore collection still rests at the permanent collection at Santiniketan, the university that Tagore established in West Bengal. “There are very few artworks by him that are up for sale at any point," she says.

Estimated sale prices in this auction are modestly tagged under £40,000. According to Holly Brackenbury, deputy director of Indian Art at Sotheby’s, this group of paintings together form a stand-out group. “(They) all have impeccable provenance having been in the collection at Dartington Hall for most of their life. Given this exemplary history, and also Tagore’s status as one of India’s heritage artists, the sale of these paintings really does present collectors with an exceptionally rare, once-in-a-generation acquisition opportunity," she says.

The auction lot includes an Untitled painting that is typical of Tagore’s imagery—a portrait of a woman undertaken in watercolour, coloured ink and pastel, estimated at £25,000-30,000. None of the artworks have appeared in the open market before, making their auction debut a notable event.