Browse through Sandeep Biswas’ photographs and you’ll be left wondering where they were shot. Silhouettes stand out against an expansive sky; water reflects the outline of a building; a curved staircase enters and exits the frame—his works deliberately obscure the world. 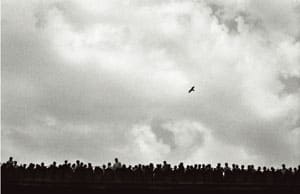 It came as no surprise that when approached to explore the idea of freedom in modern India through photography, Biswas, 37, began at a private place. As a child in Delhi, he celebrated Independence Day by waving the flag—with pride, but without knowing “what you’re proud of". Nowadays, though, he uses the day to reflect on whether he can be proud of his own self. “It reminds me that I have a responsibility to keep my work constructive. Every act automatically affects the world." But Biswas says, “What worries me about most people is that they accept the fact that they are programmed, culturally and socially. Everybody’s brought up in some kind of structured society. And nobody wants to think outside of that." People, then, fail to try anything different or risky because of self-imposed cages. The status quo is a convenient, safe place, but one Biswas has tried hard to avoid.

To replicate his idea of freedom, Das headed to old Delhi. He reiterates that the location doesn’t matter; but he’s comfortable with the area since he’s working on his next big photography series there.

Once in the midst of the chaos, he wandered until he found people physically trapped within structured spaces and juxtaposed them with a wide, open sky. The result is a stark image of a bird caught in flight. The silhouettes of people barely protrude into the image, and blur beneath the sky.

The black and white images exhort people to create their own space.

Some of Biswas’ prints at his south Delhi studio

Delhi-based photographer Sandeep Biswas is currently at work on his next series, ‘Urban Chaos’.