Astérix and the existential crisis

Astrix and the existential crisis

On 29 October 1959, a comic series called Astérix le Gaulois made its debut in Pilote, a French cartoon magazine.

Written by humorist and comic-book writer René Goscinny and illustrated by artist Albert Uderzo, the series was an oddball tale about a village of “indomitable Gauls" resisting Roman invasion in 50 BC, thanks to a druid who brewed a special magic potion that granted them superhuman strength. Quickly distinguishing itself through its sharp, playful script and sharper art style, Astérix would turn, in less than a decade, from a little side project to Goscinny and Uderzo’s sole focus. 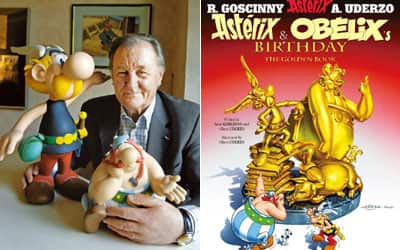 Astérix belongs to the Franco-Belgian comic milieu, the same tradition responsible for Hergé’s Tintin and other titles such as the plucky cowboy series Lucky Luke. Its worldwide popularity is partly due to a stellar English translation by Anthea Bell and Derek Hockridge. The tongue-in-cheek playfulness of the original is kept largely intact, and Bell and Hockridge even improve on the French original in some respects (the village fishmonger, rather oddly named Ordralfabétix (“alphabetical order") in French is “Unhygienix" in the UK edition).

But in becoming one of France’s most recognizable cultural exports, Astérixhas had to face its own existential crisis. The lucrative aura of its franchise stands at odds with the paucity of its underdog message. Uderzo, now 82, wishes the series to continue. Last year he sold the publishing rights to produce new Astérix adventures after his death. It’s a divisive decision that many say betrays the spirit of the comics. “It’s as if the gates of the Gaulish village had been thrown open to the Roman Empire," wrote Uderzo’s daughter Sylvie in a column for French newspaper Le Monde. “I am entering resistance against perhaps the worst enemies of Astérix, the men of finance and industry."

But with every new generation being introduced to Astérix adventures, its readership expands. Uderzo defends his decision, saying it will save Astérix from being consigned to history. In recent interviews, he said, “When no more adventures are added to a series, little by little, it dies."

A taste of ‘dahi bhalla’

In March 2008, when artist and translator Harish M. Sudan was in Raipur, Chhattisgarh, to receive an award from comic magazine CarToon Watch, he found a sizeable group of Astérix fans, among them a serving IAS officer, who wished to meet him.

They’d grown up reading Sudan’s Hindi translations of the books, published between 1980 and 1986, and the tale of the indomitable Gauls had stayed with them till adulthood. “They wanted to thank me, and talk to me about the books," says Sudan. 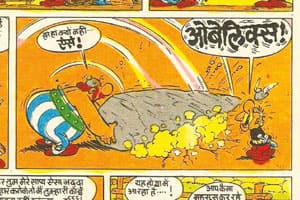 Gauls in India: Sudan’s skill as a calligrapher shows in translation

In Asterix aur Cleopatra, for example, the queen’s former food taster celebrates his new found freedom by running away to eat dahi bhalla. The Romans speak with a slight Punjabi twang and greet each other with namastara. Druid Getafix is Vaidyanathix, bard Cacofonix, Besurix, and chief Vitalstatistix, Motumilix.

Astérix’s Indian sojourn began in 1972, when Delhi-based publisher Gowarsons brought out a comics magazine called Madhu Muskan, which enjoyed a brief spurt of popularity in the late 1970s, touching, at one point, up to 100,000 copies a week. “They then started an imprint called Madhu Muskan Comics, which used to publish stand-alone comic-book versions of popular characters from the magazine," says Alok Sharma, a comic-book artist and film-maker who’s directing a documentary on the evolution of Indian comic books.

It was this imprint that brought the rights to Astérix, which it published as Gowarson Comics. “They ran a large promotional campaign, including posters in railway stations, and the print quality of these comics was far better than others in that era," says Sharma. A total of six titles were published, starting with Asterix Olympic Mein (Asterix at the Olympic Games).

But while it had quality in plenty, popularity it did not. “It received a very muted response," says Sharma.

“Astérix came to India before its time," says Sudan.“I don’t think the audience then was ready for that kind of humour. But now, the audience is ready. It would have done well now."