What is this?" young passers-by on Chapel Road in Bandra, Mumbai, have been asking the artists of the Bollywood Art Project as they have encountered them over the last fortnight. “Mughal-e-Azam?"

The Bollywood Art Project, or BAP (fittingly pronounced “baap", Hindi for father), a collective with an ambitious plan to pay tribute to Indian cinema in its 100th year, spent April creating a roof-to-base painting of the poster of the 1953 film Anarkali, on the side of a Chapel Road cottage. The older residents of the community don’t make the elementary mistake of confusing the film with its more famous successor. “That’s Bina Rai and Pradeep Kumar, isn’t it?" they say. “I remember this." 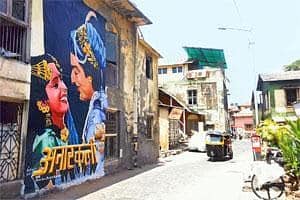 “This city doesn’t reflect the way Bollywood has survived and thrived here for a century," explains Tony Peters, producer, Orphanage Films and Design, and one of BAP’s founders. “We wanted to bring that heritage out into the street and celebrate it."

Peters and his friend, Ranjit Dahiya, looked around the Bandra community where they lived, and decided to start their celebration locally. On Chapel Road, a magnet for graffitistas and wall artists, their Anarkali is in good company. Across the small, cobbled lane lined with roofed cottages, on the opposite wall, is an eye-popping young girl throwing up a peace sign, a work by renowned Japanese graffiti artist Shiro. Under the imprimatur of The Wall Project, artist Dhanya Pilo’s effort to bring art to public spaces in Mumbai, dozens of mural painters have left works of high quality on the sides of houses and shops in this lane and the adjoining Bazaar Road since 2007.

Anarkali stands out even from this minor hoard of treasures for the scale of its ambition, and its seriousness of purpose. Dahiya, a National Institute of Design-trained artist, loves the aesthetic of Hindi cinema: He painted 31 Bollywood posters for an exhibition that showed in France and South Africa over 2010 and 2011. Having convinced residents to give BAP a chance and picked the wall of a sun-bleached cottage that once housed a primary school, he propped up a ladder one evening in April, and got to work.

The interest and admiration from Chapel Road’s passers-by, especially those who take cinema as seriously as the artists, heartened BAP. “People stopped to tell us about their memories of Pradeep Kumar, or remembered a song from the film," says Mallika Chabba, an artist with BAP. “There’s so much emotion associated with these movies for Indians."

“It’s great that the community came to be part of it," says Sruti Visweswaran, a video artist and researcher for BAP, currently working on a stop-motion video about the creation of the Anarkali painting. “We chose Anarkali because this was really Mughal-e-Azam’s predecessor in terms of scale and aesthetic. It set a new standard for films in that era." Visweswaran and the team are finalizing their next moves, but have already begun to collect enthusiasts to work with them across media and genres for new public projects in neighbourhoods across the city, and, they hope cautiously, the country.

“We want to celebrate the fact that our movies used to be larger than life," Peters says. “They used to be for everyone." The idea is familiar, but while “celebrating Bollywood" has too often devolved into kitsch, BAP’s Anarkali is really the opposite—a magnification of an already big idea.