Rider on the roof

That looks like a flying carpet," my cousin Rishi exclaimed, pointing to a photograph on my living room wall. Memories of that 11-hour journey from 2009 came flooding back.

It was still dark on an early March morning when the Gwalior–Sheopur Kalan passenger train trundled out of Gwalior station’s narrow-gauge platform at 6.30am. The train encircled the massive Gopachal hill, atop which Gwalior Fort sits.

Built between 1895 and 1909 by the Scindia rulers, the Gwalior Light Railway network covered the farthest reaches of their domain. The maharaja’s personal train started right from the front porch of his palace. Of the three lines on the network, only the one from Gwalior to Sheopur, 198km to the west, remains today. The other two—Gwalior to Shivpuri and to Bhind—have fallen prey to the Railways’ drive to cover the country with broad-gauge trains. The Gwalior-Sheopur line is the longest operating section of railway on the 2ft narrow gauge anywhere in the world.

Trains had fascinated me from childhood. My earliest memories were of cross-country train trips to visit my grandparents. Over the years, I travelled on all sorts of trains to the corners of the country, often preferring slow trains to faster ones, for that is the best way to learn about regions and people. I made it a point to travel on as many meter and narrow-gauge train routes before they were lost. I visited the toy trains of the hill stations and savoured their famous saloon cars and first-class cabins.

The British had built those lines to escape the harsh Indian summer. The Gwalior Light Railway was much more basic in comparison, for it was meant for the common folk. This was what had brought me to it.

My train ran parallel to National Highway 3, which connects Mumbai to Agra. Trucks, tempos and buses scampered past us. At one point, I could see the broad-gauge main line, on which trains between Agra and Jhansi clock more than 120 kmph. My train plodded on, capped by a maximum speed of 34 kmph.

The locals travel on the roof of the train.

The train looked like a floating strip of humanity. It was a photograph of this image that had inspired the comparison with a flying carpet.

Past the smoke-belching factories of Bamour Gaon, 21km from Gwalior, the seven-coach train turned west and into the Chambal heartland. Here on, I saw miles of fields or scrub forest with no industry or major city in sight.

I met Ashok Sikarwar, a schoolteacher in Gwalior on his way home to Birpur; he gave me a quick lesson in local economics. “From Bamour onwards, for 200km till the Rajasthan border, there is no industry whatsoever. Our ancestors farmed the land or went to Morena or Lashkar (the former citadel of Gwalior) for work. We continue to do the same. This seems to be the land India forgot."

The government had built an extensive network of canals to channel the Chambal’s plentiful water to the Morena plains, said Giriraj, who owned a jaggery plant in Sabalgarh, a municipality in the Morena district. “In the rocky terrain, you otherwise need to bore to depths exceeding 300ft for ground water, but now we have water all year round." Unending fields of golden wheat and sunflower shimmered around me in the morning sun. We travelled westward, from Sumaoli towards Sabalgarh.

The famous samosas at the Agarwal Nashta Corner, near Sabalgarh station.

On a subsequent trip on this route, this January, I would learn that Agarwalji had died and his son had taken over. The samosas at Sabalgarh were still as good. The issues faced by the locals had not changed. The tiny trains simply did not have the speed or capacity to meet their needs.

People were pretty vocal about their desire for the faster broad-gauge connectivity. “Only with the broad gauge will our region prosper. Right now, we waste a day just to travel 100km. What hope do we have of reaching the outside world like this?" said Ramesh Bhadauriya, a local stringer for a national Hindi daily.

I learnt that local politicians such as Narendra Singh Tomar and Prabhat Jha had promised to get the line converted to broad gauge. They had even travelled on the train. Tomar is now a Union minister and Jha a Rajya Sabha member. The line is still a narrow-gauge one.

The road and the rail parted ways after Sabalgarh. The road took a south-westerly route around the Palpur-Kuno forest to reach Sheopur. For the villages along the northern edge of the forest, the train was the only connection with the rest of the world. At places such as Shampur, Raghunathpur and Khojipura, the train brought in people, supplies and letters

This was also rough country, once the dreaded lair of many an outlaw, including Phoolan Devi and Paan Singh Tomar. The dacoits were sometimes referred to as baaghis—rebels fighting for a cause. 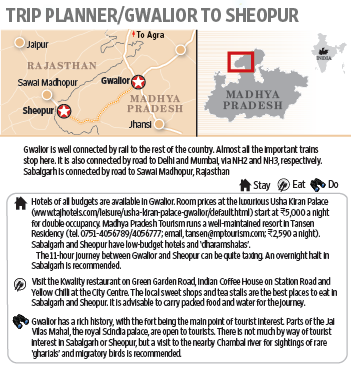 At Birpur, half the passengers on the roof got off, advising me to do so as well. A low bridge across the Kuno river lay ahead. Anyone on the roof ran the risk of hitting his head on its beams. A couple of men convinced me that it would be fine if I lay flat on the roof. As the train approached the bridge, I wasn’t so sure. My ample girth rose far above the lean frames of my co-passengers. I was fearful of being a winner of the year’s Darwin awards. The locals were right, however. Only a few inches separated my head from the steel girder above, but it was enough clearance.

At Durga Puri, the train emptied out. Some 400 people, including the roof riders, drivers and guard got off. Just off the platform was a Durga temple. The train did not proceed till everyone had paid obeisance. The scheduled halt was 2 minutes, but it was nearly 20 minutes before we proceeded.

It was well past 5pm when we approached Sheopur. I was tired, scalded and bruised. Yet this journey had been one of the most enjoyable. I wondered if my fellow passengers felt the same way.

They didn’t. A coach that was meant to seat 37 usually carried three times that number—with no fans, lights or toilets. Most locals were incredulous that I had come all the way from Delhi just to ride this train.