Home >Mint-lounge >The decline of Shahjahanabad

The decline of Shahjahanabad

The decline of Shahjahanabad

In the mid-19th century, Shahjahanabad was the civilizational heart of the Mughals. The limits of their capital were guarded by a rampart of random rubble that protected it from the surrounding wilderness. The inhabitants enjoyed and abused the advantages of music, poetry, food, women and wealth. The emperor appeared to possess sovereign authority, but devolved on the East India Company all the executive powers of government. 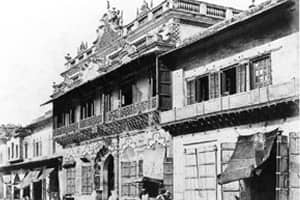 Photographs of a house in Chandni Chowk. Courtesy Penguin India

Two new books attempt to trace this. Delhi 360°: Mazhar Ali Khan’s View from the Lahore Gate minutely examines a rare panoramic painting of the Mughal capital made in 1846. Beato’s Delhi: 1857 and Beyond contains photographs of Delhi taken after the uprising. In the first book, we see a watercolour vista of towers, arches, gateways, pavilions, gardens, fountains, mosques and palaces. In the second book, that fairy-tale setting has been transformed into a sepia-stained ghost town of vandalized mansions, scarred walls and empty alleys.

One day, with the uprising still a decade away, topographical artist Mazhar Ali Khan, about whom not much is known, went to the Red Fort. He climbed to the chhatri (cupola) on the southern tower of the Lahore Gate and looked about him. What he saw, he painted. The Persian title of the 5m-long panorama translates to A Picture of the Imperial City of Shahjahanabad drawn from the Lahore Gate of the Exalted Fort. Acquired by the British Library in 1981, and now published for the first time, the painting shows, among other landmarks, the Red Fort. In response to what the British saw as the mutiny, 80% of the palace complex was destroyed. The Zinat-ul-Masjid in Daryaganj by Felice A. Beato. Courtesy Penguin India

We will never see the Red Fort as it is depicted in the panorama. There’s the Anguri Bagh (Grape Garden) running from Lahore Gate to the Yamuna, with its European-style glasshouse. There’s a lone sepoy standing on a tower. There’s the Chatta Darwaza gateway with its floral decor, since then whitewashed many times over. There are the shacks of 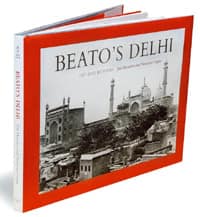 “Beato’s images are significant because they were the first examples of photography in Delhi," says Narayani Gupta, a founder-member of the Conservation Society of Delhi and co-author of the book. “Earlier, there were romanticized drawings and paintings of the capital. But here you see things as they are. These are stills of architecture connected with the mutiny, and also with the Mughals. Please note that when Beato went to the Red Fort or the Jama Masjid, he was not looking at them as monuments. Indeed, that word was first used for those buildings by the Archaeological Survey of India only in 1871," says Gupta. 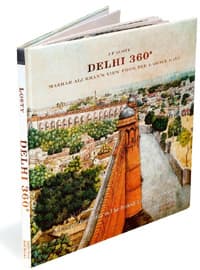 One day, climbing the northern tower of Jama Masjid, Beato “saw the whole city and country like a map below our feet". His photographic panorama of Shahjahanabad is similar to the watercolour version of Mazhar Ali Khan, in the sense that they both preserve a city that has been vanquished. Many of the landmarks in Beato’s image would soon be destroyed by the British as part of Delhi’s military reorganization.

The view of Delhi as seen from the Lahore Gate of the Red Fort. Courtesy Roli Books