Home / Mint-lounge / Features /  Anees Salim, one of India’s most affecting writers
Back
Share Via

Anees Salim, one of India’s most affecting writers

With 'The Small-Town Sea', Anees Salim has produced one of the most subtle tragedies in Indian fiction in English

The sea of the title laps at the edges of this novel, dynamic despite its sameness, essentially unknowable, yet always recognizable. It is a magnet, summoning a dying man with the same insouciance with which it beckons tourists from across the world. It is the great forbidden, out of bounds for the 13-year-old protagonist. It is the distant thunder that plugs in the gaping quiet of his narrative, the sight he is conditioned to admire from afar, the insurmountable barrier that separates him from all that he can call his own.

In perhaps its more tolerable version, the small-town sea is an allegory for life that every aspiring artist must experience, combining beauty and steadfastness with mystery and destruction. Dip your toes in it for the fish to nibble or lose a part of yourself, the sea in turn can birth a writer of such immense tragic potential that he, in turn, will leave the reader changed.

There’s no other way to put it: Anees Salim—who burst upon the Indian literary scene with little fanfare in 2012, with The Vicks Mango Tree, and followed it up with Vanity Bagh and Tales From A Vending Machine (both 2013) and the Crossword Book Award-winning The Blind Lady’s Descendants (2014)—is one of the most affecting writers working today. As prodigiously talented as he is, he is distinguished from contemporaries writing in English by his precision in identifying and then mining the deep fatalism that runs through the Indian psyche. It is this regard—not awestruck or subservient, but deep, curious and self-aware—that has produced, back to back, two of the most devastating, subtle tragedies in Indian fiction in English.

There are other commonalities between The Blind Lady’s Descendants and The Small-Town Sea, but perhaps the most significant is the easy interiority of both novels, brought on partly by the first-person narrative in an epistolary form. Both are informed by a sense of calamity just kept at bay—the nails hammered into the door to ward off bad luck, the repeated warnings to stay off the beach—yet both showcase moments of bubbling lightness and wicked humour.

It helps, of course, that the narrators of both books are young men—26 in The Blind Lady, and 13 in The Small Town—but it is not just about age or gender (in Vending Machine, the author slipped smoothly into the headspace of Hasina Mansoor, a young working girl): Salim possesses a rare instinct for the angularities that make his characters whole. He surrounds them with parents, siblings, grandparents, aunts, uncles and friends and each of them holds up a mirror to them at a slightly different slant.

Salim’s protagonists also tend to be observant loners with overactive imaginations, who do most of their living in their head—so much so that over the first few chapters, I had to work hard to shake off the disconcerting idea that The Small-Town Sea was actually an early-life account of The Blind Lady’s Amar Hamsa. Growing up in a society with stone-etched gender roles, they figure out early that their fears, anxieties, guilts and idiosyncrasies are better off kept to themselves while they fill out their designated parts for an apparent familial amity. Consequently, such action as there is in these books happens at a remove. But the emotional shifts they effect are quick and cataclysmic. 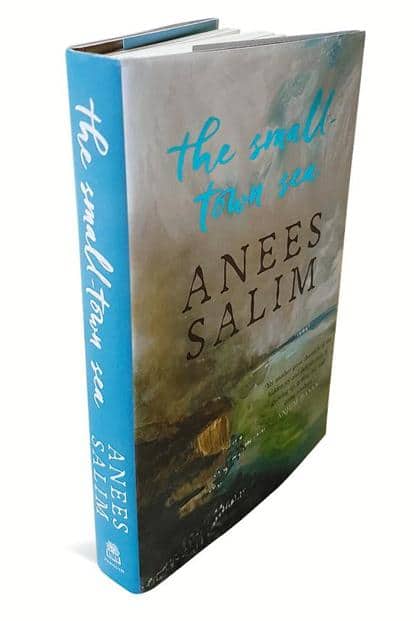 Consider the day Vappa dies. He has been dying all through the first half of The Small-Town Sea; there have been a few narrow squeaks. On the morning his death seems imminent, his son, our unnamed protagonist—a peculiarly effective device in this novel, alongside the nameless locale in a specific geography—runs away to the unused cowshed and amuses himself by ensnaring a pigeon to train later as a carrier-bird. When Vappa dies, grief and events and relocation take over. It is days later that our boy—and he is definitely a boy, not an adolescent or even a tween—remembers the pigeon on a long leash. The tension over this episode builds up as exquisitely as a violin crescendo, even as it nestles cosily within the more obvious catastrophe of a young boy losing his father.

Pegged by lightly used symbolism—a Russian television serial, a fork-tailed bird, an under-construction bridge—Salim builds up the small ordinaries: Vappa’s illness, the move from the big city to the small town, the resultant loss and dislocation in his son’s life. And then, with the natural resilience of youth, the 13-year-old begins to find his feet again. He makes a friend—the interactions with Bilal, especially the one involving a pirate ship, and, later, James, are the funny bone of the novel, if not the spine—and loses a father. He has been trained for this: In a singularly touching section where Vappa and the boy are returning from the beach, the father admonishes the son for trying to keep up with him.

“You should walk either ahead of me or behind me," he said.

“You should learn to walk alone."

As the teenage protagonist’s life unspools in a heartbreaking narrative of fragility and pain (that it never slips into the merely maudlin is an incredible achievement), it is tempting to seek refuge in metaphor and allegory. Aloneness may be a fundamental order of the human condition but no one, perhaps, needs it more than the creative artist. As the boy aims to fill his father’s writerly shoes—the novel is couched as a letter to a London literary agent, who had once rejected his submission—he will face the cruellest question of them all. The resolution is ambiguous, but allows scope for hope, at the most mundane level, for a character who has lived through too much, too soon. This is perhaps where the novel falls short of the standard of The Blind Lady, which possessed, in its final act, all the cathartic release of a Greek tragedy. The Small-Town Sea is human and that may be its failing—or its greatest triumph.