Call of Duty: Modern Warfare 3—launched earlier this month—has broken all sales records, making over $400 million (Rs 2,108 crore) worldwide in the first 24 hours after its launch. The previous game in the series made publisher Activision richer by $2 billion last year, and analysts are predicting that this game will be a lot more successful. 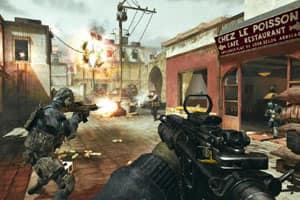 A still from Call of Duty: Modern Warfare 3

As per PricewaterhouseCoopers’ “India Entertainment and Media Outlook 2011" research, the gaming market in India is already at ₹ 830 crore, and growing at 25%—this is the sale of software alone and does not take into account the sales of consoles and peripherals.

PwC executive director and leader, entertainment and media, Timmy Kandhari, says, “The online market is the fastest growing segment in gaming today, with an annual growth rate of 59.7%."

Online multiplayer pits humans against other humans instead of artificial intelligence (AI) driven opponents. The results are unpredictable, and there is a strong social element built into it as well—most people return to the same servers at the same time regularly, and so a community builds around these games. Games like Modern Warfare 3 have built-in chat features so you talk to the other players—to discuss tactics, and chat a little. It’s not uncommon to form real-world friendships based on in-game interactions.

Since many of the game modes involve teams, people form groups that play together as a team, which can also take part in tournaments, online and offline. India is also participating in the World Cyber Games (WCG) in Korea this year for the third year running—the WCG held trial tournaments for Indian teams to select players for the games that will take place in December.

Younger gamers, those still in school or college, dominate the multiplayer community, both in India and elsewhere. Today though, a large number of older gamers are also connecting online.

Nitin Maheshwari, 27, works for ITC in Mumbai and has been playing video games for most of his life. He says: “I used to go for tournaments earlier, before I started working, but now I don’t have the time for that any more. But I still play games online—I bought Gears of War in September, and I’ve been playing online almost every night for an hour or two. I have some friends from college, who are now in other cities too, and we try and plan it so we are online at the same time and can play together."

Suresh Balakrishnan, 20, is a final-year student at Delhi University. His parents realized they could turn his interest into multiplayer gaming into a reward system for getting good marks—as long as his progress meets expectations, his parents keep renewing the Xbox account. He says: “My friends and I downloaded Modern Warfare 3 together for our laptops, and we’ve been having LAN parties every day for 3-4 hours. That way we don’t need to all have Xbox Live accounts, but online play is better because right now we have only four players. Online, you can have much bigger teams." LAN party: Gamers gather for a tournament in Delhi

The launch of new games, such as Modern Warfare 3, is a big reason for this. New releases focus on multiplayer, and this is increasing the numbers for services like Xbox Live and PSN directly.

Mor confirmed this, saying: “Three recent games, Gears of War 3, FIFA 2012 and now Modern Warfare 3, all lead to huge spikes in online gaming on our network. With all three, the spike took place from Day 1—people ignored single player entirely."