Thanks for Visiting Mint
You seem to have an Ad Blocker on. Please turn it off in order to continue, or whitelist Mint
HOW TO TURN OFF AD BLOCKER
OR
REFRESH IF YOU ALREADY TURNED OFF THE AD BLOCKER
Home >Mint-lounge >Features >Review: Lenovo Vibe K5, a new truly affordable phone after a long wait

Lenovo's new smartphone is a solid option for buyers looking for a budget smartphone, but is far from an all-round device In the last six months, the smartphone space has seen maximum excitement in the price band between ₹ 10,000 and ₹ 20,000. That has left the sub- ₹ 10,000 price band a bit neglected. Phones such as the Xiaomi Redmi 2 Prime, Moto E 2nd gen and Coolpad Note 3 Lite have not been really challenged by a newer smartphone for a while now. But that about to change. Priced at ₹ 6,999, Lenovo’s new Vibe K5 is the first device in many months to take on these established low-cost smartphones. But is it any good? The phone’s key design attribute is the compact and solid form-factor. At 8mm, it is slightly thinner than its rivals. To ensure the sharp edges do not tingle while you are holding it, Lenovo has added a slight arch around the back. It is barely noticeable but feels good in the hand. The phone weighs 142g, which is neither too light nor heavy. The back panel is covered by a plastic cover beefed by a dash of metal in the middle. The matte layer on the outside keeps the phone free from smudges.

In comparison, the Coolpad Note 3 Lite has an all-plastic exterior and is a little more rounded at the back. This gives it a slightly thinner look than the 8.9mm profile. It also weighs 142g and fits as comfortably in the palm as the Vibe K5. Both look nice, but what really gives the Coolpad Note 3 an edge is the back-facing finger print sensor which works quite accurately.

The phone’s 5-inch display is perfect for a casual or first-time smartphone user. It packs in a healthy screen resolution of 1280x720p which is what all small screen phones at this price point have. This is a bright looking display with a slightly warm tint to it. Watching movies is quite enjoyable. The display has some fine-tuning options for more effect, allowing the user to switch between the comfortable mode which gives the screen a creamish tint and the default whitish mode.

In comparison, the Coolpad Note 3 also has a 5-inch display with the same resolution. What makes the Vibe K5 a better proposition is the brighter colours it produces compared to the Note 3 Lite. 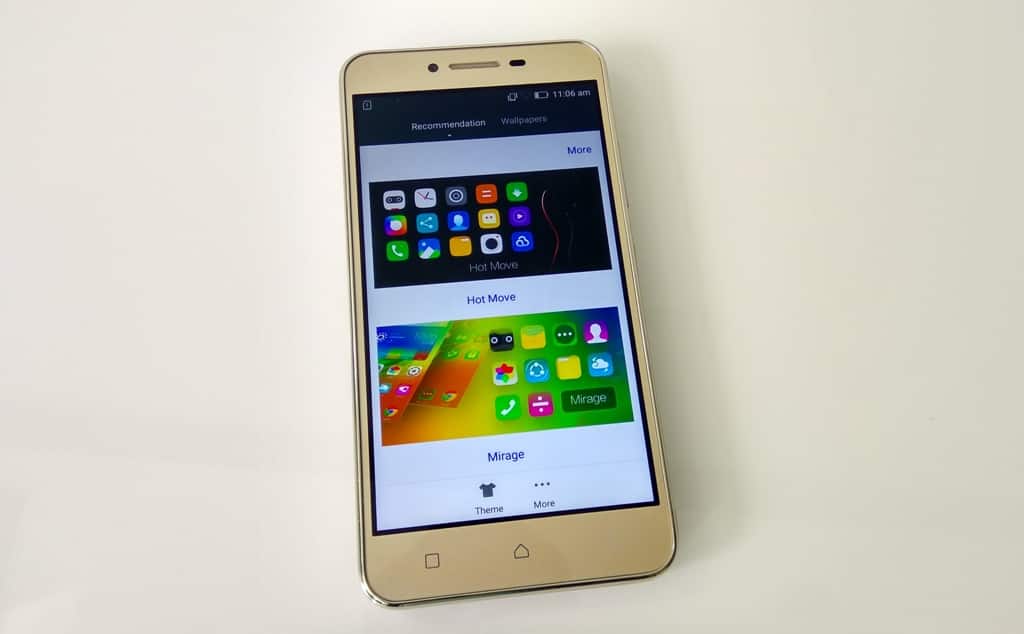 Most budget smartphones are still running on the old Lollipop (5.1) version of Android (except for the Moto E). Lenovo Vibe K5 is also one of them. However, it packs in two user interfaces (UI), which you can choose from. The Vibe UI allows plenty of customisations and looks really cool with its nice looking themes. The second UI looks more like plain Android with an app drawer and the white background. The interface feels a bit sluggish at times, but works well overall. Lenovo has pre-loaded some handy apps such as ShareIt, Sync It, McAfee security and Dolby Atmos. The Dolby Atmos is like an equaliser app for higher audio output. You can opt for a preset mode such as music, game or movie mode. Or you can use the custom mode to tweak the effects manually.

The Coolpad Note 3 Lite also uses its proprietary UI over Android Lollipop. It offers some customisations but lacks the visual appeal of the Vibe UI.

The phone, like most budget smartphones, runs on a Qualcomm snapdragon 415 quad core processor with 2GB RAM. We saw the same specs in the Moto E as well. The Vibe K5 feels a little sluggish at times, particularly while switching between apps and when you have immediately switched the UI. However, it was able to handle most tasks and games well, which puts it at par with its rivals. The phone supports 4G networks on both SIMs, and provides 16GB of internal storage which is expandable to another 32GB with a micro SD card.

The Coolpad Note 3 runs on a MediaTek MT6735 quad-core processor with 3GB RAM and felt a lot smoother throughout. It even handled a few games better than the Vibe K5. It provides 16GB storage and comes with 4G ready dual SIM slots.

Battery: Lasts a day at most

The Vibe K5’s 2,750mAh battery is pretty consistent and can see through a whole day on single charge if you don’t stress it too much. The Coolpad Note 3 packs in 2,500mAh battery but is pretty much on the same footing in terms of backup. The Vibe K5 is one of the few smartphone at this price point after the Coolpad Note 3 which offers a 13-megapixel camera. Colours look washed out while the slow image processing and the poor detailing spoils the whole camera experience. One can see the noise clearly even in daytime shots. The Coolpad Note 3’s camera is much better in terms of colour reproduction and slightly better in terms of detailing.

Lenovo Vibe K5 is a notable addition to the ₹ 6,999 price segment on account of its bright display, good design and cool Vibe UI interface. But the Coolpad Note 3 is still a better bet for the slightly better performance, more consistent camera and presence of popular features such as finger print sensor.