1937 Mysore Paints and Varnish | The ink of democracy

1937 Mysore Paints and Varnish | The ink of democracy 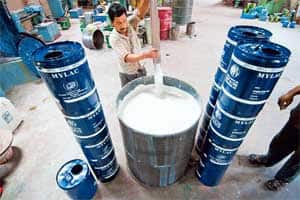 All in the blend: worker mixes a batch of 2K Polyurethane paint used to paint buses. Aniruddha Chowdhury/Mint

The Mysore factory, like many establishments from pre-independence times set up by the then royal family of Mysore, is a combination of new and old. Two structures were built at the time of the inauguration in 1937 and buildings were added as the company grew. Located in a quiet corner of Mysore city, 1km after you get off the Bangalore-Mysore highway, every Mysorean seems to know where it is. Ask for MPVL. “The lac factory?" they correct you.

“Many buildings in Mysore have great historical relevance. The palace, public buildings, parks and factories, there is so much," says Vinay Parameswarappa, who conducts Royal Mysore Walks across the city. While many of them are relics, MPVL continues to be relevant today.

By 1947 the company that was handed over to the government of Karnataka had started manufacturing paint. It was renamed Mysore Lac and Paints Ltd and was converted into a public sector unit. Wodeyar IV’s rule from 1902-40 had been a prosperous one for Mysore district, which saw the growth of industry, art and agriculture. It was under his rule that the Karnataka Soaps and Detergents Ltd (KSDL), famous for its Mysore Sandal soaps, and Karnataka Silk Industries Corp. (KSIC), which makes Mysore silk saris, were established along with several other industries. In 1989, the lac and paint company expanded further. It started making varnish and was renamed yet again, this time to Mysore Paints and Varnish Ltd, a name it retains today.

MPVL was now an integral part of Indian democracy.

The process of manufacturing the ink is a closely guarded secret and is based on a chemical formula devised by the NPL, with whom the patent of the product also rests. “We still keep the secret safe and still are the sole suppliers of indelible ink to the entire nation," says Kumar.

The ink was used for the first time in the Lok Sabha election in 1962 and has since been used in every Parliamentary election and almost every assembly and local election.

A sales depot in Mysore that opened in 1979.

Each bottle can mark 700 fingers. As the largest state, Uttar Pradesh receives the maximum quantity while the smallest amount goes to Port Blair in the Andaman and Nicobar Islands. In 1978, the company was asked to export its poster product to Singapore. MPVL now exports indelible ink to more than 25 countries.

On a walk through the laboratory on the Mysore campus, the managing team of the company is keen to show off their new inventions.

“We have been a profit-making public sector for nearly 22 years," says Kumar, adding that the company has been growing steadily for more than two decades now. MPVL had an annual turnover of ₹ 16 crore in the last financial year and a profit of ₹ 191 lakh.

Bottles of indelible ink used for elections have headed to over 25 countries since 1978.

But the invention they wear with the greatest pride is the lead-free paint that was used to decorate clay idols for the Ganesh Chaturthi festival for the first time in 2010. “The Mysore district authorities approached us to check if this could be made," smiles Kumar. After a year’s research they had the product in hand. “Lead-free paint is not as glossy as other paints but this year we had a meeting with small entrepreneurs who make these idols and have encouraged them to use our paints," says Kumar.