You could be A.R. Rahman or Loy Mendosa. An edgy electronica artiste or an independent composer of advertisement jingles. But if you’ve had even the faintest encounter with creating Indian music, chances are you’ve used the software of a small Switzerland-based company.

Swar Systems, based in the city of Rolle, makes music software that synthesizes the sound of Indian instruments—from string (sarod) and wind (flute) instruments to percussion (dholak). 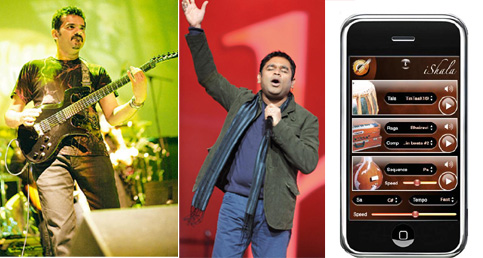 It has also just released SwarGroove, a program that lets you add Indian drum ensembles (in various folk styles such as bhangra, garba or qawwali) to recorded tracks and live performances.

Do you ever “spot" a SwarPlug use or sample when you’re listening to a piece of music?

Sharma:Whenever I go for a movie or watch a daily soap, I can easily make out Swar Systems products being used.

I remember once I was sitting at a restaurant and having lunch with some guests. Songs from Kabhi Alvida Naa Kehna were playing in the background. There was this particular song that had a very long sarod piece which caught my attention. I was convinced that the sarod was played using SwarPlug. I then wrote a mail to Loy of Shankar-Ehsaan-Loy, who confirmed that, indeed, they’d used SwarPlug for the sarod as no live musician could play that musical phrase as beautifully as it had come out. The song was Mitwa.

I still remember my meeting with A.R. Rahman when we launched south Indian instruments. He was busy but ended up spending around 45 minutes with us as he was really excited to see SwarPlug.

When you started, there weren’t any electronic versions of Indian instruments. Are there still specific areas or subgenres in Indian classical traditions that are under-represented electronically?

Etchepareborda: You mention the classical traditions when in fact these have hardly been explored. It was our intention at the beginning to go deeper into classical music with not only tutorials, but also developing the richness of the taal (rhythm) and raga systems. Unfortunately the market for such products is extremely limited, so we had to turn to more popular styles of music like fusion and filmi music. Our latest developments have mainly been for such composers, though we have tried to provide improvements to our current classical music software.

But you are right in your assessment of the situation regarding electronic Indian instruments. When we started, only Western instruments were available in electronic form. For others, the only offer was CDs of sampled loops, which is somehow limited if you want something specific. Now there’s software like ours, and samplers that tend to include some Indian instruments as well.

Can you tell me a bit about SwarGroove? Indian percussion is known for its complexity, so how did you work towards translating that into software?

Etchepareborda: Indeed, Indian percussion is arguably the most developed rhythmic system in this world. Fortunately for us we didn’t have to program all those rhythms and grooves from scratch. This is all the result of all the rhythmic sequences that have been put in our products from the very early stages in 1996, starting from basic patterns and evolving into full-fledged solos. The object-oriented model we have implemented allows us to reuse a rhythmic pattern into something more evolved. You can also customize it to the beat by defining the specific volume, strokes played, pitch modulation of each stroke. This then produces a result that can’t be differentiated from a live recording, even though it’s just MIDI events triggering sounds at specific times and with specific parameters.

Do you think platforms such as the iPad will be interesting in future for the creation of music?

Etchepareborda: At the moment, such platforms lack processing power. Even a simple software can take a long time to load, so I can’t really imagine running a full virtual studio on them, when currently you need a dual processor computer with 4 GB + RAM and terabytes of disk space to be comfortable. The display is also very limited, so I think personal computers still have a future. But there’s no doubt that such mobile devices will find their way in both studios and deejay equipment, probably more as controllers of the dedicated musical hardware/software.

Is piracy out of India still a big problem?

Etchepareborda: Piracy is indeed a serious problem, whether in India or abroad. In general, people feel that if it’s downloadable, then it should be free. Those who think a bit further imagine that companies must be making a lot of money anyway, so what’s the harm in getting a free copy? But the fact is that this attitude is a real threat to many companies that are trying to release innovative products. In our case, our market is very limited, so if users interested do not pay for the software we simply cannot cover the expenses of new recordings, graphics or manpower. Thus, we won’t be able to release new products in the future. It’s the cruel truth.