Although the desired ends of QE are noble, the means employed border on quixotic fantasy

Macroeconomics is perhaps the only subject that professes to be scientific, yet completely ignores experimental truth. Quantitative easing (QE) is as much an article of faith to today’s central bankers as geocentricism was to the Catholic Church. The US Federal Reserve’s (Fed) experiment with QE has shown that central bank money printing has little effect on inflation and gross domestic product (GDP) growth. However, despite the evidence, the European Central Bank (ECB) has become the latest major central bank to decide in favour of QE. It is true that printing enough money will induce inflation eventually. However, the method of money printing matters greatly. Classic deficit financing (debt monetization) where a government funds extra expenditure through printing money is quicker in causing inflation. This is because government spending usually puts money in the pockets of a large group with a high propensity to spend—labourers on infrastructure projects, bureaucrats, teachers, research scientists, etc. Their demand for goods and services leads to inflation unless domestic production can increase or cheap imports are available. Such monetization-linked inflation has been India’s experience during the Planning years and was also the cause of German hyperinflation after World War I. At this stage, one may argue that QE indirectly supports government deficits since the government can use QE-caused artificially low interest rates to borrow and spend more. While true, this is clearly not the case in the US (and other Western countries) given the emphasis on austerity and balanced budgets. Government consumption and investment expenditure in the US declined more than 6% in real terms from the middle of 2009 to the end of 2014 even as the Fed balance sheet expanded more than 120%. Moreover, such use of QE would be anathema to many of its architects. They believe in boosting private sector investment and spending through the pursuit of an easy-money policy. Their elegant models assume two things. One is that if they lower rates enough, you’ll borrow to set up a factory even if there are five existing factories operating at half capacity. Two, by boosting asset prices, they’ll make you feel rich so that you go out and splurge. The evidence suggests that QE has failed in both objectives (see graph 2). While private investment and consumption have grown since the second half of 2009, this would have been a natural outcome once concerted action from governments and central banks saw off the worst of the crisis. Indeed, such slow and steady recoveries have been the historic experience across countries once a Depression-like collapse is avoided. Further, claims that QE caused the post-crisis recovery seem dubious since accelerated growth of the Fed’s balance sheet has not been reflected at all in growth of investment and consumption. The self-congratulating champions of QE may be confusing correlation with causation. 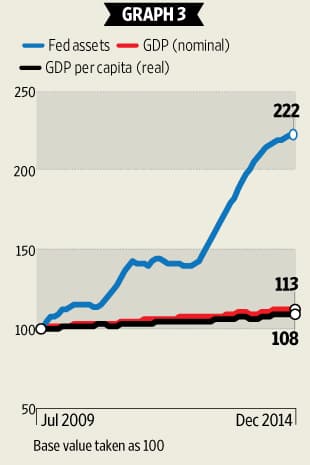 Despite the weight of evidence against QE, the ECB has decided to repeat the experiment in the belief of a different outcome. The good news for investors is that even though the policy is deeply dysfunctional with serious unintended consequences, it works well to boost asset prices. Fed’s multi-round QE led to a rally across the bond and equity markets—yields on US 10-year debt fell 1.35% between mid-2009 and end-2014. Simultaneously, the S&P 500 rose nearly 125%. If this levitation is representative, then ECB’s planned €1.1 trillion of QE (a nearly 50% increase in balance sheet assets) until September 2016 might lead to a similar rally in euro zone assets. This suggests investors should be looking to buy European assets.

However, bonds have already rallied substantially due to a combination of falling inflation, loose monetary policy and ECB assurances to preserve the union at all costs. German 10-year yields have fallen 2.75% since mid-2009 and the five-year trades at a negative yield. Other euro zone country bonds have also rallied to a similar extent. For example, Italian and Spanish 10-year bond yields have rallied in excess of 2% (compared with mid-2009) and trade near 1.5%. The impetus provided by the ECB’s QE may compress yields further, but the risk-reward is not attractive, especially given the simmering Greek situation that may lead to broader bond market ramifications. Shashank Khare is an investment professional and writer. After studying engineering at IIT-D and business administration at IIM-A, he entered the world of credit derivatives before CDS became a four-letter word. Having successfully batted through the crises, he now indulges his passion for economics, finance and policy.