Anurag Basu’s new film Kites is up for release this year. With a string of successful movies (Murder, Gangster and Life in a Metro) behind him, this is Basu’s first film with a big producer (Rakesh Roshan), a superstar (Hrithik Roshan) and a large budget. Kites is also making news for a steamy kiss between Hrithik Roshan and Barbara Mori. 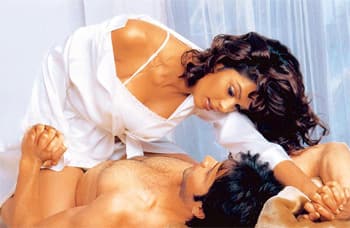 Play-acting: Good love scenes must be imagined beautifully by the maker.

Basu’s films have been talked about for their sexual content and we spoke to him about the challenge of filming intimate scenes. “Film-makers of our generation feel handicapped. We want to be as real as possible," he says.

Staying real without crossing the line into vulgarity is always a challenge. In Murder, the film that made much news at the time for its “bold" scenes, he wanted to show an affair between a man (Emraan Hashmi), and a woman (Mallika Sherawat) who has been in a sexless marriage for five years.

“I didn’t want it to be a gentle scene; I wanted Mallika to go all out because she had been deprived of sex for five years. Portraying that without going overboard was very tricky," he says.

Basu shared with us his checklist to shooting the perfect love scene on film:

1. If you see it beautifully, it’ll be beautiful. If there’s vulgarity in the maker’s mind, it’ll translate as sleaze on screen. Everyone on the set must be in sync with the way they see the scene and its context.

2. I try to go through the background of the actors to find some personal experience during which they may have gone through something similar. They can better relate to the emotions and feel like they’re playing themselves.

3. There should be a restricted number of people on the set. It’s very difficult for the girl to shed her clothes in front of so many people. She has to be comfortable with the director and trust the unit. If you think that someone is looking at you in a vulgar manner, you cannot perform.

4. Do not shoot the scene early on in the film’s schedule. Let the actors get comfortable with the unit. Then decide on a day to shoot and don’t give them any notice. I don’t like them to think too much before they shoot because when they come prepared, the spontaneity is lost.

5. Always have a Plan B ready. In all my films I have never forced an actor to do anything. Initially, Kangana Ranaut wasn’t comfortable with her kissing scene in Gangster. First, I explained to her what I was going to do with the scene. And then I told her we could go with a hug if she was uncomfortable.

6. The director needs to continuously talk to the actors while they’re doing the scene and remind them to stay in character so you don’t have to redo the whole thing. I don’t choreograph the scene too much because then it can become mechanical.

8. Have shots that are as tight as possible. Show close-ups of the part of the body that’s expressing. Concentrate more on the eyes because that’s where the passion lies.

9. It’s better to shoot in a confined area. It adds to the intimacy of the scene. The colours and the lighting are very important. The lighting should be such that some things are seen and some are left to the imagination. I had red light falling on Shilpa (Shetty) from a neon board outside the window in Life in a Metro.

10. Understand the strengths of the actor, concentrate on their assets. Like Shilpa has a beautiful waistline, so I asked her to wear a sari. The scene had Shiney Ahuja tracing her waist with his fingers.

11. And finally have a lot of breath mints around. Don’t shoot the scene soon after lunch and don’t let the actors have onions.