Arguably, they carry out the most important job in today’s networked world. You may call them geeks, nerds or wizards but these are the guys who develop the computer programs on which most of our planet runs nowadays. From buying bread online to booking airline tickets, or getting the answer to almost any question you may have to by making a phone call, it’s their specialized code or program that makes everything tick. We spoke to three individuals who work on devising and selling computer programs, to find out what makes up their working day. Gift of the gab: Sumeet Mulani believes excellent communication skills are a must to succeed. Photo :Hemant Mishra/Mint

After working for a year as a programmer with Ritwik Software Technologies Pvt. Ltd, a company that works on Web-based applications in Hyderabad, he moved to Bangalore to join Yahoo India in 2005, and hasn’t thought of moving since.

“When I was in school, I had the perception that you type any question into a computer and it will answer it for you. So, it’s sort of a dream fulfilled that I am working for a company which has a search engine that answers people’s questions," he says. He completed five years at Yahoo in August and won himself a gumball machine and the title of “gumball Yahoo" with a card that thanked him for “all the sweetness".

Daily duty: Work begins around 10.30-11am. First, there is a quick “stand-up" meeting of the engineering team, in which everyone gives updates on the work done and what they plan to do next. It’s meant to be short, hence no sitting, he explains.

Work at his desk begins post-lunch and ends at 9pm. “My brain begins to function only post-noon, so I might as well put in my best." Most of Mulani’s work relates to the database and functioning of the website, although his job description keeps changing with the project he’s working on. His profile involves some team management. “I do give technical guidance and coordinate some aspects, but I work with a team based in the US as well and do bits and pieces as per their requirements," he says. Although Mulani communicates the day-to-day progress to his project team, distributed between India and the US, most of his day is spent in front of his system, producing code that will form the backbone of the website.

What I love about the job: “Every day is different, so I never get bored."

Success mantra:An engineering degree with a specialization in computer science from JNN College of Engineering, Shimoga (Karnataka) has helped him but what’s been most useful is his ability to come up with practical solutions to problems. “Since software components should not be designed in isolation, one must know the big picture and think about how your component would talk to other pieces of the entire system. Excellent communication skills are a must," says Mulani.

Sanity saver: DJ-ing. Mulani runs a monthly podcast online and has a steady audience across the world. Also, he has sessions with co-workers where they write tiny programs called hacks. “Hack is a misconstrued word. A hack is a good piece of code as opposed to ‘crack’, which means breaking into it," he explains, adding that hacking lets his mind break free.

One thing I would change: “Really nothing. I am enjoying myself right now."

Money matters: The annual package is usually between Rs10-15 lakh. Spin is important: Bad news or delays must be communicated in a positive way, says Shilpa Shah. Photo :Sandesh Bhandare/Mint

It wasn’t always so. “We’ve spent months and years in different continents. There was a time when I was in Japan and Hemal in Australia, then he was in the US and I was in India, and then I was in Israel and he was in Pune. But now even though we work in completely different departments and have our lunch in different food courts (on the same campus), we commute to and from office together," she says.

Daily duty: As a project manager, Shah is in charge of vital system maintenance work for telecom clients. Much of her day is spent managing people and deadline-related issues. “When I first began my career, I used to write a lot of code and was involved in hands-on development. Today, it’s more project management and monitoring timelines."

Work begins at 9.15am and on most days there is an average of 200 emails to be attended to. Because different parts of an IT system are so interrelated, a problem in one module means liaising with other vendors and firms. Then there are the twice-a-week conference calls with delivery managers at client sites, where the team discusses progress on the projects and issues involved.

What I love about the job: “Working with people, being part of a team."

Success mantra: Shah has a bachelor’s in engineering (computer science) and worked at Oracle for three years before joining Infosys in 2000. Her present role involves “stakeholder management", which basically means “managing perceptions, whether for your teammates or for the client". “And if you have to communicate bad news or delays, it’s important to be able to do it in a positive way."

Sanity saver: Not installing cable TV at home. Visiting family members, such as Shah’s mother (who lives in Mumbai), grumble, but she says it’s worth it. There’s much more time for things she enjoys. Currently that includes playing the Spanish guitar on which Shah has just perfected her rendition of Summer of ’69. She also enjoys outdoor activities, be it trekking in the Sahyadris or paragliding in Kamshet.

One thing I would change: “The perception about computer programmers being nerds—we have a lot of fun and are very social."

Money matters: Industry estimates put the annual compensation package at Rs20-50 lakh, depending on the firm, performance incentives and location. 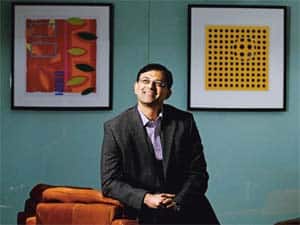 The ‘P’ factor: Subhomoy Sengupta believes patience and perseverance are critical, because sales cycles are long and it takes time to convert people. Photo :Pradeep Gaur/Mint

Daily duty: Sengupta works out of the Gurgaon office and his work day usually starts at 8.30am; the day in Mumbai began earlier, at 8am, since he had to meet a candidate for a senior account manager’s position over breakfast. This was followed, as most days are, by a series of meetings. Besides the internal team meetings, there’s a meeting with a customer, a piped gas company looking for a software solution.

The piped gas company is part of Sengupta’s diverse set of customers. “It’s this variety, from an automobile parts supplier to a retail chain to an insurance company, and the challenge of understanding the business model of each, that makes this job so stimulating," explains Sengupta. As head of the Enterprise business solutions division, Sengupta and his team of 25 have to configure the specifications for each individual customer.

There’s also a high degree of interaction with other Microsoft divisions; the 750-strong staff in the sales division which cross-sells all Microsoft products, as well as the 5,000-plus India team involved in development and, of course, the quarterly visits with meetings at Redmond, California, US.

What I love about the job: “Being a part of this industry now when history is being written, with changes like the move to cloud computing."

Success mantra:Sengupta has a degree in electrical engineering from IIT Kharagpur and an MBA from IIM Calcutta with a specialization in computer systems and finance. So even though Sengupta has never been involved in programming or writing code on the job, this technical background gives him an edge. “Having done systems courses has helped me understand the customers’ requirements better. It also helps in my interaction with the software developing teams," he says.

Ultimately, however, it’s the people skills that count even more. “You need to understand what the customer’s business model is, and what he needs to change in order to be successful." Patience and perseverance are critical: “We have a long sales cycle and it takes time to convert—hence you need patience."

Sanity saver:Weekends doing math and physics with his 13-year-old son Shayon, playing tennis, and travelling with wife Mitul and Shayon. “Every year we visit a different part of the world. We just got back from Egypt; last year we were in South Africa, the year before in New Zealand, and before that Europe and the US."

One thing I would change:“I’d like to be able to take time out to do the things I enjoy, such as painting. Also playing golf, which is something I still have not managed to do."

Money matters: Compensation at this level could be anything from Rs75 lakh to Rs2 crore per annum. At Microsoft, approximately 65% of the compensation is fixed—the rest is variable and performance-related.

Every month, we explore a profession through the lives of three executives at different stages in their careers. Tell us which profession you want to know more about at businessoflife@livemint.com