Pune to Bhilar: The book village

Bookmark this village with stunning murals for a stimulating literary break

Clement weather, a glass of wine, a bowl of strawberries and a sky painted in orange and purple brush strokes—perfect companions to a good book. This balmy setting, at the country’s first village of books, is not fictional. Sitting between Panchgani and Mahabaleshwar, this little strawberry village is based on the concept of Hay-on-Wye, a Welsh village known for its book stores. The idea was floated by the Rajya Marathi Vikas Sanstha and state education minister Vinod Tawde, and, on 4 May, the village was given its formal identity of Pustakanche Gao.

Making the most of a breezy, cool weekend, a friend and I decided to head to Mahabaleshwar, an easy getaway option from Pune. As we left the traffic-clogged city, we found ourselves on a winding black tarmac ribbon surrounded by a million shades of green. The hills played peek-a-boo with wispy white clouds. Waterfalls gushing down the low hills invited us to stop.

About 100km later, we stopped at a tea stall at Panchgani market. The aroma of freshly brewed ginger tea and roasted spiced Bengal gram drew me to it. A nondescript board caught my eye. “Pustakanche Gao Bhilar," it read. Curiosity egged us on to follow the board, forgoing Mahabaleshwar, which was about 20km ahead. The plan was cemented by a large hoarding outside a wine factory outlet encouraging tourists to “enjoy a book with strawberries".

Driving down the village street, still squishy from the previous day’s shower, we could see the unique concept revealing itself on brightly painted homes depicting the genres they housed.

We stepped into the first house that caught our fancy—one with Warli art on its walls, and known for folk tales. As I browsed through the shelves of folk stories, the owner of the house, Narayan Wadkar, showed us the visitors’ book, with words of appreciation penned by some well-known Marathi writers. He explained that 25 families have opened up their homes for book lovers to read and research from a choice of almost 15,000 Marathi and 500 English books provided by the state administration.

He pointed us to the two-storey house “Mangaltara", painted with images of forts and the Maratha king Shivaji. “It stocks books on history. Others have children’s books and books ranging from literature, environment and tourism, to nature and more. In fact, the village is more like a huge library and has something for everyone," he explained.

We spent hours browsing through just one genre—and there were 24 other doors to knock on. A rumble of clouds forced us to head to the cottages we had booked at the Maharashtra Tourism Development Corporation resort at Mahabaleshwar.

The earlier plan to spend the weekend amidst waterfalls in Mahabaleshwar made way for Bhilar next morning. This time, we strolled though the entire village. The homes with books were easy to spot, marked as they were by colourful signage. At our first stop, we picked up a handy map to steer us to the other homes. A volunteer in the village told us that almost 70 artists from an artists’ collective from Thane, called Swatva, had given the village walls a colourful backdrop, creating stunning, wall-high murals. 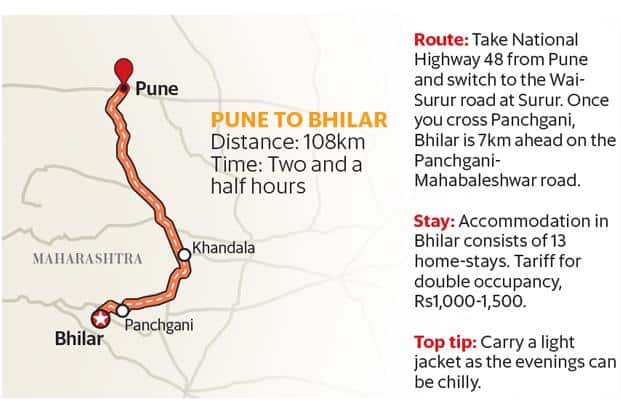 After taking a peek into most of the homes, we stationed ourselves in the village library. We weren’t alone. A large family of teens, parents and grandparents sat silently, flipping pages—a poster image for a perfect weekend getaway for families.