Manchester United Café Bar is a franchise of one of the most successful and richest football clubs in the world. Such outlets are opening all over Asia to cash in on the club’s popularity in these parts of the world. The bar in Lower Parel is the first in India and can accommodate 150 people. 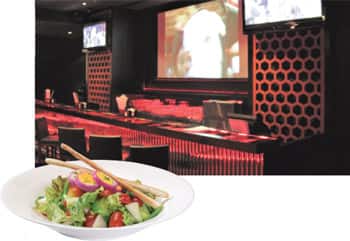 The bar opened on 6 February, a date famous in the club’s history: In 1958, eight young club footballers, popularly known as the “Busby Babes", died in a plane crash in Munich on their way home. On one of the walls of the café, a video installation with the day and time commemorates the tragedy. Another portion is adorned with photographs of key moments in the club’s history, such as the 1999 “treble" (three trophies) win.

The bar is a riot of red and black. There is a chandelier of sorts—an inverted red and black dome shaped like a football hanging near the entrance. The space between small booths/cubicles is filled with red footballs stamped with the team logo. A section of the bar is shaped like a dugout (a place where the reserves and managers sit during matches) and has comfortable couches.

The star attraction is, of course, the two giant screens powered by projectors. Apart from that, there are a few smaller plasma screens, all showing football. On days when there are no live matches, the bar promises to exhibit re-runs of the club’s famous victories and player biographies.

All the staff and a majority of visitors sport Man U jerseys or scarves. On the opening day of the bar, just before the match between Manchester United and Portsmouth started, there was a lusty rendition of Glory Glory Man United, the team’s anthem. Waiters whistled, bartenders danced and fans chanted. Behind the bar is a private enclosure that can be booked for parties of 20-odd people. This is cut off from the rest of the house, has its own bar and is called the “7" room. No. 7 is the jersey number of the club’s most famous stars, such as George Best, Eric Cantona and David Beckham.

Prashant Narula, head of business operations, says souvenirs such as jerseys, pens and mugs will be available from this weekend.

The bar scores a self-goal when it comes to food. The starter menu is stacked with Oriental food. While I won’t quibble about the portions, the Dragon Spring Rolls (Rs175) were oily and the Schezwan fried baby corn was tasteless. A friend who ordered the Chilli Squid ’n Peppers (Rs225) couldn’t finish the dish as it was too bland. A section of the menu called the Italian League was as dour and defensive as the brand of football played in the country, with unimaginative offerings such as margherita pizza and penne arrabiata.

To top it all, the service was abysmally slow, though in its defence one must remember the place is still new. When we arrived half an hour before the match, the bar was only half-full; but the staff was totally unprepared and we had to wait 20 minutes before we got our beers.

On match days—typically weekends—there is a cover charge of Rs900 per head which includes unlimited local beer (read Kingfisher) and a vegetarian starter. A shot of New Zealand-import 42 Below vodka costs Rs225, while a Margarita costs Rs375. VAT and service charges are extra.