Why do we need an award for female journalists, or “outstanding women mediapersons", as the citation for the Chameli Devi Jain Award says? Prizes are a mark of merit, and there is less merit in categories which exclude competition on the basis of qualities like gender. Sceptics will ask: How would women like this reviewer, who applaud honours like the Chameli Devi Jain Award, feel if someone set up an award for male journalists only?

Some day, when sexism falls into disuse, that may be a valid question. But as supporters of identity-specific prizes keep pointing out when this argument erupts (as it does frequently) over awards that recognize the work of women, LGBT people, or people of colour, there are two aspects to awards like these. One is to reverse the relative invisibility of work by “minority" identities in the mainstream, by celebrating work that is unfairly sidelined in an imperfect market. The second is to recognize the story behind the story; to understand that works that win, for example, the Orange or Lambda prizes, are the latest participants in traditions that have faced unique challenges in coming into being. Those who find identity-specific prizes divisive or offensive in some ways should perhaps note a fundamental fact about the existence of such celebrations: Sometimes, not everything is about people like us. 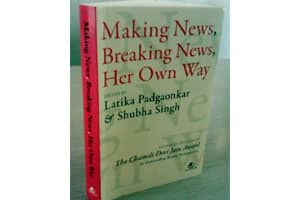 The prize was first awarded in 1980, a time when women had entered the media workforce in larger numbers, but were “still on trial in the eyes of male proprietors and editors", as president emeritus of the Media Foundation, B.G. Verghese, writes in his preface. Since then, it has gone to women who have covered war, terror and regime changes, as well as to those who, in earlier times, covered the issues left over once male reporters had chalked off their own territories on the front page.

“So it was that when India woke up each morning and shook out its daily newspapers," writes Shahnaz Anklesaria Aiyar of the 1980s, “it was often women journalists who informed them of the state of their schools, hospitals, prisons and orphanages. After the initial reports of riots, droughts and floods had made the headlines, it was often women journalists who went back to the scenes of carnage or devastation and gave its victims a voice, telling their stories of quiet or repressed human suffering, bureaucratic neglect or worse." The anthology works in chronological order, with one exception: The winner of the 1999 award, NDTV 24x7 group editor Barkha Dutt, opens the collection, writing in memory of the 1982 awardee, her mother Prabha Dutt.

In the pages following, the Chameli laureates—some of whose bylines may be unfamiliar to newer readers—reflect on newsrooms past, the changes that came with the pioneering work of women who moved out of the “food, fashion, flower shows" beats and wrote, instead, about Maoist activity in Bastar (Sevanti Ninan, winner, 1982), tribal land acquisition (Sheela Barse, winner, 1984), the Bofors scam (Chitra Subramaniam, 1989) and the stock market (Sucheta Dalal, 1992).

Both the award and its early awardees clearly have the Indian women’s movement in its particular moment in the 1970s and 1980s to thank. As Verghese says in his preface, the Chameli award highlights not just a new strain of what he calls “gender assertiveness", but also the opening up of front pages and lead stories to new kinds of reportage, about subjects not previously considered.

It is particularly interesting to see how issues widen and the profile of the awardees expands as the collection progresses: from big cities and formidable old broadsheets to the independent media collective Khabar Lahariya in Chitrakoot, Uttar Pradesh (represented here by Shalini Joshi and Disha Mullick, who helped establish the group) and the establishment of Nagaland Page, a Dimapur daily founded by Tiamerenla Monalisa Changkija, the 2009 Chameli awardee.

Many of the essays in this collection reflect on the future as much as the past. In an industry where forms of media and space for news are expanding, they ask, is the focus on the public interest shifting? In a world where media content seems to fall back more and more often on “soft news", do women journalists have particular responsibilities?

Making News, Breaking News, in spite of its clumsy title, achieves a beautiful sonorousness through the voices of some of the country’s best writers and reporters: It represents its idea so well that even casual readers, not invested in feminism or the Indian media, will find ideas and stories here to enjoy. To those who do take an interest in social history, the anthology will be invaluable.