As a teenager in the Goan village of Curchorem, Franklin Fernandes spent long hours practising the trumpet with only one goal in mind: he wanted to “play like a negro". It wasn’t an ambition his teacher, Maestro Diego Rodrigues, would have understood. Like all teachers in Goa’s parochial schools, Rodrigues coached his charges in musical theory and instructed them in the art of playing hymns and Western classical music. It was all very baffling. “But when we heard the records, we knew how to play the notes," Fernandes said. The thick shellac records that set him off on his journey of discovery bore the names of Ellington, Armstrong and Cab Calloway, and Fernandes grew addicted to hot music. Jazz, he said, gave him “freedom of expression". He still looked at the sheet music, of course, but he knew that it could take him only so far. “Like Indian music, jazz can’t be written," he said. “You have to feel it. There are 12 bars, but each musician plays it differently. You play as you feel—morning you play different, evening you play different."

Frank Fernandes grew so enamoured of the new music from America that in 1936, aged 16, he decided to make jazz his life. He headed to Bombay, where, like so many other Goans, he hoped to find work in one of the city’s famous dance bands. Of course, it wasn’t quite so easy. Competition for jobs was intense, so Fernandes—who would soon adopt the stage name Frank Fernand—began to work for the Bata shoe company in Mazagaon for 12 annas a day. After work, he performed at the amateur nights at Green’s hotel, hoping to attract the attention of someone who mattered. Like Fernand, other Indian musicians had also come to value the freedom that jazz allowed them. Indians had been playing hot music, with varying degrees of proficiency since the 1920s. In 1937, when Teddy Weatherford took over leadership of the band at the Taj from Crickett Smith, as age began to catch up with the trumpet player, several Indians had become skilful enough to play alongside the African-Americans. A photo of Weatherford’s band from 1938 shows three Indians looking out from behind their instruments. Two of them were brothers: Hal and Henry Green, from Bangalore. Their father, Cecil Beaumont Green, was an army surgeon who had fought in the Boer War before becoming the personal physician of the ruler of Mysore. Hal Green, the fourth of the doctor’s six children, had begun his musical education on a reproduction copy of a Stradivarius that his father had given him. He was an autodidact. He devoured American films and records to learn as much as he could about ragtime and Dixieland music, also teaching himself about European classical music on the side.

Before they joined the Weatherford band, Hal Green and his younger brother Henry had led the eightmember Elite Aces at the Taj in 1933, performing what Ali Rajabally described as dance music with a jazz accent. Hal Green played guitar, reeds and the violin, while Henry was a bassist and saxophonist. “The type of music they had brought with them may be an overworked cliché today but it was an unheard of departure then," Rajabally wrote. “Night after night, Hal and his alto sax drove the band through performances so exultantly searing that no band in the country, local or foreign, could have successfully challenged them for the No. 1 spot." The Correa Optimists in the early 1930s.

In 1939, the outbreak of World War II in Europe shook up Bombay too. As barrage balloons went up over the Oval maidan like “a school of enormous airborne white whales", in the description of one young observer, German and Italian residents were taken into custody or fled the country. Beppo di Siati, Frank Fernand’s Italian bandleader at Majestic Hotel, was among the enemy nationals interned. As the conflict spread, Bombay became the temporary home to troops from Australia, New Zealand, Canada and England, passing through from the Eastern front to Africa and Europe and for soldiers from the Western theatre of war on their way to the Far East. The journalist Dosoo Karaka observed the influx with his usual cynicism. “The city," he wrote, “was a halfway house for the cannon fodder of [the] great war."

En route to the front, the soldiers created quite a commotion. One observer recalls Australian troops commandeering the horse-drawn Victoria carriages that thronged the street outside the Taj, pushing the driver into the backseat and racing one another through downtown Bombay. “The crowds roared their applause," he wrote. “The Aussies could have perpetrated more danger in Bombay than they did on the battlefield." The arrivals weren’t all male. Allied officers brought their wives, while other Englishwomen realised that it would be prudent to wait out the war in the safety of India. There were refugees too—Poles, Danes, Czechs and Jews from Germany and Eastern Europe.

Karaka went into a funk and couldn’t bear to listen to any music at all. He became addicted to the wireless. “The news bulletins were the funeral marches of our modern composers—the men of the Hood, the men of Dunkirk, the men who died in the huge craters of Crete. That was the music of this generation—the music we were destined to hear," he wrote. “Music that was written on the casualty lists, the dead being the flats and the wounded with their anguished cry being the sharps." The most durable of all the war-time bands was headed by Micky Correa, a saxophonist born in Mombassa who had perfected his craft in Karachi with his family band, the Correa Optimists. When he moved to Bombay in 1937, he played with Beppo di Siati’s Rhythm Orchestra at the Eros Ballroom, famed for its sprung dance floor. At the band’s next engagement, at the Majestic Hotel, he performed alongside Frank Fernand and shared a room with the trumpeter in Dhobi Talao. In 1939, Correa formed his own band at the Taj—and set a record of sorts by staying there until 1961. Perhaps the longevity of his stint at the Taj was the result of his physical endurance. Correa prided himself on his fitness and exercised regularly with dumbbells, following the techniques devised by the Canadian bodybuilder Joe Weider. He also knew how to please a crowd, never turning down requests. The Taj publicity brochures described Correa as a musician who was “untired of repetitions".

Correa’s orchestra at the Taj was a hothouse for Bombay swing. The men and women who would go on to lead the city’s most popular groups found early encouragement on his bandstand: saxophonists Johnny Baptist, Norman Mobsby, George Pacheco and the Gomes brothers, Johnny and Joe; trumpet players Peter Monsorate, Pete D’Mello and Chic Chocolate; and pianists Manuel Nunes, Dorothy Clarke and Lucilla Pacheco, among others. Recalled Ali Rajabally: “The Bombay jazz scene was honeycombed with virtuosi of high calibre. The pace was intense, but it was carried on in a spirit which placed the love of jazz above every other consideration. Nobody played with one eye on the cash-box and the other on the clock." The cover of Taj Mahal Foxtrot.

Cotton started by playing the trumpet, but decided to dump his horn after dropping by the Taj one day in 1936 and being captivated by the smooth tenor sax of Cass McCord. He was an early follower of Lester Young. “In those days, Rudy was often criticised for having a soft, what is known today as a ‘cool’ tone," an amateur musician named Rusi Sethna told Blue Rhythm magazine later. “Rudy belonged to the modern school of tenor playing but that term came into being recently while Rudy has been blowing like that ever since I can remember."

Rudy Cotton’s big break came when he was hired by Tony Nunes, the pianist who headed the Teetotallers band, but he credited his ability to really “feel jazz" to the stint he spent in the orchestra of Vincent Cummine, playing alongside such talents as Cummine’s violinist brother Ken, the bassist Fernando “Bimbo" D’Costa, the drummer Leslie Weeks and the spectacular trumpet player Antonio Xavier Vaz, who was already winning legions of fans under his stage name Chic Chocolate. Cummine’s band travelled to Rangoon in 1938, but by 1940, Cotton had formed his own group, persuading his former bandmates to join him, and adding Sollo Jacobs on piano.

“As anyone who knows the history of Indian orchestras can well imagine, this combination proved a tremendous success overnight and from then onwards Rudy’s fame was on the upbeat," The Onlooker magazine reported. Bookings poured in from the Taj, the Majestic and the Ritz, among other establishments. 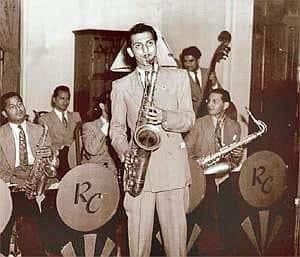 The busiest of all the war-era bands was led by the inimitable Ken Mac, who had managed to retain his hold on the Bombay dance-music scene long after Leon Abbey’s departure. By the mid-1940s, Mac was being signed up for about 40 engagements a month. Every Wednesday, he played regular shows at the YMCA on Wodehouse Road for Allied troops. His crooner at that time was Jean Statham, whom he later married. Occasionally, his young niece, Pamela McCarthy, would sing a tune or two. She had been stricken with polio at the age of 11 and performed from her wheelchair, dressed in a glamorous ball gown. It was a hectic life. “Music and dancing was so popular and we played all the top venues—the Taj, Ambassador and Ritz Hotels, the Radio, Willingdon, Yacht Clubs and Bombay Gymkhana to name a few," said McCarthy. “Sometimes we did two sessions a day—an evening dance and later a night dance."

Mac also made regular radio broadcasts and cut dozens of swing-tinted records. The first, “Down Argentina Way", sold more than 25,000 copies. Mac told one interviewer that there was much more to being a successful bandleader than merely having to ensure that the musicians played the right note at the right time. “He is the band’s star salesman who must obtain the most favourable terms," the journalist wrote. “He has to make sure the boys will meet always on time and are dressed as they should be. He has to exercise tact and good temper to smooth out frictions and difficulties. He is responsible for building up the library—as the sum total of all the band numbers is called."

Bombay’s band leaders obtained their music from publishing houses and from local cinema distributors, and listened hard to the radio and to new records. All the best bands had their own arrangers, men who wrote the parts of each instrumentalist in a unique way so as to make their outfit’s version of standard tunes stand out from their competitors’. Indian musicians were also beginning to compose their own tunes. Pianist Sollo Jacob had written a foxtrot called “Everyone Knew"; Hal Green, already a much-in-demand arranger, had composed tunes he called “Copacabana" and “Get Out of the Mood and Into the Groove", while Chic Chocolate was performing his “Juhu Jive".

Naresh Fernandes is a consulting editor at Time Out India. This is his first book.

Excerpted from Taj Mahal Foxtrot: The Story of Bombay’s Jazz Age by Naresh Fernandes; published by Roli Books, accompanied by a CD of original recordings, 192 pages, ₹ 1,295 (the book may be pre-ordered on Flipkart.com). Taj Mahal Foxtrot will be released on 20 December.