As a senior assistant editor at The Indian Express, and after 10 years in journalism, Leher Kala, 34, had a feeling that her career had plateaued. For two years she toyed with the idea of venturing out on her own but the security of a steady job in times of global economic crisis held her back. Finally, in April, Kala launched Hutkay Films Pvt. Ltd to make short, snappy, high-definition “celebration movies" of events such as weddings, anniversaries, corporate events and award ceremonies.

One serendipitous day, while rearranging her bookshelf, she chanced upon the video of her own wedding. “I can’t begin to tell you how mortifying it was," remembers Kala. It had amateur written all over it. “I looked terrible. My husband looked terrible. There were random shots of people about whom neither of us had any clue. It was boring, and it was interminable." While she and her husband had a hearty laugh over the shoddy video, Kala realized that traditional wedding videos, a few years down the line, are good only to raise a few laughs. 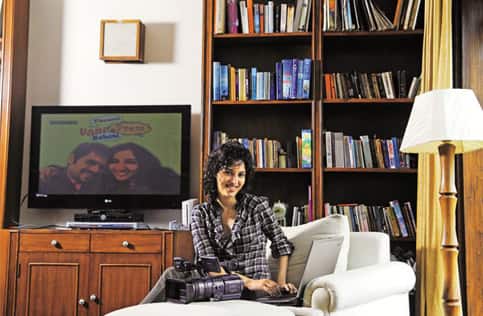 Take two: Hutkay Films was not Kala’s original choice of name for the company, but she is glad she chose it over the more ‘limiting’ Happily Ever After. Pradeep Gaur / Mint

In an earlier life, Kala had worked in the Hindi film industry and as a journalist with the Aaj Tak television channel, and she was confident that she could have documented the wedding much better. “I know people whose wedding budgets are around ₹ 3-4 crore. They want the best of everything, yet for footage of their weddings, the truly once-in-a-lifetime experience, they were paying ₹ 15,000-20,000 to random videographers. I wondered if they wouldn’t want a professionally shot and edited album," Kala says.

That seed of an idea germinated into Hutkay Films after a chat with her former boss at Aaj Tak. “I knew I could do it, but I needed to know if it was a saleable idea. He not only endorsed my idea, but said it had huge potential since nobody else was doing anything similar," says Kala. With his endorsement, the usually risk-averse Kala quit her job in January. In February, she got her first client—Vasant Nath, a scriptwriter and film-maker who was getting married in April. 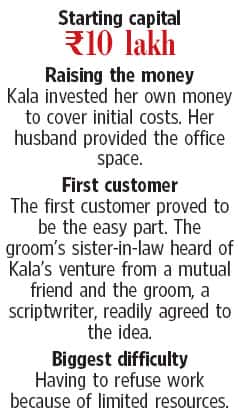 Over the next couple of months, Kala set up office in a space provided by her husband, registered the company, hired a full-time secretary and an accountant and a part-time cameraman and editor and was ready for business. A 30-minute film on the mehendi, sangeet, shaadi and reception includes interviews and anecdotes from guests and relatives, old photographs and a narrative about the couple. “For the first film, Vasant and Vani’s Prem Kahani, I met the couple’s friends and relatives to learn about their story: how they met, when did they fall in love, who proposed and how. While shooting I focus on only the people who are important to the couple," says Kala.

Hutkay Films has produced 11 movies, including one on the launch of the Delhi Art Gallery at the DLF Emporio mall, Vasant Kunj, Delhi, and two films for the The Indian Express, including the FE Best Banks Award. The rates vary depending on factors such as the length of the event and where it is being held. “Corporate events are shorter and better organized, so the rates are less than weddings. Weddings, typically, are four-day affairs minimum. And there are numerous rituals to be shot. The wedding day itself demands a day-long shoot. I have four people working with me for the shoot. Besides, the editing process takes about two weeks. This adds to the cost factor," says Kala.

Kala is now working on a baby video. “A baby video is shot over a year, one day every month from 0-12 months. These were not what I had in mind when I started, but as people got to know about Hutkay, they came up with their own ideas. They wanted me to document their special moments, be it a 40th anniversary or a baby’s first year, and the original idea evolved," says Kala.

It has been a challenge convincing some clients that the 30-minute length is what makes the film fun. “If you’re shooting for four days, they think you’ll give them a 2-hour movie. Convincing them that it would kill the movie and make it utterly boring is a task," Kala says. So she strikes a compromise: She makes her version of the 30-minute movie but she puts the additional unedited footage on the DVD too.

Another problem has been trying to keep a check on overheads. “To start with, I did not have any money for cameras and other equipment, so I hired those. That adds to the overhead. But now I’m buying a camera and getting my own editing set-up. Hutkay Films now has a signature tune and I’ve commissioned 3D animation for the titles and credits. The graphics is proving the costliest," she adds.

That’s something Kala doesn’t even want to think about. And she is quietly confident she will not need to (in the four months since she’s been in business, she says, she has recovered her initial investment and met her overheads). Instead, she plans to invest in equipment and hire some part-time staff to be able to take on more work. “If at all I need a Plan B, there’s always journalism," she says, grimacing at the thought of going back to a job with fixed hours.

The simplicity and uniqueness of the idea are its greatest strengths, says Kala. And the first-mover advantage. “The market’s huge and untapped."