In 1929, British author Virginia Woolf published an essay titled A Room Of One’s Own in which she argued that women must have spaces of their own if they were to become writers of fiction. Nearly 90 years later, a group of four girls from villages in Uttar Pradesh’s Karwi district arrived at a similar conclusion based on their own experiences: “Jab ghar bane, hum ladkiyon ke liye ek alag room honi chahiye, jo bhi karne ke liye—facebook ke liye, Internet ke liye—jo bhi (when houses are made, there should be a separate room for girls to do whatever they wish, whether to surf the Internet or go on Facebook)." Earlier this year, a group of four girls—aged 15-18 years, from low-income families, some Dalit, some Muslim—spoke of desire, shame and freedom, or rather, the lack of it, while viewing a series of images compiled by Delhi-based artist Baaraan Ijlal. The images were chosen for the way girlhood has been represented in popular imagination, and their conversation was recorded. Ijlal repeated this exercise with three other groups of girls, varying from two-six in number, in Bhopal, Lucknow and New Delhi.

The girls remain anonymous, but the conversation and the video clips that they watched form part of Ijlal’s most recent work of art, a sound and video installation in the shape of a modified bioscope, titled Birdbox. Looking in through one of the four “lenses" in the hand-painted trunk that forms the body of the bioscope, you can see the images that the girls saw—Alia Bhatt in a clip of the 2015 film Highway, a Khajuraho sculpture, the 1980 Bollywood song Mein solah baras ki starring Tina Munim and Rishi Kapoor—and, with the aid of a headset, listen in on edited versions of any of the four recorded conversations from each city. The fly-on-the-wall approach is highly effective, and some of the things that the girls talk about are at once poignant and funny, silly and significant, probing and astute. “What I want people to take away from this is how and why anonymity is working here," says Ijlal.

The conversations are revelatory not least because, as a culture, we don’t set much store by the young—everything from policies and laws to films about them are made by (much) older adults. But there is an even more pressing reason to listen to girls’ conversations, says gender and education activist Dipta Bhog, who worked on a study along with media practitioner Disha Mullick in 2015.

Titled Collectivizing Girls for Social Change: Strategies From India, the study commissioned by the American Jewish World Service mapped the experiences of seven organizations working with women and young girls. It recognized the role that girls’ collectives played in empowering them, especially when they were backed by already existing women’s collectives in the region. It presented their strategies and showcased how such collectives have had maximum impact in the fields of education and sexuality.

The graphic novel, illustrated by Ikroop Sandhu and Samita Chatterjee, has three stories—of a group of girls who come together to form a football team and together take on issues of domestic violence, early marriage and opposition to their playing; of a collective of young Dalit cotton-pickers in rural Telangana who take the assistance of a women’s collective to fight for equal pay and better working hours, and get it too; and of a group of sex workers’ children in West Bengal, who dare to dream in the face of taunts and humiliation.

Through the graphic novel, there is an attempt to redirect the course of conversation about the “girl child" from being the singular object of attention of policy documents and developmental agendas to the beneficiary of backing provided by women’s groups and of collectives of their own, says Bhog. “Women’s rights and girls’ rights are inextricably tied, but in the last 10 years there has been a shift in the development world internationally, in youth policy, and with funding shifting to young girls. The idea touted is to ‘give them education, aid, etc and they will get married later, and have fewer children’. Women’s groups are not seen as part of the strategy to work with young girls’ groups. This break is a tragic thing," Bhog says. 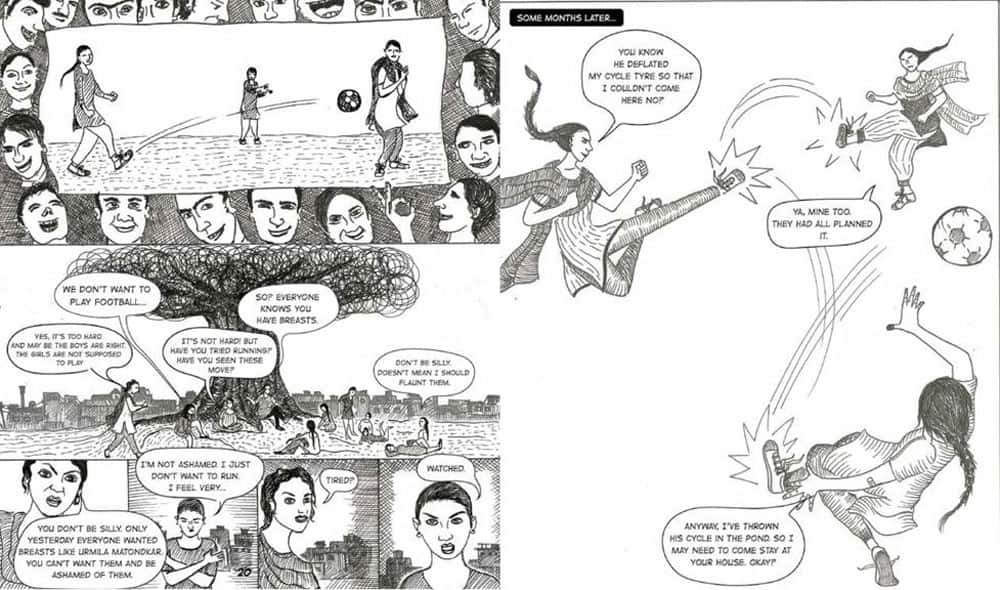 The United Nations, the World Bank and other similar global development bodies make a compelling argument about the need to invest in the “girl child", using statistics and individual voices. This approach, say Bhog and Mullick in the foreword to the graphic novel, creates a Tragic Girl, or Supergirl narrative. “The Tragic Girl protagonist-soon-to-turn-Supergirl, featuring in most reports on girls, seems to have little idea about the strategies that girls or women have adopted to resist or fight for what they wanted, decades before her. The Tragic Girl is isolated in her troubles, of being pulled out of school, married off early, being last to get dinner, not allowed to laugh or play or talk on the phone. Getting to school unleashes her superpowers. Before you know it, she’s jumped into a terribly dilapidated classroom with an equally non-functional toilet and changed her life and the world. Unfortunately, real life has few superheroes, and even the ones we have appreciate the backing of a group and some social interaction," they write.

Take for instance, the story of the cotton-pickers, The True History Of The Gulab Cheli Sangh. It starts with a group of young girls joining a meeting of older women, all of whom are contract labour working in cotton fields of Telangana. The older Dalit women’s collective allows women from across villages to raise issues of domestic violence, improved wages and education. Seeing them, the younger girls are inspired to create a collective of their own, and the first fight they take on is for reasonable working hours—8 instead of 12—and the right age for labour—14 and not a day younger. They win on both counts.

Solutions offered by the government fall within a patriarchal perspective of marriage, childbirth and economic productivity. The 2015 research study, for instance, cites the ministry of women and child development’s Sabla scheme for empowering girls aged 11–18, which incorporates a module for training adolescent girls on “issues pertaining to home maintenance, budgeting, saving, running the household, gender sensitivity, schooling of children, etc. (Adolescent girls) will be advised on these issues to orient them to become more productive members of society."

This paradigm renders the work that adolescent and teenage girls do at home—domestic chores, fetching water, taking care of younger siblings—as unproductive labour. But, as the graphic novel, and Ijlal’s recorded conversations reveal, it’s only when girls come together and talk, or create collectives to fight their battles, that their reality is completely understood and change at the individual level possible.

For a copy of the graphic novel, and to view the installation, write to sadbhavana.lucknow@gmail.com