Home / Mint-lounge / Features /  Gokarna, Karnataka | A pocketful of sand
Back
Share Via

Gokarna, Karnataka | A pocketful of sand

In this seaside idyll, seclusion, religion and pleasure come together

On New Year’s Eve, when half the subcontinent flocks to Goa, my friends and I settled instead for Gokarna, a quieter affair just 130km south. We hopped into a car and drove 500-odd kilometres from Bangalore.

The road to Gokarna is dotted with delights: Sunflowers nod along National Highway 4, windmills do cartwheels on the hills of Chitradurga, towel-turbaned farmhands thresh rice on the highway to Shimoga and pines line the tummy-torturing hairpins to Honnavar. The road thereon smells of the sea, and becomes a straightforward ride through Kumta, and on to the Gokarna-Kudle Road.

Gokarna means the cow’s ear. Legend has it that the Hindu god Shiva, after being banished by Brahma from Kailasa, returned from hell through the ear of a cow. This is the lore that has been incanted to name the abode of Shiva’s Atma Linga. How his Atma Linga came to be here is another fascinating tale. Ardent Shiva devotee Ravana was taking the form of Shiva, his Atma Linga, to Lanka. Other gods worried it would make Ravana too powerful. So Vishnu orchestrated a sundown, forcing the pious Ravana to perform his evening rituals. Ganesha appeared as a boy and offered to hold aloft the Linga while Ravana bathed. Once Ravana was out of sight, Ganesha firmly lodged the Atma Linga at Gokarna, thus preventing Ravana from taking it to Lanka.

Set in the Uttara Kannada district of Karnataka, Gokarna lies in the shadow of the Western Ghats where the hills embrace the Arabian Sea. Gokarna town, with its Mahabaleshwara temple (housing the Atma Linga), opens up to the main Gokarna beach: a mess of fish hawkers, empty chips packets, and boatmen offering to take you everywhere. 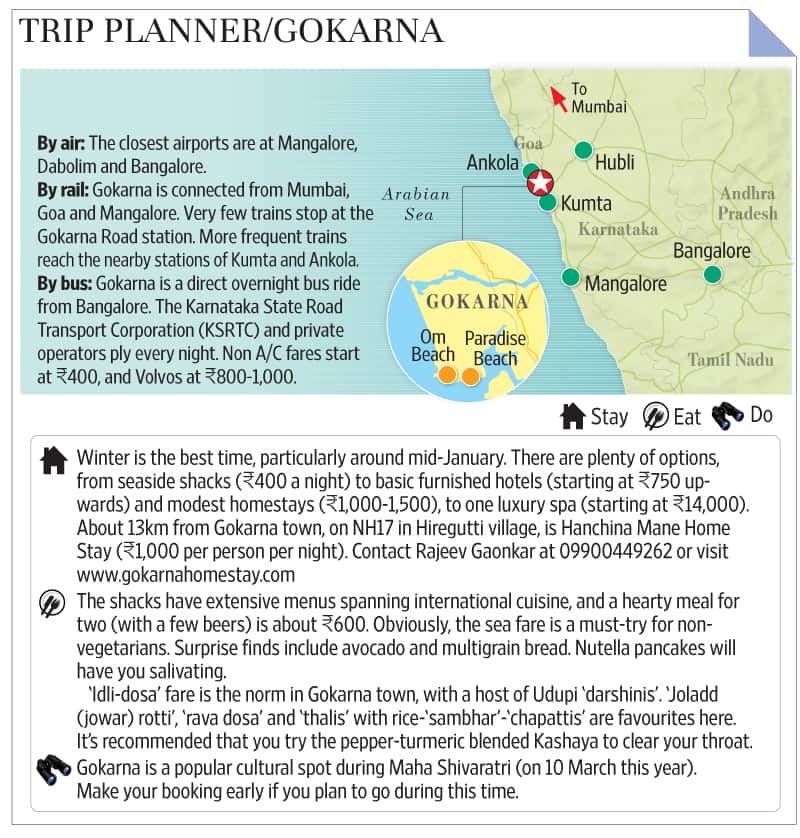 Heads filled with images of perspiring cocktails with tiny umbrellas, we reached our homestay just after sundown. Rajeev Gaonkar, ex-techie turned host, opened his hanchina mane, or traditional slat-roofed home, to us. A tea and a bath later, we sought Paradise.

Gokarna is a place where street lights, road signs and GPS systems stop working by night. The Great Bear howled and Polaris laughed at how lost we were. Several wrong turns finally brought us to, wait for it, a traffic jam. A barely motorable road, tucked away in the folds of a hillside most often populated by cows, was today full of tempos and party-goers. We parked and using our flashlights, stumbled and tripped our way to Paradise, where disappointment awaited.

The authorities had banned alcohol that night and there was no Thailand-like jamboree. The shacks were playing nondescript music and tourists made civil conversation. On New Year’s Eve, this was eerie.

I cannot fathom why the Om, Half Moon and Paradise beaches are bigger hits than the Kudle beach. Perhaps it’s because Kudle is easier to reach. Or that it offers fewer things to do. These seemed like the factors that make Kudle an unparalleled beach-bum joint. So we drove along a winding off-road with moody hill vegetation, parked and settled on the sand to turn at least five shades browner than our driver’s-licence photos.

The sea at Kudle is shallow enough for a person who thinks she can swim (me), and swollen enough for everyone else. My routine was simple: Whip up an appetite with some serious splashing, and polish off a Nutella pancake after. What Maggi is to Ladakh, Nutella pancakes are to Gokarna. The non-vegetarians reported that they were considering living entirely on calamari rings and prawn chilli. When not stuffing my face, I found that Kudle is an autonomous adventurer’s sweet spot. On one day, I chose to sit on the beach, read and get distracted by everything and do nothing. On another, I decided to stroll into Gokarna town.

Gokarna town is a little knot in the hills; a spiritual light; a decadent blackhole. Here, dreadlocked sadhus rubbed shoulders with pot-addled god-hunters and the Sabarimala-chaste. The procession ratha, or chariot, sat outside the Mahabaleshwara temple awaiting Shivaratri for hundreds to draw its ropes, while rented two-wheelers snaked through sneaky narrow roads. Bangaloreans ate rice with spoons, and the Caucasians wore tilaks and ate joladd (jowar) rotti with their hands. Shops sold bongs and Om-printed bags. Graffiti of a pop sadhu, captioned “Videshi Sadhu", begged to be a Facebook upload. I was offered a permanent tattoo, cheap yoga pants, and some “good stuff".

The nights crackled with bonfires. Once they were out, the stars burned with ferocity. We sat in bare shacks of just chairs, tables and sand, drinking 25 Long Island Iced Teas, outdoing each other in multiplication games. Sometimes, we sat down to play Taboo. Sometimes I read Dave Barry aloud.