Film Review | Paa: A big surprise from Big B

Film Review | Paa: A big surprise from Big B

In its outline, there’s little light in the story of Paa. A couple in love parts ways just when the girl, a medical student, discovers she is pregnant; Auro, the film’s protagonist and its emotional centre, is born out of wedlock and with progeria, a degenerative genetic condition that accelerates a child’s ageing process; the child’s death in his early teens is predestined; the father, whom Auro and his mother have not met since he was born, is an idealistic young politician who is struggling to change a corrupt system. The Paa universe is not exactly bright. A still from Paa

In treatment and characterization, Paa has a certain breeziness and a brand of humour which, although awkward and laboured in parts, tries to remind us that life is worth living even when it sucks. It reaffirms the same positivity canon that many mainstream Hollywood films exploit while depicting disease and death. Francis Ford Coppola’s Jack and Robert Zemeckis’ Forrest Gump are just two examples. In Paa, there are no ugly, tragic moments. Auro is a happy, normal child—sometimes too grown-up and wise for his age (he has some tacky I-know-it-all lines about India and life in general). There’s no prejudice against him because of his disability (except one incident in school which is shown in flashback). Can a child with the knowledge of his imminent death be so zen? Can children around him in school be so accepting? I was unconvinced.

However, Amitabh Bachchan’s performance—he plays the 13-year-old Auro, son of Vidya (Vidya Balan) and Amol Arte (Abhishek Bachchan)—lifts the unremarkable script. There are no intricacies or subplots; and no surprises either—pretty much everything that happens in the story is established in the beginning.

Despite my discomfort at the “happy" feel of the film, I got that sigh-inducing uplift during some moments (like when Auro realizes he has a father). Amitabh Bachchan is in character throughout—the character’s impact is not just about great prosthetic make-up and fabricated contortions and body movements. It’s Bachchan’s ability to internalize the moods and impulses of a child with a debilitating disease. Few actors in the Hindi film industry have the courage and commitment to push boundaries. Bachchan Sr obviously immersed himself in preparation for this role, and that kind of ambition and drive is admirable. 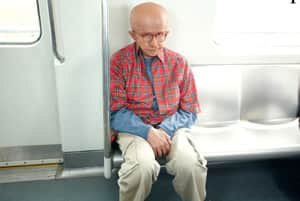 But despite the good, Paa should just have been Auro’s story; it should have been a story more deeply committed to the child—and other children like him—and his unique condition.

Paa released in theatres on Friday.