At one point in Tilottoma Misra’s Swarnalata, the parents of the eponymous heroine attempt to make a match for her with Rabindranath Tagore. The youthful poet, who has seen the attractive young girl from Assam—now in Calcutta to study—after a performance of his musical Balmiki Protibha, seems willing. But his father, the formidable Maharshi Devendranath Tagore, nixes the alliance.

Of course, history would have changed had Tagore Senior not taken this step. But Misra cleverly weaves the central skein of her novel into this one attention-grabbing incident. Swarnalata’s Brahmo parents, Gunabhiram and Bishnupriya Barua, are almost heartbroken at the rejection, which is explained to them in the novel by another real-life Brahmo elder, Sivanath Sastri, with these words: The rejection, surmise the Baruas of Nagaon, a small town in Assam, stems from Gunabhiram’s decision to flout the conventions of Hindu Assamese society and marry Bishnupriya, a widow with two children. Gunabhiram’s act is congruent with the values of the Brahmo Samaj, which broke away from Hinduism to speak up and act for liberal thinking, for equality between the genders, and for Western-style education. But it still does not earn him the right to metaphorically sup at the table of the orthodoxy. In this contradiction are sublimated all the other conflicts that Misra depicts in her unhurried, sprawling and socially realistic novel named after the young woman whose life it traces from childhood to motherhood and beyond against the backdrop of change in late 19th century Assam.

Change is indeed palpable in the placid, hill-encircled land of Assam as nationalist sentiments emerge among a handful of revolutionary young men willing to defy the deep-rooted Brahmin servility to authority in general and to the British in particular. Meanwhile, Christian missionaries spread the gospel and offer the opportunity of education to people systematically deprived of it, in the process gaining converts. Then there are the Brahmos like Barua, intent on asserting equal rights for women and widows.

Misra brings each of these narratives of tension to a boil on a slow fire, charting the stories of representative characters. Here’s Swarnalata—daughter of privileged, enlightened parents, but still subject to the same biases as other women, which she must overcome in her own way. And here are her friends—Lakhi, a child-widow and daughter of a conflicted father caught between tradition and progress, and Tora, converted to Christianity and with a mind of her own. 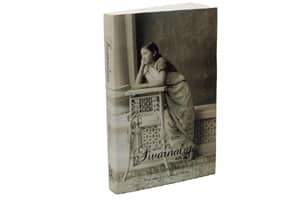 Circling these women—each pushed by personal circumstances that are symbols of the larger societal truth—are a handful of enlightened men who are eager to break laws that they identify as stultifying and demeaning. Chief among them is Dharmakanta, fiery of mind and spirit and contemptuous of convention. His determination to change the status quo is both inspiring and heartbreaking in its intensity.

Misra does not peer deeply within the minds of her characters. Instead, her concerns are with the battles waged between the individual spirit and societal suppression, where every person is powered by dreams and desires that constitute a reaction to the world they inhabit. Like the Brahmaputra flooding its banks, curving around obstacles and pushing on slowly but relentlessly, this novel too meanders, but always with the intent of reaching its end.

Although old-fashioned in its technique and lacking dramatic highs and punctuated cadences, the story shines out through a translation ranging between the competent and the ill-at-ease. In capturing the collective aspiration of a people from a part of India whose literature is unjustly under-circulated, Swarnalata becomes a rich panel in the patchwork quilt that is contemporary Indian fiction.

Three women in search of freedom