Thanks for Visiting Mint
You seem to have an Ad Blocker on. Please turn it off in order to continue, or whitelist Mint
HOW TO TURN OFF AD BLOCKER
OR
REFRESH IF YOU ALREADY TURNED OFF THE AD BLOCKER
Home > >A first for India

A first for India

Jeev Milkha Singh has now played all four rounds of the four majors, another personal milestone

I look out of the hotel room window and the picture before me brings out a smile. A sparkling blue sky and everything below it still and silent, bathed in golden light. Not a fluttering leaf. This was a gift. What a perfect day for links golf!

In fact, the favourable conditions have me heading out to the waiting car in my T-shirt. I don’t bother with another layer of clothing. Don’t need to. It’s about an hour’s drive to Royal Portrush, Northern Ireland’s golfing gem. Great weather, a golf course considered by many to be among the best in the world. I’m in golfing heaven.

Somewhere along the journey from hotel to course things change, weather-wise. The wind picks up and puffs of cloud roll in from the general direction of the Atlantic but all of that can’t distract me from the sights that unfold before me. As you approach Portrush, the front nine comes into view and it is an eyeful. The undulations of the course end abruptly in craggy limestone cliffs with the ocean fanning out on the one side and the town, from which the course takes its name, plotted out on the other. All happy thoughts, however, come to a screeching halt as I leave my cocoon. 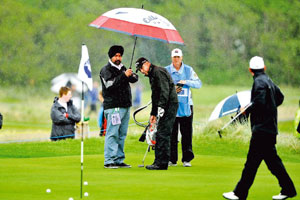 Cold gusts cut into me. I could well have been naked. It takes me a few moments to catch my breath and dive into the pro shop, where I spot warmth in the shape of a Royal Portrush branded sweater. The price tag gives me another bout of the shivers. I curse myself for leaving the hotel without my woollens. My options: freezing to death in a picture-perfect setting vs £150 (around Rs13,149). I go with the latter.

Now clad in designer wool, I actually get off to a good start but by the sixth hole there’s a drizzle and by the next, we have a downpour. By the ninth, the course is hit by a gale and my umbrella flies out of my hand. Had I not sprinted after it, I would have lost my flimsy protection to the elements… A typical day on a links layout, those natural seaside courses on the British Isles where golf was born, and subsequently prospered. Now I’ve read reports where the French stake claim to discovering the game. Tight Spandex pants as against the free-flowing movement of the kilts. I say the Scots were better equipped to give birth to golf.

Cut to the 141st British Open at Royal Lytham and St Annes on the Lancashire coast, from 19-22 July. For starters, Jeev Milkha Singh and Anirban Lahiri had no clothing issues, both having been well taken care of by their sponsors. Suitably attired according to modern-day golfing custom, the men went out and impressed. In fact, two Indians in the weekend rounds of a major is a first for golf in India. Singh has now played all four rounds of the four majors, another personal milestone.

Singh, coming off an impressive win at the Scottish Open the week before where he beat world No. 24 Francesco Molinari in a play-off, started well. That win got him a ticket to the British Open and the fact that he’d had little time to get to know the venue actually helped. “I take it in a way that if you play a lot of practice rounds, you see a lot of trouble. So you might as well not see it… you might as well just tee it up straight and see the good and go for it. Sometimes it works for me, sometimes it doesn’t. I’m still happy. I think it worked for me, and I’m going to do the same most of the time," says the 40-year-old, looking to get back into the world top 50. The reasoning makes sense on a golf course with over 200 bunkers.

Lahiri, 25, playing his first major, showed better form. He made the halfway cut comfortably and then celebrated on Day 3 with a hole-in-one on the ninth, the only one of the event. His father, a doctor in the army, has kept the golf ball. “I don’t think anybody can take that (ball) away from him," says Lahiri, laughing. “He’s thinking right now what he can do with it. Let’s see how creative he is." It’ll be hard to match what the youngster did with his nine iron.

“I won’t be intimidated any more. If I can come here and hold my ground, I can hold it in any event and any field looking into the future," says Lahiri, who got to the Open through the Asian qualifier. “I am so much richer from the experience and confidence that I have gained. I feel I’ve gained a lot of respect from the players. I can rate my game a bit higher now than when I came here initially."

And he can take on the wind and rain too.