In what visually arresting way is Alfred Hitchcock’s masterpiece Vertigo indebted to a 72-year-old sporting event?

This week we shall tackle our question with a little discussion on “Dolly Zooms". Now, I can see some of you readers already nodding your heads in recognition. But no. Dolly Zooms is not an exotic dancer (though it is a superbly apt name).

The Dolly Zoom is, in fact, a technique in motion picture photography that uses a combination of both camera movement and zoom action to create a surreal and often disconcerting visual effect. 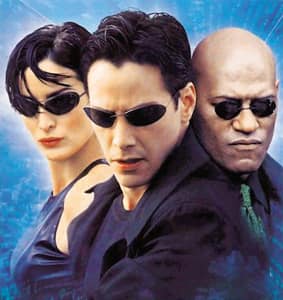 Logging in: Dolly Zooms sucked viewers into the emotional turmoil and unravelling mystery of the Matrix universe.

Remember that scene towards the end of The Matrix? I am referring to the first part of the trilogy, of course — before the Wachowski brothers decided to rework Parts 2 and 3 with the aid of increased substance abuse.

Well, at the exact point when Keanu Reeves returns from the dead, realizes that he is the One and stops the bullets, you notice his size with respect to the background changes a little. It’s as if Reeves suddenly grows in size and the viewer is moving towards him at the same time.

This technique, called the Dolly Zoom, is effective because the changing perspectives but constant size of the character are deeply unsettling to the human eye.

How this is done is ingenious and simple. The trick is to zoom into, or out of, the subject while moving the camera itself in the opposite direction, thereby keeping your subject at a constant size. The background scenes, on the other hand, begin to fall away and this creates confusion in the audience’s mind much like actor Harman Baweja does.

The first widely appreciated use of the Dolly Zoom was by Alfred Hitchcock in Vertigo, when it was used to create a dizzying feeling. Since then the Dolly Zoom, or “Hitchcock Zoom" according to some, has been used by a number of film-makers, including Steven Spielberg in Jaws and Martin Scorsese in Goodfellas. But the effect itself is indebted to the use of the dolly, or the platform or trolley on which movie cameras are placed and pushed along to follow the heroine as she runs away from Ashutosh Rana or towards Aamir Khan, as the case may be.

The camera-on-a-trolley idea sounds pretty simple, right? Alas! It took many years of film-making before a German lady called Leni Riefenstahl realized that she needed a way to capture athletes in motion for one of her documentary films.

So, when Riefenstahl used a number of cameras on rails set around the running tracks—and even some that went up and down flagpoles to get stunning panorama shots—the world sat up and noticed. “Hey, we could do that too!" they said.

Riefenstahl’s film, Olympia, a comprehensive documentary on the 1936 Berlin Olympics, became a classic. It was the first documentary on the Games and pioneered and popularized many techniques of film-making including extreme close-ups, and the humble “trolley on tracks" that, to this day, is used by film-makers the world over.

Write to Sidin at whatareyousaying@livemint.com