A retrospective of master sculptor and artist Ramkinkar Baij (1906-80), curated by the veteran sculptor K.S. Radhakrishnan. Baij, who studied at Santiniketan, is known for his contribution to modern Indian sculpture. His iconic 1938 work Santhal Family, depicting a mother, father and child from the Santhal tribe and a dog, carrying their few possessions to a new life, was the first public Modernist sculpture in India made with cement cast and laterite pebbles. As a part of this show, at 11am on

11 August, the visual artist Ramesh Chandra will lead an hour-long walk (in Kannada) through the gallery.

The Dreams of Tipu Sultan

The new Sunday dessert menu at Hard Rock Café (HRC) is a tribute to the creations in the fourth season of the TV show MasterChef Australia. The HRC chefs have whipped up creations such as vanilla pannacotta with light cookies and raspberry and chocolate tuile cheesecake. At Shiro too, the kitchen will turn out a selection of dishes seen on the show as a part of their Sunday brunch. The offerings include Otak Otak Kukus (steamed fish mousse in banana leaf) and Hanoi Crisp Parcels (fried rice paper rolls stuffed with a mixture of prawns, crab meat and pork).

Zaffran is offering select dishes this Ramzan. These include varieties of biryani such as ‘raan’, ‘jingha’, chicken and ‘subz handi’. The kebabs include Pasandida Paneer, Tangdi Bazaar, Tandoor ka Nasha, Samundari Khazana. The dishes will be served with ‘baingan ka salan’, ‘raita’, a beverage and Zaffrani ice cream.

A series of Kerala mural painting workshops will be organized by Sujith Kumar, an expert in the field, during the festive season of Onam. Traditional Kerala mural painting uses five colours (panchavarna): yellow, red, green, black and white. The paintings comprise stylized human figures, animals and nature. There will also be three workshops: jewellery-making (15 August), painting on bamboo (11-12 August) and on canvas (17-19 August).

An Exhibition of Sculptures

Artworld is presenting an exhibition of sculptures by Anila Jacob. The artist’s work is an interesting mix of different mediums—brass and wood with cogs and bolts woven into a poetic form. Most of the sculptures in this exhibition are in the figurative style, in welded copper and brass. Prices are from ₹ 5,000-50,000.

This is an exhibition of paintings by Mumbai artist Sanjay N. Raut, whose canvases depict the Brahmin boys of a ‘gurukul’. The works are inspired by the stories the artist heard from his mother about the strict lifestyle and disciplined learning in the ‘gurukul’ system. Though the imagery is illustrative, it has layers of meaning that draw the viewer in. Raut’s paintings have the quality of photo realism. His paintings also explore the themes of gods and goddesses and of stories told in the oral tradition by a mother to her child.

This festival celebrates the 140th birth anniversary of the late Pandit Vishnu Digambar Paluskar, who was instrumental in popularizing Hindustani classical music. The festival is organized by the Gandharva Mahavidyalaya, the school of music that he founded. This year, vocalists Devaki Pandit and Raghunandan Panshikar will bring to the festival the gayaki of their enigmatic guru, Vidushi Kishori Amonkar.

A Hindustani vocal performance by Raghunandan Panshikar, followed by a flute recital by Rajendra Prasanna.

After bhajans (devotional music) by students of the Gandharva

Mahavidyalaya, Devaki Pandit will present a Hindustani vocal recital, followed by a performance on the santoor by Satish Vyas.

The concluding day of the festival will again start with devotional music by Gandharva Mahavidyalaya students, followed by a Hindustani vocal recital by Bhuvanesh Komkali. The closing performance is by Mohan veena exponent Vishwa Mohan Bhatt.

Mohiniattam dancer Vijayalakshmi Shivaji will perform at the IIC.

The film sheds light on the brutal 40-year military regime that operated in a closed country, far from the eyes of the mainstream global media. Risking torture, life in jail, even death, the young members of the Democratic Voice of Burma (DVB) kept up the flow of news from their country to expose the repressive tactics practised by their government—like Joshua, a young video journalist who worked undercover to counter government propaganda. Danish documentarian Anders Østergaard’s film collects footage shot by DVB activists—and tastefully integrated recreations—to recall the events of summer 2007, when a popular uprising threatened to turn into an outright revolution as the Buddhist monks of Rangoon led their people in open protest. This footage, captured on cheap digital cameras by operators who knew they would be imprisoned and tortured if caught, and smuggled out to the DVB’s bases in Bangkok and Copenhagen, is, by its very nature, rough and unprofessional. 1 hour, 24 minutes.

On Saadat Hasan Manto’s birth centenary, Mahmood Farooqui and Danish Husain will present a ‘dastangoi’ tribute to the writer. Dastangoi is the lost form of Urdu storytelling revived by the duo. Husain says Manto introduced a unique satirical style through his fiction and non-fiction writing. The same style echoes in their works, such as the allegorical tale ‘Bant Singh Can Still Sing’ on the Dalit poet and peasant activist of Punjab. They will even use a Manto piece from his satirical collection ‘Siyah Haashiye’, a Partition tale.

Post-Oil City and Cyberabad—Landscape of Surprise

As part of “Germany and India 2011-2012: Infinite Opportunities—City Spaces", there will be a symposium and two exhibitions of photographic panoramas, drawings, maps and essays. Post-Oil City, organized by the Institut für Auslandsbeziehungen (Institute for Foreign Cultural Relations) and curated by ARCH+, a periodical on architecture, urbanism and related fields, attempts to understand technology as a social phenomenon. Cyberabad—Landscape of Surprise, curated by architects and urban researchers Susanne Kohte and Peter Gotsch, investigates the intersections between cities and landscapes as key sites of 21st century urbanism.

Jaywant Naidu, who started learning Hawaiian guitar at the age of 8 from S.N. Mukherjee and later from Mumbai’s Dinesh Kumar Sampat, will perform. He has collaborated with international music groups like French jazz band Sangam and Florida-based jazz trumpeter Charlie Porter.

On stage: Nandikar will present Madhabi on Saturday.

The Indian Council for Cultural Relations (ICCR) will present an evening of rock music by Dalchhut, a popular rock band from Dhaka, Bangladesh. The five-member band, formed by Sanjeev Chowdhury and Bappa Majumdar, will perform its own compositions as well as covers of Eric Clapton, Eagles, Dire Straits, Pink Floyd and others. Their oeuvre includes albums such as Ah, Hridoypur, Aakaashchuri, Jochhnabihar, Tukro Kotha and Aay Amontron.

The Indian Council for Cultural Relations (ICCR) will present the third edition of the Raasrang World Flute Festival. The concert will begin with the local ‘pata banshi’ performance by Mohan Patra and a six-member team from West Bengal. This will be followed by a performance by Dipak Sharma and a six-member team from the North-East playing rare wind instruments like the sutli, peepah and gagona. The main performance of the evening is a solo recital of the Tibetan flute by Grammy Award nominee, player and composer Nawang Khechog from Colorado, US. The finale will see a cultural fusion of different wind instruments.

The Arshinagar Project is a trans-disciplinary performance research collective that organizes Ways of Asking—performances, workshops, demonstrations and talks. On Saturday, the 79th birth anniversary of Polish theatre director Jerzy Grotowski, it’s organizing a series of events. An open-air event, Brishti—An Endless Love, by theatre company Bibhaban will be followed by the presentation of the Jerzy Grotowski Memorial Award to theatre artiste Probir Guha. Guha will deliver the inaugural Jerzy Grotowski Memorial Lecture. The day’s finale will be Shikorer Gaan, a musical recital by Manoranjan Das

Painter Siji R. Krishnan remembers her father in her Mumbai debut, capturing the intimacy of a father-daughter relationship in a series of 10 paintings. The show is based on the 29-year-old painter’s life, and is a cathartic exploration of the memories of her father, who died in 2008. The dark, delicate paintings appear like moments remembered or imagined through the prism of anguished longing. The title refers to Krishnan’s father’s profession; he was an accountant.

With Christopher Nolan’s final film in the Batman trilogy, The Dark Knight Rises, the flavour of the month, the Enlighten Film Society will hold a festival showcasing two early films by the British film-maker—Following and The Prestige. Nolan’s short Doodlebug will also be screened.

Noon. Enlighten Cinema 1.1, Russian Center, Peddar Road. Festival pass,Rs 500, with seating on a first-come, first-served basis. For details, call Ronak Dixit on 9870090105 or visit enlighten. co.in.Those aged 18 and above can attend the festival.

The acoustic folk rock band from Mumbai, featuring Uday Benegal on vocals, Mahesh Tinaikar on guitar and Sankarshan Kini on mandolin, violin and percussion and Ashwin Andrew on drums, will perform. Zubin Balaporia, also an ex-Indus Creed member, will jam with the band. 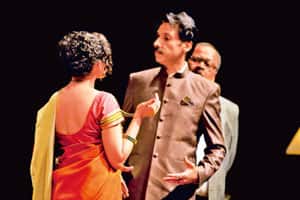 Clash of two worlds: The Bureaucrat.