This talk by Salima Hashmi, artist, writer, activist and professor at the Beaconhouse National University, Pakistan, will be followed by a presentation titled “My journey as a witness: An insight into the evolution of contemporary photography" by Bangladeshi writer and artist Shahidul Alam.

Listening to Life—The Journey of a Raga 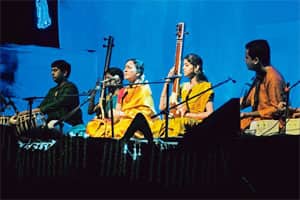 On song: Bombay Jayashri (left) will perform at the Listening to Life concert.

Piip And Tuut At Concert

Devised and performed by Haide Männamäe and Toomas Tross as two clowns in the play about two janitors, Piip and Tuut, who tidy a stage for concerts every evening. One evening they decide to watch a performance themselves, and realize they have left their cleaning supplies on stage. What unfolds is a series of comic events as they try and retrieve their supplies, and salvage the show. For children aged 3 and above. 55 minutes.

Presented by Mumbai’s Akvarious Productions, the comedy revolves around the protagonist, Paramjit Singh Duggal (aka Pammi aka Doggie aka Parmeetay), who has several problems bigger than his “pet names"—his mother wants grandchildren, his

The Banashankari Fine Arts Society is organizing an evening of classical music featuring Ravichandra Kulur on the flute along with H.N. Bhaskar on violin, Anantha R. Krishnan on mridangam and Giridhar Udupa on ghatam.

In this day-long workshop, children in the 8-12 age group will get to experiment with clay and create their own pottery.

Death Knocks comprises three short plays: Deadly Visitor, Ghost Busters and Heaven’s Waiting Room. Deadly Visitor is about an old man, Nat Ackerman, who is shocked to meet death. Ghost Busters has Mr and Mrs Swamy, who run Ghost Busters Inc., dealing with their latest case—driving away the spirits from the Reddys’ old, haunted, bungalow. In Heaven’s Waiting Room, Martin Dexter breaks up with his girlfriend, falls to death and finds himself in the waiting room, with the possibility of meeting the devil imminent.

Artist M. Siva, who did his postgraduation from Chennai’s Government College of Arts and Crafts in 2002, works with mixed media, using paint, oil, acrylic, charcoal and clay. The themes of anxiety and insecurity find expression in his paintings and installations—the brooding imagery of his works has a colourful, postmodern overtone as Siva absorbs and assimilates elements from the world around.

Until recently, magicians generally dressed like over-the-top maharajas—bejewelled turbans, shiny kurta-churidars and glittering jutis, like the legendary P.C. Sorcar Senior and his son P.C. Sorcar Junior. This show by Mumbai-based Tejas Malode, however, emerges out of a more contemporary fantasy world: Bollywood. Malode won the title of India’s Magic Star show on Star One in 2010, defeating Sooraj Singh of Kolkata to win the cash prize of ₹ 10 lakh. The 25-year-old banking and insurance graduate was behind Hrithik Roshan’s performance as a magician in the film Guzaarish and has won the National Award twice.

The annual Monsoon Festival organized by Delhi-based Red Earth is in its seventh year, and promises a quick capsule full of ‘saawan’ freshness. The main attraction will be the Teej Design Mela, where you can henna your hands, groove to semi-skank Bollywood music dedicated to the rains, and other activities such as buying tiny kites and admiring art. This year, organizer Himanshu Verma has planned an evening of “multilingual poetry, songs and stories" called ‘Baarish’, a site-specific sound installation, ‘Digital Malhar’, by Ameet Singh, and “Subz Neel Bhraman: The Blue-Green Walk", around Nizamuddin.

The world in French artist Philippe Ramette’s gravity-defying photographs is almost always topsy-turvy. At first, they remind you of the digitally altered images of improbable sights and situations that are circulated

endlessly on the Internet. A man in a black suit walks on a tree trunk in one, on the surface of the sea in another, and smokes in a third, while lying horizontally on what appears to be thin air, with only his feet resting casually on a desk. These feats, however, haven’t been achieved through Photoshop. Instead, they have been carefully conceptualized, engineered and performed by Ramette himself, without any retouching or editing of photographs. There will be panel discussions, exhibitions and a retrospective, but the area of programming most likely to generate debate is the “The Freedom of Creative Expression" showcase. This includes Chitrangada —The Crowning Wish by Rituparno Ghosh, the story of a dancer who wanted to become a choreographer but studied engineering to fulfil his father’s dream; and Pier Paolo Pasolini’s Salò, the perennially divisive 1971 film that sets Marquis de Sade’s 120 Days of Sodom in a Nazi pleasure house.

Jafar Panahi and Mojtaba Mirtahmasb’s This Is Not a Film will be screened too. The Iranian film was shot on the sly and then smuggled out of the country to last year’s Cannes Film Festival on a flash drive hidden inside a cake. This screening, possibly the first official one in India, is being done to show solidarity with Panahi and his fellow director Mohammad Rasoulof, who is also facing persecution by the Iranian authorities.

First-time director Kenny Basumatary, inspired by low-budget debuts like Peter Jackson’s Bad Taste and Robert Rodriguez’s El Mariachi, as well as by the success of his own no-budget kung fu shorts on YouTube, decided that instead of waiting for financing, he’d just go ahead and make a film with whatever little he could scrape together. The result is Local Kung Fu, at ₹ 95,000 quite possibly the cheapest martial arts movie ever made. The film is set in Basumatary’s home town, Guwahati, and the characters speak Assamese with a smattering of Hindi and English. Charlie, a mutton-averse kung fu exponent, wants to marry his girlfriend Sumi. As fate would have it, this involves battling the local don in order to win her uncle’s heart.

In recent years, bandhs—protests that close down markets or highways—have become so common in Nepal that there’s a website (www.nepalbandh.com) that offers a bandh schedule for the month. In his first full-length feature Highway, Deepak Rauniyar uses bandh as a motif to mirror modern Nepalese society. A bus load of strangers travelling from eastern Nepal to Kathmandu face a series of stoppages. In a Kaurismäkian twist, the travellers pretend to be a marriage party in order to get through the blockades quicker.

This Is Not a Film

Iranian writer-director Jafar Panahi, issued a six-year prison term and banned from making movies for two decades, shot this profound feature clandestinely in his own apartment while he awaited sentencing. It plays like a “day-in-the-life" documentary: Panahi talks with his lawyer, feeds his family’s scene-stealing pet iguana and acts out sequences from a never-realized script. But there are clues throughout—especially during a humorous interlude with a neighbour’s dog, as well as a brilliantly extended set piece focused on the building’s garbage collector.

After his suffering wife breaks his prized violin out of frustration, the talented Nasser Ali Khan (Mathieu Amalric)—father of two and victim of a disastrous first love in this film set in Tehran in 1958—gradually becomes suicidal as he struggles to replace the broken instrument. He is unable to find a replacement, and life without music seems intolerable. He stays in bed, wasting away, and slips into reveries about his youth and his children’s future.

Smirnoff Next, a live music platform, will host B.R.E.E.D aka DJ Nasha at The Park’s Kismet pub. B.R.E.E.D, a two-time DMC World DJ champion (India), will mix commercial as well as electronic dance music. He has performed at music festivals like Burning Man (US), Sunburn (Asia), and Global Groove (India).

The Power of Community: How Cuba survived peak oil

When the Soviet Union collapsed in 1991, Cuba’s economy went into a tailspin—with oil imports cut by more than half and food imports by 80%. This film tells of Cuba’s transition from large farms and reliance on pesticides and fertilizers, to small organic farms and urban gardens. This 2006 documentary film was inspired when film-makers Faith Morgan and Pat Murphy took a trip to Cuba in August 2003.

The US consulate general, Hyderabad, and Wajood, an organization for LGBTs (lesbian, gay, bisexual and transgender) are presenting a festival to celebrate LGBT pride month in India and the US.

Kolkata-born Viraag Desai graduated from the School of the Art Institute of Chicago, US, in 2005. A year later, he moved back to Kolkata and started his studio, where he paints, designs and curates. He experiments with traditional art forms like Tibetan thangkas and Bengal’s patachitra. This is his first solo show of work done over the past three years, where he has used spray guns, acrylic, polyurethane gel and local pigments.

Weavers Studio Centre for the Arts will present a musical evening to celebrate 60 years of musician Pandit Monoj Shankar’s career. Pandit Shankar is one of the acclaimed exponents of the Maihar gharana. The evening will witness a sitar recital by Shankar accompanied by Partha Bose and Sandip Banerjee on the tabla.

The Indian Council for Cultural Relations (ICCR) will present a concert where folk traditions from the world fuse into one sound. This ensemble concert will feature internationally renowned musicians Pandit Shubhendra Rao on sitar, Saskia Rao-de Haas on cello and Biplab Bhattacharya on tabla.

Theatre group Sayak will present Bengali play Pinki Buli, written by Indrashis Lahiri and directed and enacted by Meghnad Bhattacharya. The story revolves around two girls, Pinki and Buli. Buli is from a remote village and works as a domestic help at quintessential urban teenager Pinki’s house. While Pinki goes to a convent school, Buli babysits Pinki’s brother. It is a story about two different lives—their wishes, dreams, pain, conflict and trials.

In this first exhibition in India, 15 of Scottish artist David Shrigley’s drawings are being displayed. For two decades, Shrigley has been producing rudimentary line drawings—cartoons or works of art—that comment on the human condition. His works are often humorous and range from signature scratchy, loose-leaf drawings to surreal photos, even the occasional taxidermic object— such as a dog waving a placard that says: “I’m Dead". Some of his tragicomic artworks and sketches hold a sardonic mirror to his everyday thoughts. One such refrain: “What does your future hold? Arthritis."

urban discontent gets a fresh coat of paint in director-actor Lillete Dubey’s Hindi production about a nuclear family that crumbles around its breadwinner, Savitri. As Savitri—who seeks emotional and sexual emancipation from her marriage—wrangles with her unemployed husband Mahendranath, their three children feel alienated and find their own outlets for rebellion. 1 hour, 45 minutes.

Spot the different varieties of insects, frogs, reptiles and plants that emerge during the monsoon at the Bombay Natural History Society (BNHS) nature reserve. The programme will include sessions on rainwater harvesting and rainforest preservation. There will be nature trails and face painting, and breakfast will be served.

Film-maker Nidhi Tuli’s The Saroj Khan Story follows the terpsichorean journey of one of the finest choreographers in the Hindi film industry. Tuli weaves together interviews with the dancer-choreographer, archival footage from her background dancing days, and clips from her iconic songs. Khan is forthright as she remembers her hardscrabble childhood and her equally tough adulthood.

Film-maker Miriam Chandy Menacherry’s documentary on the rat killers of Mumbai follows the efforts of Behram Harda, a municipal corporation employee, and his underpaid squad who have been keeping order on the city’s streets for over 35 years, with a record of the 2.8 million rats killed. Menacherry had to overcome her horror of rodents to shoot for the film that features men, many of them well educated, who prowl the streets of Mumbai night after night to slay the rodents with wooden sticks.