The East Kolkata Wetlands, a Ramsar site, have lost ground over the yearsand new threats are now surfacing

The raucous call of the majestic Pallas’s Fish Eagle no longer rings through the 12,500-hectare wetland that hugs the eastern fringe of Kolkata. Habitat degradation has taken its toll.

The large flocks of migratory water birds, which would use the wetland in winter, have become rarer. The tall trees that used to be home to the Pallas’s Fish Eagle are gone. The Brahminy Kite and Eurasian Marsh Harrier, too, have stopped coming. The vegetation that once provided roosting sites to birds like wagtails and pipits has suffered too.

The unique ecosystem of the East Kolkata Wetlands (EKW), designated a Ramsar site under an international conservation convention since 2002, is under threat from rapid urbanization.

Now, it seems, the Kolkata municipal corporation (KMC) is exploring the possibility of using a part of the wetland as a solid-waste dump. It needs a new site; the old dumping ground of Dhapa cannot take more garbage. A 10 June Times Of India report quoted Kolkata mayor Sovan Chatterjee, who is also the state’s environment minister, as saying development projects are “as important to the city as environment conservation". He added: “One cannot ignore the legitimate requirements of a city and blindly follow environmental restrictions because someone decided to go to an international body with the wetland map and get a huge chunk of land demarcated for protection."

On Thursday, conservationists met Chatterjee to stress the importance of protecting the EKW.

This is not the only threat to the EKW. There is another, real threat from encroachers. Over the years, patches of the wetland have been encroached upon, and the process continues.

Through all this, the EKW has continued to provide invaluable ecosystem services for one of the country’s most populous cities—and for a community of around 100,000 that ekes out a living through sustainable aquaculture and agriculture.

The East Kolkata Wetlands Management Authority, a government body, states: “The EKW nurtures the world’s largest wastewater-fed aquaculture system. Sewage that is sent to the wetlands is subjected to solar purification followed by natural oxidation, by which the water becomes conducive for algal and plankton growth, which are the primary food of fishes. The goods and services provided by the EKW include, in addition to fisheries, a very cheap, efficient and eco-friendly system of sewer treatment for the city of Kolkata, a habitat for waterfowl and a home for a large number of flora and fauna. However, because of increasing pressure of urbanization, change in the quality and quantity of the solid waste and sewage, as also human neglect, this Ramsar site is under threat."

The East Kolkata (Conservation and Management) Act states: “The wetland acts as regulator of water regime, source for underground water recharging, mechanism for wastewater treatment, air quality purifier and store of water for fire-fighting and has great ecological significance for human life."

So, the wetland doesn’t act only as a natural effluent management plant, it also absorbs excess water during the monsoon, saving the city from severe waterlogging. And the water that flows out, cleaned of its pollutants, feeds the water channels in the Sunderbans, the world’s largest mangrove forest and a World Heritage site.

Now, however, new threats are surfacing. Farmers have complained that water levels are not being maintained in the EKW by government agencies, and this is affecting aquaculture and farming. Local non-profits and conservationists have approached the eastern bench of the National Green Tribunal, which has directed the irrigation department to file a status report. A hearing is scheduled in August.

Further erosion of this wetland may well jeopardize the city’s future. Like Chennai, which bore the brunt of floods last November after heavy rain. Chennai’s wetlands, too, once used to absorb the floodwaters.

Kushal Mookherjee is an author and former member of National Board for Wildlife, ministry of environment, forests and climate change. A stalled project near Captain’s Bheri. Rapid urbanization encroaches and cuts off wetlands. Land is being reclaimed for road widening and other purposes. The new housing projects that have come up recently, some of them reclaimed land adjoining the East Kolkata Wetlands. 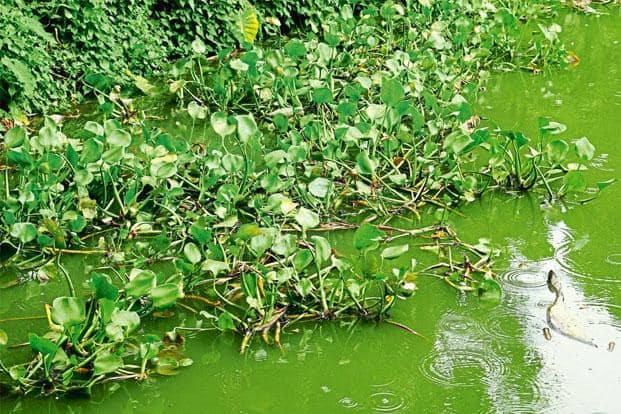 Water hyacinth in Nuner Bheri, part of the wetland area.