We’ve spent as much time playing the online game World of Warcraft as we’ve spent evolving as a species.

It’s true. Add up the hours that nearly 12 million gamers worldwide have spent in the game since its 2004 launch, and you get about 50 billion hours—six million years of time.

For most people, this would be a terrifying statistic, one that signals an alarming waste of human productivity and energy. Indeed, many books in the last year (among them Jaron Lanier’s You Are Not a Gadget, Nicholas Carr’s The Shallows and Sherry Turkle’s Alone Together) have drawn attention to and criticized the collective time sink of the Internet, and its impact on our psychological selves. We’re more self-obsessed, they argue. Expecting less from real relationships and more from technology. Escaping into worlds that bear little relevance to our lives. 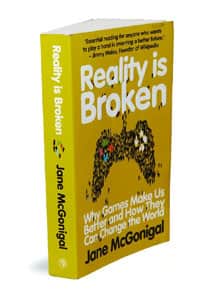 Reality is Broken—Why Games Make Us Better and How They Can Change the world: Jonathan Cape, 300 pages, ₹ 99.

When taken out of context, that line may sound a bit hokey—but Reality is Broken never descends to fluff. It occasionally falls victim to extensive bullet-pointing, but however much you may disagree with McGonigal’s conclusions on the power of video games, the book stays grounded in solid, verifiable research.

McGonigal tackles the question of what exactly games do that makes them so compelling. She draws on experiments from the last decade into positive psychology to show how games help us optimally channel involvement and “blissful productivity" in the way they structure experience.

There are some fantastic chapters that break down the psychological specificities of uniquely video-game experiences. We learn, for example, how an “epic win’"(online slang for an unexpectedly awesome turn of events) strengthens collective involvement in a daunting task. Or how a “pwnage" (gamer slang used when gloating about a victory) creates a complex social effect around “playful postures of superiority".

The book’s relentless optimism about the place of games in our society is both its biggest strength and flaw. At times it reads like a manifesto, one that’s desperately legitimising the experiences of millions of gamers worldwide who feel that the games they love are a meaningless waste of time. On the other hand, it’s a call to arms for designers to see the medium in a new light, and look beyond the obvious when creating them.

The book is easily one of the best written about the medium to date. It’s engaging and detailed, and does not preach to the converted. McGonigal does gloss over some worrying concerns, such as the limited demographic diversity in many online gaming communities, and the often blatant homophobia and misogyny in them. But Reality is Broken is a rarity—a book that treats video games as a medium worthy of respect, and one capable of confronting the biggest issues we face today.