The new life of Harsh Mayar

The new life of Harsh Mayar

Not too many own a television set in the row of brick-and-mortar shanties in Dakshinpuri in south Delhi, where the teenager lives. When Harsh and his parents heard that he had won the National Award for best child actor for his debut in I am Kalam on 19 May, they were oblivious of its importance. A low-budget Hindi film produced by Smile Foundation, an NGO that works on child development, the film has already won more than 12 awards since it premiered at Cannes’ market section last year. But none of these really affected Harsh; he had no reason to think this would be any different. 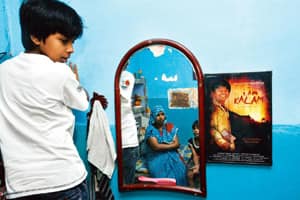 Mirror, mirror: Harsh at his south Delhi home, with his mother and brother.

Harsh’s father Ashok runs a tent contracting service, setting up shamianas (tents) for small functions. Reams of brightly coloured fabric, folding chairs and tables, and assorted paraphernalia for celebrations, lie in a heap outside their home.

The family’s own celebrations have been muted. Ashok has lived in that row of 100 sq. ft plots since he was a child, seen it go from thatched huts to concrete; and he’s afraid to “show off". And as Harsh’s mother, Reeta, says, the neighbours don’t believe a thing anyway. “They think he’s going to come on TV…everyone knows him as a good dancer around here," she says.

In I am Kalam, Harsh plays Chhotu, a boy who waits tables at a dhaba. One day he watches A.P.J Abdul Kalam on television and learns that the former president of India grew up poor too, selling newspapers. “I am Kalam," Chhotu finds himself saying.

Harsh’s own ambitions are comparable with those of the character. He is a bright-eyed 13-year-old (he was 11 when the film was shot) whose dream is to act with Aamir Khan. While his father’s work ensures him meals and an education, his attitude has already catapulted him to a place where a boy from a slum in Dakshinpuri would ordinarily never reach.

Unlike his parents, or his shy nine-year-old brother Chandan, Harsh isn’t quite the model of humility. He is a savvy performer. In the 2 hours we spend with him, he’s sung us a Justin Bieber song (he has 38 songs by him on the cellphone that the family shares). He’s also demonstrated how he wins boxing matches on his new PlayStation—which he bought with his earnings.

Perhaps a marker of an aspiring star, appearances are already important for him. He carried a full-sized suitcase when he went to Amsterdam for three days for the Cinekid film festival in October. He can’t stop talking about the BMW and the Bentleys that ferried him around. His biggest concern these days is what he’ll wear for the film’s premiere in Mumbai in July. “I’ve worn my black suit a couple of times…I’ve asked the uncles at Smile for a grey one this time," he says. Grover has promised to rope in his Bollywood connections. And Harsh has asked Pitobash bhaiya (Pitobash Tripathy, another co-actor) to invite Akshay Kumar, who he is shooting with now. He also wants Rajpal Yadav to attend because he is a “real" actor.

Powerhouse: With Gulshan Grover in a still from the film; and (left) an effervescent portrait of Chhotu.

Grover, who acted pro bono in the Rs2 crore film, says the film was a particularly good fit for Harsh. “His rawness is a precious quality," he says.

Bidhu Bhushan Panda, the casting director, picked Harsh from close to 1,000 children he’d scouted. Panda had seen him playing on the street—the leader of his pack—around April 2009. He made a call to his director: “Kamaal ka Chhotu mil gaya (I’ve found an amazing Chhotu)."

“For child actors, it’s not about method acting as much as it is about disposition," says director Nila Madhab Panda, who’s worked extensively with children. “Harsh is an incredibly street-smart kid…a little too smart at times," he says, referring to the number of tantrums he threw on set. He recalls the toothache Harsh frequently brought up when he didn’t feel like working. His role required him to sit on a camel, which he flatly refused to do midway through the shooting schedule. “He was manipulating us! Gulshanji said he’d handle it. All it took was to let him play with his cellphone for an hour," says Madhab Panda.

Inside the Mayar home, Harsh’s success hangs heavy. A poster of the film is on one wall; a trophy for being the first student from his school to act in a film rests on a shelf. There’s also a PC (personal computer) gifted to him by Madhab Panda, which hasn’t been used because Harsh is yet to get an Internet connection.

“We knew miracles like these happen but we didn’t know it could happen to us," says Reeta. Ashok is so overwhelmed he can barely speak. He breaks down when he says the family spent most of the Rs22,000 advance from the film to conduct a barsi for his father—a ritual on death anniversaries. This was held 16 years later than intended. “My life is closer to Chhotu’s. My father passed away when I was 12 and I had to work to support my mother. I couldn’t finish school," says Ashok. “Today, Harsh has made all of that worthwhile."

The award doesn’t translate into much money. It’s Rs50,000 divided between four winners. But Ashok is crying because he can’t fathom what this award can lead to. “My son was brought up in a slum. But what he has become today is for everyone to see," he says.

Harsh’s family has stakes in this success. It was his maternal uncle, who works in a restaurant in London, who had urged his parents to enrol him in a theatre workshop three years ago. That summer workshop, sponsored by his uncle, is the only training Harsh has had. Reeta used to take him every day for his theatre classes at the Shriram Bharatiya Kala Kendra and wait while they were under way.

Though proud, Reeta is worried about Harsh’s sudden transformation. “He used to be a good student but he’s stopped studying since this film came up," she says. Harsh reassures her that he will finish college but that he has to keep acting alongside. He is paranoid that people will forget him if he “goes away".

Santanu Mishra, one of the founding trustees of the Smile Foundation, is a tad wary too. He recalls how disappointed Harsh was when he wasn’t selected in a recent audition for a Vishal Bhardwaj film. He’s considering arranging some form of counselling to help Harsh cope.

The high point for Harsh, so far, was meeting Kalam before the film went on the floors. He has good memories of the meeting: He complimented the former president on his hairstyle and was told that no one had done that before. Kalam reiterated his message (from the film) to Harsh, the one that changes Chhotu’s life: “Destiny isn’t written but can be made".

I am Kalam will release in theatres across India in the last week of July.