It feels strange to ask guitarist Arsh Sharma about The Circus’ second album on the day the band’s first album is due to be released.

His answer, however, is even stranger. “Our second album is already written," says the architect and frontman of the Delhi band nonchalantly. “We want to go into the studio in about eight months and get it ready." 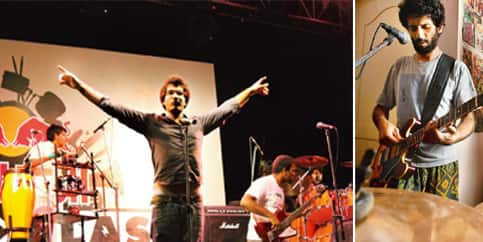 The Circus’s planned launch gig on 14 October was cancelled because of a Delhi-wide shutdown on account of the Commonwealth Games closing ceremony. It was one more setback for an album beset by delays. From Space was finally released on 22 October; it had spent more than a year in limbo as the band unsuccessfully hunted for sponsors to finance the production costs. These failed to materialize even after the band was featured on Channel V’s Launchpad last year and toured India. “We decided to fund the first album ourselves," says Sharma, sounding peeved. “No one’s interested in sponsoring Indian rock. There’s no sustenance in the scene. It’s all bull****."

Meanwhile, undaunted, The Circus continued writing, and have charted out a second album—which Sharma describes as “harder, more progressive and more self-indulgent".

A shift in mindset seems to affect Indian bands once their first album is out. The follow-up creates an interesting set of challenges—throwing up conflicts in songwriting and finance that the rush of getting your first album out successfully masks.

The first album makes your band seem legitimate, but it’s the second that gives it a recognizable creative arc. The history of Indian rock is full of telling examples. Mumbai giants Pentagram’s second album Up (released in 2002) introduced an electronic edge to their sound that went on to define the band’s identity, even as it alienated fans of their earlier alternative work. Similarly, Bangalore group Thermal And A Quarter’s (Taaq’s) sophomore effort, Jupiter Café (also released in 2002), remains the band’s signature set of tunes.

“It’s much like what changes after the first wife/child/job/bungee jump," says Taaq’s vocalist Bruce Lee Mani. “You have more knowledge and experience; you’re likely to tread more carefully, but if you’ve had a lot of fun making the first one, you want to push things along a bit more," he says.

Almost all of India’s up-and-coming bands are one album old (some, such as Delhi’s Them Clones, have been at that stage even after a decade of playing together), and “pushing it along" has led to some soul-searching.

Often classified as “indie" groups, these bands draw small audiences, and rely on a tiny vocal fan base (of usually 300-1,000 people) to evangelize their work. Studio time is precious and expensive, so most of them rely on gigs to test their new material. But building a responsive audience can be challenging. Sound set-ups at many venues are dodgy (discouraging complex arrangements) and the money is always tight. Not the ideal set of conditions for bands trying to find their voice.

“There’s no infrastructure to support musical evolution," says Kolkata musician Rohan Ganguli, formerly of The Supersonics. “You struggle like a slave for a couple of years, and the money is pretty pitiful."

The Supersonics, who split up earlier this year over “creative differences", were among India’s most promising rock groups. Their debut album, Maby Baking, was received warmly, and the group had material left over for a follow-up.

“We had so many songs, and we were well on our way to releasing a second album," Ganguli says. “We were moving forward musically, but I guess each of us was moving in a different direction."

Not all second album stories, though, are marked by such difficulties or friction. A number of bands exist in a comfortable space between experimenting and sticking to a successful formula. Take jangly folk rockers Swarathma, for example. The band (the only Indian group to have its own iPhone app) hopes to have its second album ready by early 2011. Swarathma’s self-titled first was recorded layer by layer, instrument by instrument, like most studio albums are. But the band wants to move away from this into a more raw live sound. “We recorded a single—Yeshu Allah aur Krishna—about a year back for the British Council’s Soundpad project and that we did live," says violinist Sanjeev Nayak. “For our second, we want to record all the songs this way."

Mumbai jam band Something Relevant is going in the opposite direction. The band’s debut, Feels Good 2B Live, was recorded live, without overdubs, in a studio. For their follow-up, they want to go layer by layer, instrument by instrument. “We hope to start recording in December," says guitarist Tanmoy Bhattacharjee. “The songs sound completely fresh, we’ve simplified our sound quite a bit." Just back from performing at the Edinburgh Festival Fringe, the band has been previewing new material on its website.

For other bands, such as Bangalore’s Lounge Piranha or Malayalam rockers Avial, the second album has forced a rethink. Avial previewed very little in the way of new songs after the departure of vocalist Anand Raj Benjamin Paul in 2009, but have recently begun opening their shows with a fresh track called Ayyo.

For Lounge Piranha, the departure of bassist Rohan Ramesh after their debut Going Nowhere led to a strange situation. “After Rohan left, we continued to write music— with George, Kamal and me playing as a trio, without bass. It was strange, but very quickly we learned to play our instruments differently and started seeing it as an interesting musical idea," says vocalist Abhijeet Tambe. “The sound is a total breakaway from Going Nowhere." Shalini Mohan supports the band on bass, but the first 30-40 minutes of a Lounge Piranha show sees them playing this new material as a trio, with Mohan joining in for a second half that covers their older material.

Lounge Piranha want to bring in a producer to help make their second album more “conceptually concrete", but are also dabbling in recreating the fuzzy ambience of their cramped jam space in Bangalore. “Maybe we’ll go super low tech. Make a grungy, lo-fidelity album. That would be nice."

For all these bands, albums contribute very little to their finances, and serve mostly as markers—a portfolio of what they represent at a particular point in time. Sometimes, the delays associated with getting it recorded make even that advantage redundant. “Our third and fourth albums actually didn’t exactly represent our ‘current’ sound," says Taaq’s Mani. “We were so determined to get the best possible quality for the mix that the albums, when they finally made it to the market, were already ‘old material’."

So, in today’s age of free Web downloads, why is the full-length album still important? “Going by the rule of thumb that a lot of your fans are like yourself, we believe these folks are the kind of listeners that like albums," says Mani. “I like the concept of hearing a suite of songs arranged by one artiste with some deeper objective."

“It does such a fantastic job of promoting your stuff," says Tambe. “Fans will listen to songs 30 times before coming to a show." He reckons it was their debut album that kept them alive during their six-month hiatus after Ramesh’s departure. “We thought we had to start from square one—who knew where the fans were?"

Their recent “comeback show" at Bangalore’s Alliance Française had the “first eight-nine rows" filled with “complete strangers holding copies of the album, shouting lyrics". Tambe found out they’d purchased the album and became converts. “Small bands know their diehard fans. I didn’t recognize any of these faces."