Just outside Ganesh Haloi’s home in the quaint neighbourhood of Kolkata’s Salt Lake City, the sky portends rain. There is a rustle in the trees as the monsoon-green leaves catch the breeze. Against the darkening northern sky and a mellow sun, they gain glowing outlines. Crows wait on parapets, stray dogs scamper for cover. Men hurry.

How would one of India’s foremost painters—well-regarded as a master of the abstract landscape form—react to the scene? 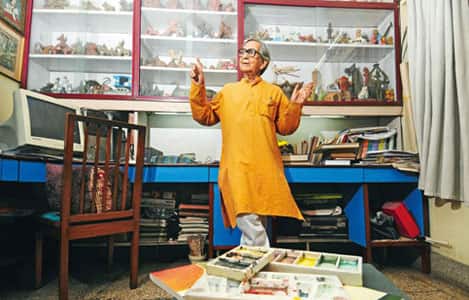 Unreal art: Ganesh Haloi at his Kolkata home, ahead of his show in Mumbai. Photograph by Indranil Bhoumik/Mint

At 75, Haloi has lost none of his artistic vigour, even though age- attendant ailments like recurring back pain have somewhat crippled his daily painting routine. The fact that the artist continues to be occupied by the canvas is apparent from the 28 paintings that will be on display at Mumbai’s Jehangir Art Gallery in the coming week in an exhibition presented by Akar Prakar, Kolkata, and Patrimonio Gallery, Mumbai. The paintings are his recent works, completed between 2007-08, and introduce new visuals from Haloi’s search for minimalism while portraying his lifelong instinct for nature.

In quite a few of the paintings, Haloi moves away from his distinctive blending of colours and tones, relying instead on white, unfettered spaces. The spaciousness that has been inherent in his work is possibly, at the ripe end of an artistic career spanning over half a century, giving way to an unpolluted, pure white. It perhaps extends what art critic Manasij Majumder feels is Haloi’s ability to “transform naturescapes into mindscapes".

Having interacted closely with the artist over the last decade, gallerist Abhijit Lath of Akar Prakar admires Haloi’s willingness to move out of the mould, yet be in it enough to be recognized for his distinguishing style—the “thin line" he continues to tread successfully. “He belongs to a generation of artists who painted for the self and when there was hardly any market for art. For them, there is never any need for additional motivation," says Lath. “After a point, every artist becomes a slave of habit," Haloi continues. “One has to rescue oneself from it. For me, every sunrise and sunset is different from the other."

The earth-coloured kurta Haloi is wearing is a reminder of the matir taan—the magnetic tug of the land—of a home to which he can no longer return. Extraction—as a 14-year-old fatherless boy, Haloi had to escape from his birthplace in Jamalpur in East Pakistan (now Bangladesh) following Partition—and the emotional pain is a reality that has lived with him. But it never quite captured his creative imagination.

It would have been easy for Haloi to lapse into realistic art. His pre-teen life was lived along the Brahmaputra river in Mymen-singh; every monsoon, the bloated river would spill into their village home’s courtyard. Even now, whenever Haloi smells bleaching powder, his mind travels back to when his penniless family was living in the refugee quarters of Cooper’s Camp in West Bengal’s Ranaghat. There, the constant surfacing of emaciated dead bodies in canals and alongside roads would be followed by the antiseptic spraying of bleaching powder by authorities.

It was by dint of his painting—an inclination Haloi picked up as a young boy after watching the artist Biren De at work—that Haloi got admission to Kolkata’s prestigious Government College of Art and Craft. A year after college, Haloi took up an assignment for the Archaeological Survey of India, to copy the Ajanta murals; he describes the time spent doing the copies, 1957-63, as “invaluable years", says Haloi. “I was drowned in an ocean of creativity."

“Having struggled so much, people often wonder why I didn’t become a protest artist," he reacts. “I could never reconcile to the fact that my work on poverty would be sold for millions and allow me to live in comfort. How many protest artists have even opened a clinic?"

Nature in its many abstractions, it can be presumed, has been Haloi’s way of taking flight. In nature, he sees continuity, reuse and regeneration: the mango kernel giving birth to a tree giving birth to a fruit and yet another kernel. “Reality"—and no one can blame Haloi for not wanting to encounter it up close—“can be suffocating."