The secret life of bugs

Pick a small green patch in a city and set off on your own insect safari. You might even discover a new species

The stinkbug skittered around on my hand. Suddenly displaced from the leaf it was using to soak up the fading daylight, it kept making U-turns on my palm, much like me on a cloverleaf highway interchange.

The little red bug’s aimless darting was interrupted by a sharp rebuke, “Aye, please behave yourself." This was Priyadarsanan Dharma Rajan, a senior fellow with the Bengaluru-based Ashoka Trust for Research in Ecology and the Environment (Atree). He lifted the bug with a pair of mini tweezers and ushered it into a specimen jar.

Rajan, who is always on the lookout for a laugh, looked up and beamed, “See, it listened!"

Rajan, his two students, Seena Karimbumkara and Jyothi Chikkarudraiah, and I were at the botanical garden at the Gandhi Krishi Vignana Kendra (GKVK) in Bengaluru. Rajan, whose core scientific interests lie in insect taxonomy, ecology and conservation, was out in the “field" because Chikkarudraiah had informed him that one of the fig trees on the campus was in bloom and fig wasps had begun to emerge.

You have to understand Rajan’s scientific obsession with these minuscule wasps to get what a blooming ficus tree might mean. Rajan, who perpetually buzzes with the energy of a bee, is like a homing missile to these trees. When it comes to critter kingdom, he would like everyone to understand how it is that these tiny things rule the world. You could call him an insect evangelist. “They have been here long before us and will be here long after we are gone," he says.

From there, the three scientists led me into a world that is best discovered with your knees on the ground and nose in a plant.

As a child, mucking about plants and shrubs, I was beset with just one concern when I encountered an insect, “Mom, does this bite?" That sentiment, in essence, defines my relationship with the bug world. Even on Google, if you consider it the oracle for humanity’s most pressing questions, typing “insect" will lead you to various means and methods of eliminating them. So as I wandered in knee-high grass in flip-flops, each scrunch made me grimace. I was eager to see what entomologists find under leaves, within barks, in rotting fruit and in mud. 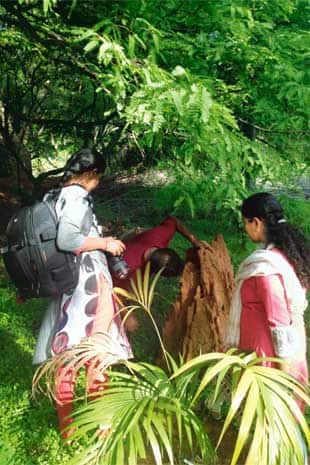 Right before driving over to the botanical garden, I had browsed the collection at Atree’s insect museum. It houses 100,000 insect specimens representing more than 1,000 species; from dung beetles to ants to wasps. It is Rajan’s pride and joy, especially the dung beetles. What clearly aren’t are pretty butterflies. He bats away the question: “Pah, butterflies. Everyone wants to see and take photos of butterflies. They have enough fans. What about the beetles?"

Butterflies are clearly the tigers of the insect world. But you don’t need to book an expensive safari and a lodge to find insects. They aren’t even hiding, really. Just this week, a new species of jumping spider was discovered in south Delhi’s Asola Bhatti wildlife sanctuary.

Initially, of course, you need to be pointed in the right direction. Like Karimbumkara, who focused my aimless vision at an extraordinarily well camouflaged bug on a termatarium. Carrying a tiny mound of dirt and grass on its back, it was hiding in plain sight. Even that contained patch of foliage, through which large ant hills and termatariums popped out, had enough life—love bugs, dragonflies, snails, bees—burrowing and scurrying in and out to keep us occupied for a good 3 hours.

On any summer day, a recent video from the US-based National Public Radio shows, you can look up and know that there are billions of bugs passing directly over, flying along different bug highways of varying altitudes. Cities are not wilderness. True wilderness, in fact, is almost nowhere to be found. But there are patches around us where you might even discover a new species! “Many new species are being reported from heavily used landscapes. For example, when we collected fig insects from Bengaluru, almost a dozen out of 40 species were new. Small green patches—be it a Soppinabetta, or foliage forest, grazing lands, sacred groves or even green patches in the institutional/university campuses—are important for conserving insect diversity," says Rajan. Two new species of ants have been reported from the IISc campus over the last five years.

If you want to take a short trip exploring these little kingdoms, a university campus near you might be a good place to start. Even a small cave, a small pond or a canal has its insect diversity.

Start now, because a team from Stanford University, US, recently warned that Earth is on the brink of its sixth extinction phase, with mammal species disappearing 20-100 times faster than in past extinctions. According to a study published in the Science journal last year, the human population has doubled in the past 35 years, while the number of invertebrates has decreased by 45%. Even clearing small patches of greenery, which could be the last remnant of an area’s original vegetation, could lead to a Centinelan extinction—the disappearance of species before their discovery.

There are an estimated eight million insect species; only about 1.3 million are known. “Most of these species are present in smaller habitats. Centinelan extinction is the biggest challenge to insect conservation," says Rajan.

This is also why the conventional “save tiger, elephant and their landscapes" way does not work for conserving insects, the planet’s most biodiverse component. Other diverse habitats, such as mangroves, dry evergreen forests, Myristica swamps, do not get as much conservation attention. These habitats may not have tigers but provide significant ecosystem services, such as pollination, nutrient cycling and seed dispersal.

The affinity of children with bugs, I think, comes down to one thing—height. They are closer to insect worlds and find dirt/soil endlessly fascinating. Crouching in grass, Karimbumkara recalled how it was a small patch of wild near her house that got her interested in insects as a child. Rajan says: “In the beginning, all of us are insect lovers. Who is not interested in a butterfly or a dragonfly? Who is not curious about how a caterpillar turns into a butterfly? Which kid doesn’t follow ant trails? Or won’t be interested in how a mud wasp makes its nest and fills it with paralysed spiders for its offspring?"

Nowhere else is the purpose in nature’s astounding diversity so clearly visible and easily understood as in the insect realm, whether it is pollination, that gives us about a third of our food, waste- matter recycling or seed dispersal. Watching a dung beetle roll up a ball of dung, or an ant carry a seed, or a bee cover itself in pollen, explains ecology in simple and memorable ways.

Being an entomologist doesn’t mean that you love every little flying bug. Karimbumkara still can’t stand cockroaches. “Ugh, it is awful when they sit on you with those paws. And then you discover they can fly," she says with a shudder.