What next for Dutee Chand? The Odisha sprinter, cleared to run again in international competitions on Monday after a year-long ordeal, is already thinking ahead. Chand said she will need six months to “get back in form".

“I would like to go abroad and train," she said.

The day after the Court of Arbitration for Sport (CAS) in Lausanne, Switzerland, delivered its verdict, lifting the ban on Chand imposed by the International Association of Athletics Federations (IAAF), and suspending the regulation that was the basis for barring the runner, Chand stuck to her routine.

She woke up early, and trained from 6am to 10am.

The aim is to try and qualify for the 2016 Olympics, though time is not on her side.

Her coach, Nagpuri Ramesh, thinks otherwise. “We have enough time," he said. “Dutee has that rarest of rare quality that I haven’t encountered in my 20 years as a coach. She loves to compete, and competition brings out the best in her. This is what has helped her fight."

Chand will aim to compete in the 200 metres race, for which the qualifying time is 23.20 seconds. Her best is 23.56 seconds, for which she won a gold medal at the Junior Asian Championships in 2014 at Taipei, Taiwan.

A year ago, when Chand was at the peak of her prowess, she was barred from competing as a woman. This was based on the IAAF’s hyperandrogenism rule, requiring female athletes to have naturally occurring testosterone levels below 10 nanomoles per litre, the lower end of the average male range for the hormone. Other international sports bodies adopted the rule as well, and it was implemented at the 2012 Olympics in London.

“Why did we go ahead and challenge the verdict? Because we knew that science does not support the regulations; it’s a human rights issue at the end of the day, being able to compete the way you were born. We hope that this is the end of the regulation," said Payoshni Mitra, a Kolkata-based researcher and activist in gender issues in sports, and the main catalyst behind Chand’s appeal to the CAS. 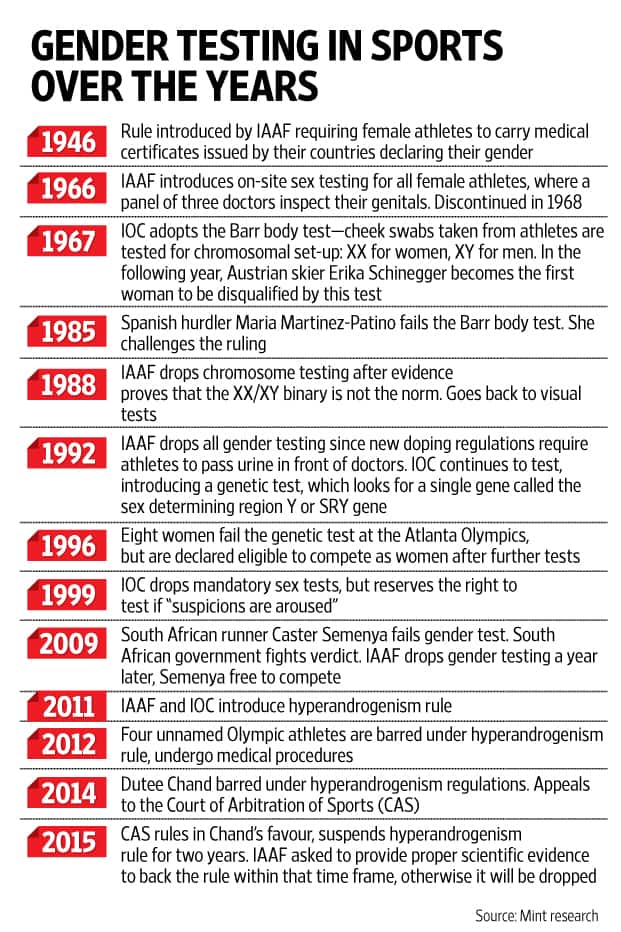 The hyperandrogenism rule is based on the belief that female athletes who produce more than average testosterone derive an unfair athletic advantage from it (testosterone supports muscle growth, among other things).

The CAS verdict noted that it “was unable to conclude that hyperandrogenic female athletes may benefit from such a significant performance advantage that it is necessary to exclude them from competing in the female category".

The fact that no such regulations exist for male athletes, who may have very different levels of testosterone even within a small group of competitors (say the final eight runners in an Olympic 100m), was also noted by the panel of CAS judges.

“The differential treatment between male and female athletes constitutes discrimination on the grounds of sex and therefore contravenes anti-discrimination provisions of the IAAF constitution, the Olympic Charter and the laws of Monaco...which require that the IAAF take all appropriate measures to eliminate discrimination against women," the panel said.

Chand, 19, is the third of seven children of a poor weaver couple in Odisha’s Chaka Gopalpur village. She began running inspired by her elder sister, a former state athlete. By 2013, Chand became the first Indian to reach the final of an international 100 metres event, the IAAF World Youth Championships, before winning the senior national championship in 100 and 200 metres the same year.

Next year, she won both the 100 and 200 metres sprints at the Asian Junior Athletics Championships, before the Athletics Federation of India received an anonymous request to test her for hyperandrogenism. She was banned in July.

Athletes generally have two options when this happens—quit sports or undergo medical intervention involving surgery and long-term hormone replacement therapy to lower the levels of testosterone. Chand decided to fight it in court, telling Mint: “What I have is natural. I have not doped. I don’t deserve the ban. This should never happen to another girl again."

Multiple cases of hyperandrogenism have come to light since the ruling came into effect in 2011, but no athlete has ever taken this step. These tests and their results are meant to be confidential, and athletes, fearing social shame and an end to their careers, quietly accept secretive medical intervention.

At the London Olympics, for example, four female athletes, all 18 to 21 years old and from rural areas of developing countries, were banned under the hyperandrogenism guidelines. They opted for treatment, and were put through surgery to remove internal testes, and a range of cosmetic procedures with little or no bearing on testosterone production: feminizing vaginoplasty, estrogen replacement therapy and a reduction in the size of the clitoris.

Hyperandrogenism, in fact, is just the latest in a long list of controversial and disputed measures that international sports bodies have used to try and monitor the dividing line between male and female competitors. Every one of these measures—from nude parades to chromosome testing—has been overruled over the years on scientific or (in the case of nude parades) human rights grounds.

The CAS ruling also specified that there will be no return to such methods of sex verification as external genitalia examinations or chromosome testing.

Katrina Karkazis of the Center for Biomedical Ethics at Stanford University, who worked with Chand on the case, told Mint that she was thrilled by the decision, but “also very surprised by it".

“I knew we had a strong case, but there are so many culturally entrenched ideas about testosterone—that it is a ‘male hormone’, that it doesn’t belong in women—I knew we were up against those ideas too, and I wasn’t sure that we could overcome them. It feels huge. They’ve had some kind of policy along these lines for over four decades and this is the first time a body like CAS has suspended it."

In 2009, gender testing became a raging issue when South African runner Caster Semenya was barred from competition on gender grounds, and the reports got leaked to the press. The South African government pursued the case aggressively with IAAF and the International Olympic Committee, and it came to light that IAAF’s gender policy did not have a single litmus test for determining sex.

Instead, it relied on consensus, without defining the criteria that must be used.

Semenya was cleared to run, and IAAF was forced to look for another way to define gender, though it officially announced that it had stopped ‘gender testing’.

It came up with hyperandrogenism. From the beginning, the rule had its own set of problems. For example, most athletes with high levels of testosterone, it was found, were also insensitive to the effects of the hormone. It’s called Androgen Insensitivity Syndrome (AIS).

In 1996, a systematic chromosome screening of female athletes at the Atlanta Olympics found that one out of every 423 athletes had AIS—more than 200 times the estimated incidence in the general population.

Some even had CAIS—the ‘C’ stands for ‘Complete’—which means their bodies could not use any testosterone at all. More recently, during the 2011 IAAF World Championships in Daegu, South Korea, another systematic blood testing programme found similar rates of AIS in female athletes.

Martin Ritzen, emeritus professor at the Karolinska Institute, Sweden, and a former member of the IOC Medical Commission, who helped shape the hyperandrogenism rule, was one of the co-authors of a paper based on the Daegu tests, and published in The Journal Of Clinical Endocrinology and Metabolism in August 2014.

Madeleine Pape, a former 800 metres Olympian from Australia, who ran against Semenya, testified to the CAS panel against the hyperandrogenism policy. The verdict reached the same conclusion that the above studies did: “There is no convincing causal relationship between high endogenous testosterone and enhanced athletic performance in female athletes," it said. “There are no published scientific studies that link athletic performance with testosterone concentration in women with hyperandrogenism."

While Chand can go back to competing, what about other athletes who have been banned under hyperandrogenism? Since the hyperandrogenism regulations also had a privacy clause, there is no way of knowing exactly how many athletes have been banned under it since 2011, and how many have already undergone medical procedures, though the IAAF has revealed that 18 athletes have been investigated by it so far, five of which were “concluded".

“We may never know the full extent because you have to remember this is only track and field and these policies exist across a number of international federations and of course the IOC," Karkazis said.

Chand, meanwhile, is determined to forget the ordeal. “The people who were questioning me will now see what I can do," she said.