Istanbul | Across the water and far away

On the other side of the Bosphorus, another continent's noisy open-air markets, dreamy meals, quiet towers and ancient mosques

That Istanbul is the only city in the world to span two continents, that it bridges Asia and Europe, the East and the West, is a fact that nearly every article, advertisement or even casual conversation about the city seems to point out. And yet, despite this distinctive characteristic, Asian Istanbul is strangely ignored by visitors and travellers, for whom it remains no more than a background feature.

The historic riches of the Byzantine and Ottoman eras—the Hagia Sophia (the great Byzantine church-turned-mosque-turned museum) or the imperial Ottoman Topkapi palace, for example—are concentrated in the peninsula that now forms the southernmost tip of the city and is separated from the rest of European Istanbul by the Golden Horn and from Asia by the Bosphorus Strait. North of the golden horn are the districts of Beyoglu, which houses the iconic Istiklal Caddesi (street), and Taksim Square. It would take most tourists days to simply check these sites in the European part of the city off their to-do lists before even thinking of venturing elsewhere in the city.

Years of visiting and living in Istanbul (first as a research student and then a working professional) have given me plenty of opportunities to explore neighbourhoods in the city away from the touristed European parts—just across the Bosphorus. The charms of these neighbourhoods and the prospect of a journey across continents have often been enough to make a trip to the Asian shores more than worthwhile for me.

Since my very first visit to the city, I have spent more time than I care to admit on ferries, experiencing the childish thrill of floating from one continent to the other and coming back. The dome- and minaret-filled skyline—the Hagia Sophia and the Sultanahmet mosque standing out foremost among the others—comes alive for me when I am crossing over to Asia and looking back at Europe.

On the ferries, the vendors selling tea, orange juice, simit (the sesame-seed bagels that are the best carbohydrate-heavy snack ever), the sound and sight of seagulls and water traffic are all special sights and sounds that I associate specifically with water travel in Istanbul.

On the promenades along the Bosphorus, I have watched men stand patiently with their fishing rods even on the coldest days of winter. In summers young boys take turns to jump into the icy-cold waters before climbing back on shore to sun themselves in the unforgiving heat. Here I have always loved people-watching and losing myself in the rhythms of the city. 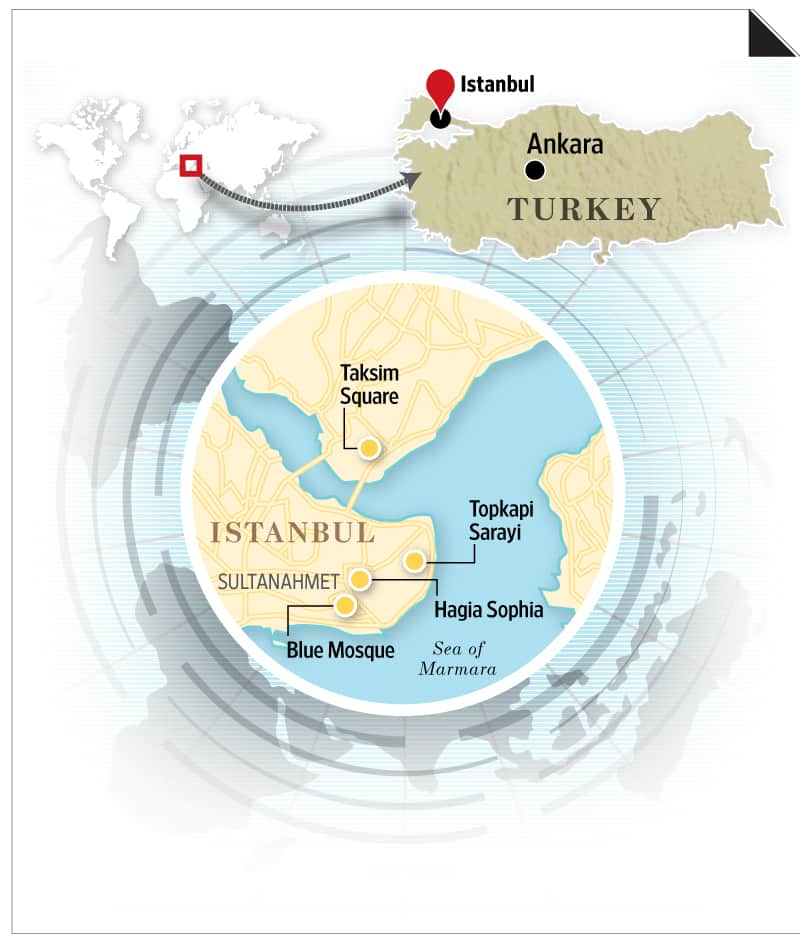 Two of my favourite neighbourhoods on the Asian side of Istanbul are Üsküdar and Kadıköy. The 20-minute ferry ride to Kadıköy goes past two iconic structures on the Asian shore that most visitors might otherwise not even get to see. The first is the sprawling complex of the Selimiye barracks. It was in these barracks that Florence Nightingale cemented her reputation as a caring nurse, making rounds to care for the wounded at night, lamp in hand. While the barracks are still used by the military, visitors can visit the Florence Nightingale museum within the barracks to see her room and some of her belongings.

Also en route to Kadıköy is the Haydarpasa Terminal (also a ferry stop), whose building was a gift to the Ottoman sultan by the German kaiser Wilhelm II. I have always thought of the station as a Bavarian castle gone Oriental. Once a lynchpin in the plans for a Berlin-Baghdad railway line, Haydarpasa today links Istanbul to other cities in Asia by rail.

Kadıköy itself boasts of a market that has the kind of fresh produce one would expect in a Mediterranean climate—I particularly love the sight of the plump tomatoes, fresh fruits, olives and endless varieties of fish (I once spotted a massive shark for sale at a fishmonger’s)—and endless rows of cafés, wine houses and restaurants.

Unlike Kadıköy with its more secular charms, the neighbourhood of Üsküdar in the north is often considered a much more conservative area, an assessment that isn’t wholly accurate—and belies Üsküdar’s very mixed demographics (having lived in the neighbourhood for the better part of a year, I consider myself something of an expert on it).

Üsküdar boasts of some fantastic architectural gems—because it was the closest site in Istanbul to Mecca, a number of the Ottoman elite built mosques here—in particular a number of mosques built by Mimar Sinan, the chief architect of Süleyman the Magnificent.

Perhaps the most charming is the modest mosque of Semsi Pasa, right in front of the waterfront. The mosque’s madrasa has now been converted into a municipal library. The adjoining tea gardens and cafés offer a great spot to sit and enjoy the view across the Bosphorus. One of Istanbul’s most distinctive landmarks, Leander’s Tower, sits on an island in the Strait close to the Asian shore.

This squat tower is associated with a number of myths, the most popular referring to the Leander from Greek mythology who died trying to swim across the straits to visit his lover Hero in the tower. This isn’t the only passionate romance revolving around the crossing of continents. A popular Turkish folk song, Üsküdara gider iken ( en route to Üsküdar ) tells the story of a young Ottoman woman who falls in love with her male clerk while they make the journey to Üsküdar from the old city in the rain.

A highlight of my explorations has been Çiya, perhaps the best restaurant in the city. Owner-chef Musa Dagdeviren is a culinary anthropologist who has made it his mission to revive traditional regional recipes and elevate to a higher gastronomic plain dishes more generally associated with homely meals, whether that be the humble kısır (a kind of Turkish tabouleh), yaprak sarmasi (stuffed wine leaves) or simple pilaf ( pulao /rice) dishes.

Rarely is a meal at Çiya not a profoundly moving culinary experience. I still occasionally dream about a sour cherry and meat stew that I once ate there.

Such reveries, along with visions of domes, minarets and skyscrapers, have always rewarded my forays into the Asian side of Istanbul.

Vedica Kant is an independent researcher and writer based in London. She is currently working on a book about the Indian experience of World War I.

Turkish Airlines flies daily to Istanbul from Delhi and Mumbai. Round-trip fares start at around 30,000.

Istanbul has a hotel for every budget, from backpacker hostels to luxurious five-star hotels. The best area for visitors to base themselves continues to be Sultanahmet in the old city. Hotels around Taksim Square, while well-located, have over the past year been affected by the anti-government protests in the neighbourhood.

On the Asian side, the neighbourhood of Moda (a 15- to 20-minute walk from Kadıköy) boasts of excellent views of the sea of Marmara, lovely tea gardens and restaurants. Similarly, Kuzguncuk (a similar distance from Üsküdar) is a charming neighbourhood that was home to Jews, Christians, Armenians and Turks in Ottoman times. The neighbourhood has a number of well-restored, Ottoman-style houses.

Çiya Sofrası in Kadıköy serves excellent traditional Turkish food. Baylan Patisserie in the same area is something of an Istanbul institution and worth a visit for its famous ‘kup griye’, a vanilla ice-cream sundae with generous helpings of toffee and caramel sauce. Kanaat Lokantası in Üsküdar might look unpretentious but serves some excellent food.