Slo’ and easy in Slovenia

Here we are, three women pushing 40 (one, in fact, pulling away), a couple of children between us, aged 3 and 13. Not the kind of motley group about which either Farhan or Zoya Akhtar would scramble to make their next road trip movie. But here we are, driving through Slovenia in a Mercedes, constantly thrilled by how short the distances are, how scenic the routes are and how cheerful the locals are.

Whenever I mention Slovenia back home, people ask, you mean Slovakia, don’t you? “No, thank you, I mean Slovenia." But why Slovenia, they continue. In fact, where is Slovenia?

This country in Eastern Europe is so little and so laid-back that even visitors who throng Italy and, of late, Croatia—both neighbours—tend to ignore its existence. I am not admitting anything here, but we ourselves may or may not have chosen Slovenia by throwing a dart on a map of Europe.

This is also a country that once belonged to the erstwhile Yugoslav bloc. It was the first, along with Croatia, to declare its independence, in 1991, after a war that lasted for exactly 10 days. There was none of the heartache and carnage that other Yugoslavian break-offs went through.

I notice in my drive through the country that the spirit of peace and friendliness that must have kept Slovenia sane through those traumatic days remains unchanged. Everyone, but everyone, has a ready smile. And in the capital city of Ljubljana (pronounced Lyoob-lya-nah), I find that the national hero, unlike the norm elsewhere, is not a political or military figure, or even a religious leader, but a poet.

France Prešeren, after whom Ljubljana’s main square is named, and his Romantic poetry have found their way into Slovenia’s national anthem. His statue stands in front of the salmon-pink Franciscan Church of the Annunciation right at the square, alongside a statue of his muse and sweetheart, Julija Primic.

Another unlikely hero here is Jože Plecnik, an architect credited with breathing fresh life into Ljubljana, after much of the city was razed by the earthquake of 1895. The Triple Bridge, which spans the Ljubljanica river and connects the old and new towns, and the covered market, where I spent an entire morning sampling cheeses and soups and bargaining with artists over Slovenian ceramics, are his creations. There are few signs of the former communist Yugoslavia; where are the ugly, regulation buildings? Classy Art Nouveau styles take their place, best showcased in the Dragon Bridge built in 1901, with its four mock-fierce dragons perched on each side, wagging their tales—as the Slovenian legend goes—when a virgin walks by. “Have you been on the bridge yet?" locals have been known to ask perfect strangers who stop to ask for directions. Everywhere in the city, there seem to be groups of people just happy to be out in the mild Slovene sunshine. But then, I think that if I lived in a country that worships its creative geniuses, I would probably be delirious.

Walking on the almost empty streets late into the night, I can hear raucous laughter from the alfresco cafés, gelato booths and wine bars, especially those along the riverfront. The buskers who keep the air filled with music through the day have long retired, but young people stand in small circles around Prešeren Square and strum their guitars, humming tunes that are catchy, unidentifiable.

Ljubljana is a young city in more ways than one. About a fifth of its almost 300,000 inhabitants are students. This capital of one of Europe’s most recent democracies is also set to celebrate its 25th anniversary as a city—in the modern sense of the word—next year. Yet it is an old culture; last year, it celebrated 2,000 years since its initial foundation as a Roman settlement.

The spirit of bonhomie travels with us as we pull into the town of Bled a few days later. Though it’s home to the country’s largest tourist attraction, Lake Bled, the noise and bustle of Ljubljana is absent. The days are dull, rainy; unseasonal for this time of the year. At the village we are staying in, away from Bled, we find that the locals are relentlessly reassuring. Sunny tomorrow, next week, they promise. They have taken it personally: These amiable women have come all the way from India, they say, not to forget these two sweet girls, and we greet them with such foul weather? Braving the drizzle, we drive to the lake, which graces every other picture postcard sent out from this country. It is the stuff of fairy tales. Think pristine lake with an island with a church at the centre. Overlooking it, a medieval castle perched high up on a hill. And surrounding it all, the snow-capped Julian Alps casting a protective embrace. The sight is so stunning that we even forget to check our phone weather apps for an hour. We hop into a pletna, a type of wooden boat, rowed by an attractive Slovene. They stop short of crooning, but these rowers could put Venetian gondoliers to shame with their good looks and witty charm. The 17th century Church of the Assumption on the island has 99 steep stone steps, easy enough to walk up in the crisp morning air.

At the top, I offer a moment of silence for the grooms who, according to tradition, have to carry their brides up these steps to the church; a test of their loyalty as much as fitness. The mist begins to clear as the sun peeks out tentatively from behind the clouds, the silence broken only by the pealing of the “wishing bell" by the devout and the hopeful.

Driving through this country is sheer joy, especially for the delightful little towns with unpronounceable names on the way, every one of which we want to stop at. Of these, Škofja Loka, the best preserved medieval town in Slovenia, emerges as my favourite, with its main street scattered with old buildings of colourful facades and ornate windows. Another day, I find myself looking at a stunningly pretty lady demonstrating the fine art of gingerbread-making—lost to the younger generations, she rues—at Radovljica. This town is not really on our day’s itinerary, but who can resist a place with a gingerbread museum? And what is the point of a road trip if not to stop at will to see such quirky, delectable offerings?

I am torn when it comes to telling people to visit Slovenia. It is as yet untouched: The tourist hordes have not discovered its virginal beauty while trampling all over other parts of Eastern Europe. It is a secret I want to hug to myself, for it to stay unspoiled, undiscovered.

Yet, given how pretty and friendly the country is, I want to urge travellers to go to Slovenia, and go now, before the tour groups descend upon it. Already, in Ljubljana, I hear that the mayor had come out in ceremonial welcome when an Indian film crew made its way there to shoot for a song sequence. And in Lake Bled, when I walk into a restaurant serving vegetarian cuisine, I see signs in Mandarin and Hindi, the latter imploring people, “Kripya dhoomrapaan na karein (Please don’t smoke)."

Of course, urging people to visit the country is a piece of advice I may come to regret. Ah, well. 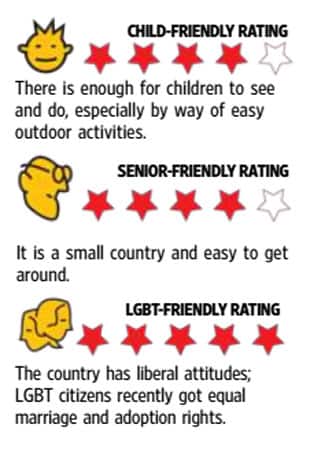 There are one- and two-stop connections from India on several airlines, including Swissair and Turkish Airlines

In Ljubljana, the G Design Hotel and Adora Hotel are recommended; in Bled, Hotel Triglav scores on location and charm.