Ari Jayaprakash’s debut graphic novel The Kuru Chronicles, based on the goddess Kali, will be launched at CounterCulture, with a display of over 400 frames from the book, followed by a live music gig. Jayaprakash is an artist and photographer and with this novel, he follows the rise of Kali and the end of kalyug. The launch will also feature visuals, music and a display of artwork. The Kuru Circus and Orchestra will present KuruShetra—a rock opera album with soundscapes developed by Jayaprakash to help with the visualization of the story. 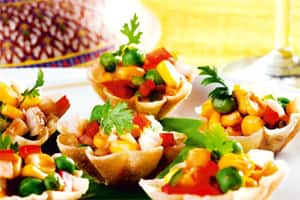 The Blues and jazz band from Shillong, featuring Rudy Wallang and Tipriti “Tips" Kharbangar on guitars and vocals, will be playing in the city this fortnight. Their gig, however, will feature after an opening act by the Bangalore folk and fusion rock band Lagori, which comprises Shashank V. on vocals, Geeth Vaz and Edward Rasquinha on guitars, Shalini Mohan on bass and Vinyl Kumar on drums.

JamBus is a tour/travelling music festival inspired by the jam-band scene of the late 1980s and early 1990s in the US, when like-minded bands like Phish, Blues Traveler, moe., etc., went on tour together and played in new places. Something Relevant, the 10-member jam band from Mumbai, will come together with Caesar’s Palace, a five-member funk/Blues rock outfit from Bangalore, to pay tribute to Phish and other jam bands. Apart from their home venues, the bands will be touring Delhi, Kolkata and some other cities.

This exhibition of prints by six artists—Aishwaryan K., Chaitra Puthran, Madhvi Reddi, Naveen Kumar A., Urmila V.G. and V.G. Venugopal—will have woodcuts, etchings, dry point engravings and lithographs on materials such as wood, zinc and copper plates and linoleum. The gallery has also announced an open house at this exhibition for artists to meet and collaborate on projects.

Based on Wolf Erlbruch’s award-winning children’s book of the same name, this play has been directed by Martina Couturier and produced by the theatre group Couturier Und Ikkola. This production was one of the 10 most notable German children’s theatre productions at the Augenblick Mal! festival in Berlin in 2009 and the winner at the Icarus festival that year. Duck has lived a calm and quiet life till an unexpected guest shows up at the lake—Death. After the initial fear, Duck invites Death to bathe. Slowly, the two come closer; even Death is a little sad at the inevitable end—but that’s life. Death, Duck And Tulip is about the troubling aspects of childhood. In a press note, theatre person and actor Arundhati Nag of Ranga Shankara rates this play among her all-time favourites for children: “After we are born, death is the only other finality. This play demystifies and poetically displays to children that death need not be feared". Children aged 5 and above can watch the play. 1 hour.

A solo performance by Ragashree Komandur, granddaughter of Revathi Narasimhan, founder of the Bangalore-based dance school Natya Niketan, and student of US-based Kripa Bhaskaran. Komandur will perform a series of individual pieces from the traditional Bharatanatyam repertoire.

Replicas of quirky cow art can now take up permanent residence on your mantelpiece. The whimsical titles of the works—‘Udder Construction’ and ‘Homage to Picowso’s African Period’—are as quirky as the figurines themselves, which are handmade miniatures of the bovine art installations that featured in ‘CowParade’. ‘CowParade’, which originated in 1998 in Switzerland, is the world’s largest public art event—over 6,000 artists have contributed works with the cow as their canvas, in an effort to bring thought-provoking art to the city’s streets. The figurines have travelled to 75 cities in 32 countries, and have been brought to India exclusively by Archies. Archies is celebrating Rakhi, which is on 2 August, with this new offering.

An exhibition of photographs from the personal archives of Pablo Bartholomew, Philippe Calia, Tenzing Dakpa, Sharbendu De, Adrian Fisk, Sohrab Hura and Akshay Mahajan. The show hopes to “establish the documentary as well as artistic value of these various personal diaries," says the press note. While Bartholomew’s Outside In: 70s and 80s—A Tale of Three Cities is a collection of black and white pictures of acquaintances from his teenage years, Dakpa chronicles an intimate relationship in Vez & Me.

British photographer Fisk, who moved to India in 2003, observes life in the growing

metropolis in Dilli Purani Dilli Naye, and Hura turns the lens on his life, capturing a sentimental journey of youthful doubts and contradictions in Life Is Elsewhere. 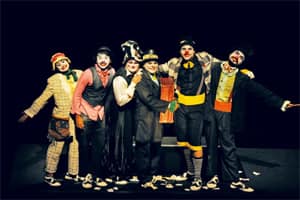 Why is humour difficult? Get answers at this workshop on English comedy writing, where you can construct your own scripts and create screenplays for stage, stand-up comedy acts, TV and films, invent characters and learn the important aspects of direction and editing. This workshop will be conducted by playwright and stand-up comic Anuvab Pal. His play, The Bureaucrat, will be staged too.

Literary critic and cultural activist Ganesh Devy will talk about why Indian languages are disappearing rapidly. Founder of the Bhasha Research and Publication Centre and the Adivasi Academy, Tejgadh, Vadodara, Devy writes in three languages—Marathi, Gujarati and English. Till 1996 he taught English literature at the Maharaja Sayajirao University of Baroda. He left his academic position to take up the work of conservation of threatened languages. He has initiated a survey of India’s languages, created scripts for 11 languages existing in the oral tradition, and promoted and published literature in 26 languages. He has also played a major role in reviving Bhili, spoken in parts of west-central India.

Veteran painter Krishen Khanna will read from his friend J. Swaminathan’s unpublished autobiography. Swaminathan was one of the founders of the artist collective Group 1890 in 1962, and well-known for using geometric motifs, folk and tribal symbols in his art.

Karachi-born Sharmeen Obaid-Chinoy turns controversial subjects into films—such as a look at Afghani refugee youth (Terror’s Children), xenophobes in South Africa (The New Apartheid) and female activists in Saudi Arabia (Women of the Holy Kingdom). In Saving Face, Obaid-Chinoy and co-director Daniel Junge investigate the horrific and widely prevalent practice of acid attacks in southern Punjab in Pakistan. The documentary interlinks the stories of survivors with that of the London plastic surgeon Mohammad Jawad, who periodically returns to his homeland to perform reconstructive surgeries on the victims. 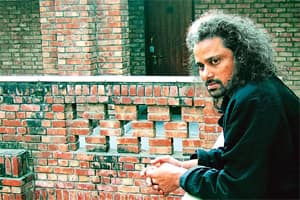 ghese is from Kerala and lives in Chennai. When asked about it, he clarifies with a laugh, “I spent a lot of time in Santiniketan and I love Rabindrasangeet." Before he went to study at Visva-Bharati University, Varghese was a student learning mridangam. At Visva-Bharati, while learning Hindustani classical vocal music, he was attracted to the music of Pandit Vishwa Mohan Bhatt, and became his disciple. Varghese plays the guitar and the Mohan veena.

The Shakey Rays is a Rhythm and Blues (R&B) and rock ’n roll band from Chennai, driven by the singing and guitar-playing songwriting duo Dhruva Gautham and Vikram Kannan, and supported by drummer Niranjan Swaminathan and bassist Iuni Yooni. Shashwat Pande is a Delhi singer-songwriter and is steeped in the Blues and British folk of the 1960s and 1970s, with influences such as Bert Jansch, Nick Drake, Sun Kil Moon, Skip James, Bob Dylan and Robert Johnson.

The Sound of Music

The story of Maria, Captain von Trapp and the seven singing children, set in the period just before World War II, comes to Delhi. Songs we know and love from the Rodgers and Hammerstein classic musical will be presented on stage by Theatricks. The play is directed by James Carroll, with musical direction by Tim Anderson and choreography by Kate Pooler.

The theme of the exhibition revolves around performing arts. Four of the artists whose works are on display—A. Ezhumalai, K. Guru Suraj, Udayasankar and A. Isai Arasi—are from Chennai. The two others, Varunkumar and Renu, both sculptors, are pursuing their master’s in fine arts from Rajasthan University, Udaipur. 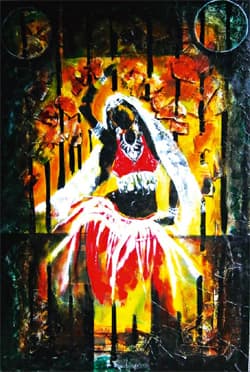 Art on art: A group exhibition

A sumptuous platter especially prepared for the holy month of Ramadan will be on offer. Indulge in a rich spread of falafel, kabsa, yalla shawarma, pittazza, joojeh kabob, biryani and other West Asian street food.

The InKo Centre will present a workshop, based on selected scenes from the movie ‘A Flexible Woman’, with the film’s director, Tatjana Turanskyj. The film is about Greta, an architect and single mother of a son, who’s about to lose her job—and the ground under her feet.

What do three fretful men do in a park? They tend to prefer sitting on isolated benches in the shade of trees. In this Hindi play presented by theatre group Sifar, one sits and reads a book, another takes a power nap, and a third fixes his eyes on something exotic to find peace of mind. 1 hour.

Creative tension between tradition and trends in design

Creative designers from the city will discuss their work in the context of the rich Hyderabad tradition, juxtaposed with contemporary designs, trends and innovations in national and international markets. The panellists include graphic designer Samir Patra, jewellery designer Suhani Pittie, textile and crafts designer Bina Rao, and animator Dileep Varma. The discussion will be moderated by art historian Rasna Bhushan. 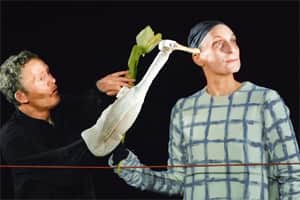 Inspired by Wolf Erlbruch’s book ‘Ente, Tod und Tulpe’ (‘Duck, Death And Tulip’), the play by the same name will be staged in Hyderabad as well as Bangalore. It’s considered one of the top 10 theatre plays for children and won the Berlin Theatre award in 2009.

Aravind Tambad, an Indian Institute of Management, Calcutta graduate, is also a photographer. Known for his urbanscapes and portrait photography, this debut solo exhibition showcases photographs depicting the City of Joy—Kolkata—and the way people interact with it.

The Siddha Group, Calcutta Classical Guitar Society and Bickram Ghosh will present Siegfried Debreban or Sig in concert. France-based musician, photographer and film-maker Sig stands tall in the world of classical piano improvisation. Sig’s experimental free-style playing has given the universe of piano a new contemporary sound. His style is a crossover from classical to abstract hip hop and jazz.

The Rapture of Form