The rules of feedback

Whether it is praise or criticism, managers should communicate with their team members regularly and precisely

A senior programmer at a bank emerged crestfallen from his performance review. Not only had all his hopes for a promotion been dashed, his attention had also been drawn to some serious shortfalls in his performance. If only these gaps had been pointed out earlier, he thought ruefully, he could have made amends.

This scenario is not unheard of. Managers, lost in the labyrinth of transactions, and reeling under the pressure of targets, often overlook their responsibility towards observing, monitoring and sharing feedback on performance and behaviour in real time with their reporting members. While feedback is inarguably one of the most potent tools for shaping behaviour and fostering performance, its efficacy in guiding and motivating people is often underestimated. Mumbai-based Zeena Paynter, vice-president, human resources, IDBI Capital, says, “Managers, torn between task and relationship, often perceive developmental feedback as difficult and distasteful. As a result, they evade or postpone it to a later date. So much so that it tends to be forgotten, especially if the work is moving ahead as required." Paynter attributes this tendency to a shortfall in skills in delivering effective feedback, as also the ignorance of the value of feedback in motivating employees and contributing to the organizational growth. 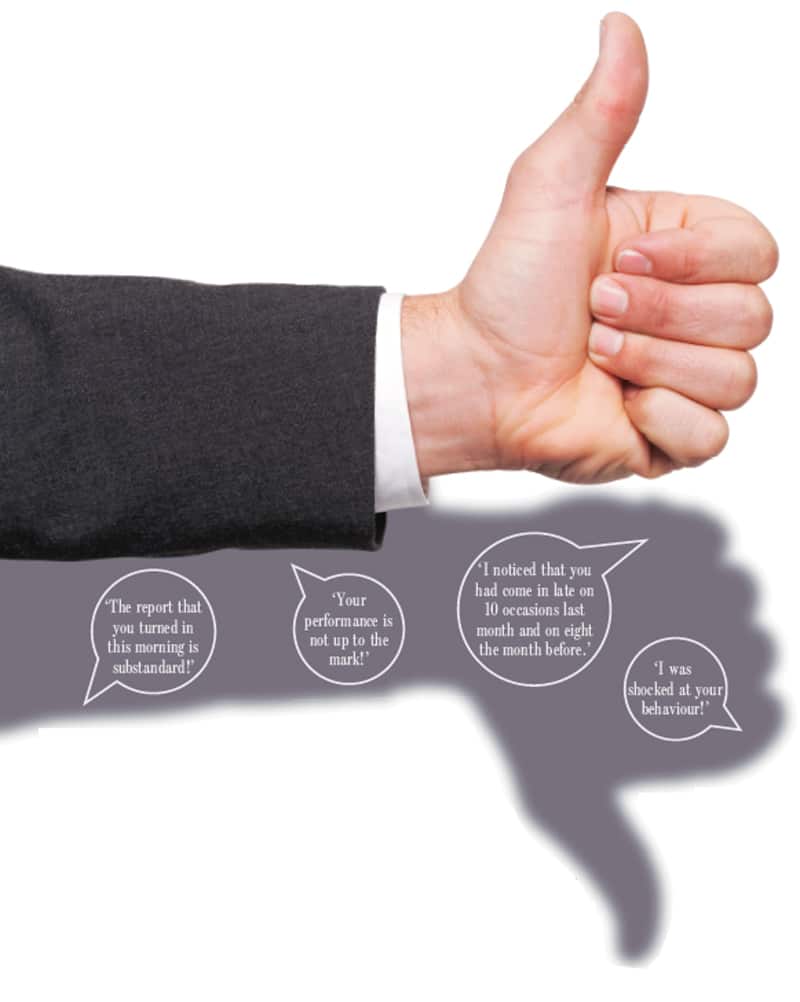 Praise and positive feedback are not synonymous. While praise has an aura of positivity, it does not point the person to the specific behaviour or performance elements that need to be carried forward. For instance, the comment “Great job!" at the end of a project does not tell the person exactly what was “great" and should, therefore, be continued. It is best if any feedback follows three broad parameters—stating what you, as the manager, have seen; explain the impact of the action; and ask for views and listen to the response.

A conversation like the one below may be more engaging.

State what you have observed:“I appreciate the way you have led project XYZ. The project adhered to the prescribed timelines and quality standards. And your leadership qualities were evident in the way you got the best out of the team. I noticed that person X, who had been performing below par, appeared to be energized and engaged. And person Y, not usually known for great interpersonal skills, gelled extremely well with the team."

Explain the impact:“The applause from the client and senior management has not only energized the team, but is likely to get us some interesting projects in the near future."

Ask for views and listen to response:“What is your learning from this project? What would you do different next time? Is there something that you would like to share with the team?"

Similarly, criticism is often synonymously used with constructive or developmental feedback. Consider the comments below.

“The report that you turned in this morning is substandard!"

“I was shocked at your behaviour! I had expected that you would handle the situation with greater finesse."

“Your performance is not up to the mark!"

These statements are vague and judgemental, striking at the person, not the behaviour. They are clearly a recipe for disaster, as they are likely to put the employee on the defensive, leading to an argument. Kaviarasu R., chief manager—learning and development, Asian Paints Ltd, Mumbai, says, “Feedback needs to be contextual, pointing the employee to the specific behaviour or performance element that needs to be curtailed or amended. To be effective, it should engage a person in a dialogue, be supportive in intent, and be given in the spirit of facilitating a change, rather than punishing or threatening."

A conversation like the one below incorporates some of these elements.

Be specific and state facts:“I had a concern which I wanted to talk about. I noticed that you had come in late on 10 occasions last month and on eight the month before."

State the impact:“This has resulted in some of your customer calls either going unattended or your team having to fill in for you. This is setting a wrong example for the trainees, besides affecting our customer service and putting a strain on your relationship with your team."

Ask for views, listen to the response and conclude it with a mutually agreeable action plan: “What are your thoughts around this? What could you do to address this? Is there something I could do to help?"

Kaviarasu adds, “This framework, built upon direct communication, tends to work better in the Western context. In India, we have a preference for a communication style that is inherently implicit, lined with an element of passiveness, and requiring a certain degree of discernment on the part of the listener to comprehend the message. This might be one of the reasons contributing to the discomfort of managers while engaging in a feedback conversation." Mukherjee says in agreement, “We are culturally inclined towards indirect communication even in our personal lives. This is typified by fathers delivering feedback to children through the mothers. This tendency is then carried forward to the workplace."

The key to effective feedback lies in adequate preparation in terms of understanding the context clearly, and gathering the relevant data, facts and observations. In addition, it would be pertinent to think through a set of appropriate actions that might help address the issue at hand. However, it is important to curb the instinct of being prescriptive, as the employee is likely to have a greater ownership of the action plan, if it has been orchestrated by him. You can, of course, add value by offering ideas and suggestions, in case you find him struggling or going off on a tangent.

Feedback works best when it is facilitated as a dialogue in which both manager and employee participate and contribute. According to Kaviarasu, the effectiveness and receptivity of feedback is enhanced when the manager extends the courtesy of seeking permission, by saying something like, “Could I share some thoughts with you?", instead of giving feedback as a matter of right. A similar consideration at the end, by inquiring whether the conversation had been constructive from the employee’s perspective, would work wonders, too.

Follow the principle of “As you see it, say it!" Feedback works best when given in real time or reasonable time. Feedback, either positive or constructive, ceases to be therapeutic, if not timed right. Imagine a situation where you start to appreciate a job well done, and the employee, as a result of the elapsed time, looks quizzically at you wondering what you are talking about. Conversely, acting too swiftly, when emotions are running high, is also inappropriate. Time your feedback to ensure that the dust has settled and the employee is in a receptive mood. Additionally, schedule sufficient time for the conversation, as it would be a shame to have to abort it, or cut it short, because of an impending meeting or engagement. Uphold the dignity of the individual by ensuring that the conversation is out of earshot of other people.

An organization that sports a feedback culture recognizes it as a catalyst for growth, and encourages people to be mirrors of one another. Giving feedback, therefore, is no longer just a manager’s prerogative, as people are comfortable giving and receiving feedback across levels. “To integrate this into the grains of organization’s culture, the top management needs to set the tone and tenor by becoming role models," sums up Paynter.

Charu Sabnavis is a trainer and consultant in the area of people development.