Sanjay Purohit has just returned from a trip to the US. He and his wife Apurva had gone there to “drop" their 18-year-old son Siddharth at Boston’s Northeastern University.

“What advice do you give an 18-year-old who doesn’t want to listen to mom and dad, and is miles away?" reflects Purohit. “I told my son that there is no substitute for hard work; if he is considerate to people, he will be successful; and if he reflects, more often than not, he will figure things out," he says, as we sit down to chat in his sunny, glass-walled cabin at the Levi Strauss and Co. India headquarters on Bangalore’s Commissariat Road. Standing tall, with a deep voice and a smile that seldom goes away, Purohit adds, “We are empty nesters early on in life."

In a deep blue Denizen shirt and non-denim Levi’s trousers, the 46-year-old managing director is probably the brand’s best endorsement. He says he has switched to Levi Strauss products in the last one year, since he came on board. His shoes, though, are mostly from Cole Haan and Clarks.

The fourth-floor office is unassuming, bearing no resemblance to the striking red stores that sell the world’s most iconic jeans brand. Post-lunch, the office is buzzing with people streaming in and out of the many small rooms that lace a curved corridor.

Purohit, who has completed 14 months in the company after an 11-year stint at Cadbury India Ltd in Mumbai, says the San Francisco parent office is cool—and he would prefer something like it in India. “We’ll transform this office too," he says.

But his more serious role in a difficult retail environment is twofold: to grow the company exponentially and profitably, and to build the organization and processes, both in terms of talent and capability. “The biggest requirement of a new company head is continuing growth. And while you have to deliver in the immediate quarter, you also need to look at long-term growth," he says.

While China is a bigger market than India in the Asia-Pacific region, Purohit says strong brand equity, and what it means to customers, makes India unique in the Levi Strauss world. “Therefore, the opportunity is outstanding."

It’s in the jeans: Purohit has just bought himself an Audi Q5 and loves Bangalore for being able to play golf all year. Jayachandran/Mint

“The broad vision is to have a two-brand portfolio, with Levi’s as the super-premium and premium brand and Denizen in the value segment," Purohit says.

The Denizen transition, in hindsight, was an outstanding thing to do in an emerging market, he says—there are “three Indias in India", the super-premium, premium and value or mass segments, and one needs to cater to all of them.

I ask him about the other transition in his life—from chocolates to clothes.

Newspaper reports in 2010 cited his not being given a satisfying role in Cadbury after it was acquired by Kraft Foods Inc. as the reason for him leaving. Purohit says he loves food, and remembers his years there as “an emotional journey" and “the experience you gather from being in a stodgy company, and then to be part of a company which revived it". He quit Cadbury as executive director, India marketing, Asia chocolate category.

He says matter-of-factly that Levi Strauss offered him a chance to be part of an emotionally relevant brand like Cadbury and an opportunity to head a business.

Purohit has more than 23 years’ experience of managing businesses and brands in different consumer product industries, from apparel to food and confectionery, oil and gas, paints and luggage. He’s had stints with Mobil Oil, Asian Paints, Aristocrat Luggage and Goodlass Nerolac Paints in marketing, business development, strategy and sales. But like food, he says, “apparel makes you so much invested, you like to come to work".

His 11 years at Cadbury probably tested the marketing and finance skills he picked up at the Indian Institute of Management, Bangalore, more than the mechanical engineering lessons he learnt at the National Institute of Technology Karnataka, Surathkal.

Analysts who track the retail sector say Purohit was a top performer at Cadbury—a key leadership member involved in damage control when the worms-in-chocolate crisis, easily one of the worst in Cadbury’s history, broke out in 2003 in India—and was brought in to increase Levi’s market share in India. 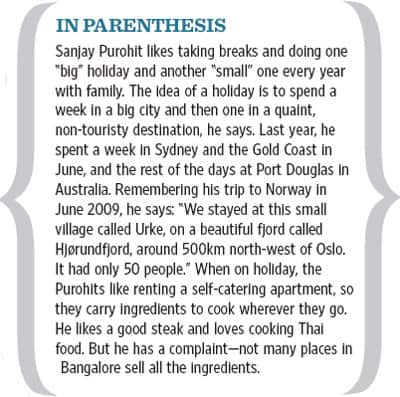 Apparel retailers faced another challenge when cotton prices soared to ₹ 62,000 a candy (a candy is 365kg), pushing up garment prices by 20-25% between 2010-11. A candy cost about ₹ 40,000 as of September. Sales have been hit, and retailers are now depending on big discounts to offload inventory—they are also relying on innovation.

Last year, Levi Strauss introduced custom-fit jeans for women, to fit the curve of their bodies. Nearly 60,000 body types were researched across the world before zeroing in on four—slight, demi, bold and supreme. The supreme variety is not available in India.

“This was great because so many women, including my wife, had earlier complained that the jeans don’t fit them," says Purohit. Conversion rates, or a calculation of actual sales in stores, have shot up to 90-95%, he says.

During the early months of his current job, Purohit would travel a lot, visiting stores across cities. Now, he travels for about a week to 10 days in a month. On other days, though, he works for about 10 hours a day and likes taking work home. Even on weekends, when he works for a few hours, he says he never stops thinking about work. “I chew the cod and like to reflect on a few things that happen during the day. Solutions come out of reflections."

He confesses to checking his email once a day. He glances through what is important, and believes the need to respond to emails stems from “the inability to differentiate between urgent and important".

Ask him if he has a retirement plan, and he speaks of the Clint Eastwood-directed film Unforgiven. Though successful, he says, Eastwood was a one-dimensional actor till he hit the age of 60 and started directing. “He is an inspiration. If I am productive till I die, I would love to do different things like that, those that would make a difference," he says.